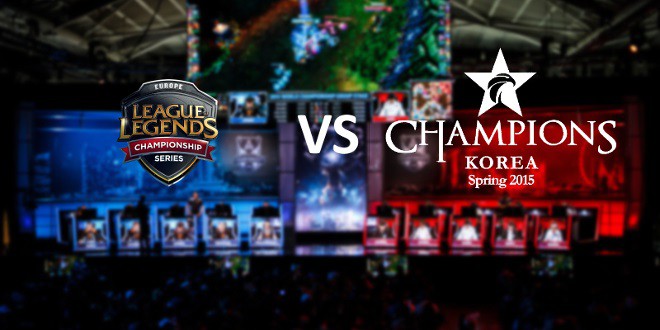 Let’s take a look at some of the most popular leagues for us Westerners: NA/EU LCS and the Korean LCK. What are the pros and cons of both structures? Which format is better?

League of Legends has got several different organisations organizing the big tournaments and leagues, such as Riot themselves for North America and Europe and Tencent for China. There exist different cultures and population sizes, what explains the various sizes of the respective leagues. Furthermore the formats are customized.

It is to note, that the Korean league got a massive overhaul at the beginning of 2015. Instead of the sixteen teams participating in three separate tournaments over the course of a year, which consist of a bracket stage and playoffs after, there are now only half the teams left. The reasoning behind the changes is that, each of the organisations used to have two teams in the LCK. The new rule says that only one team per organisation is permitted. With the Summer Split 2015, the Korean league will be expanded by two additional teams, but the system remains the same.

The biggest differences between the West and the Koreans are that, in the regular season, the matches are played in a Bo1 in the LCS and in Korea, they are played in Bo3s. Also the placements into the playoffs are not the same.

Integrity of the competition

Riot has been advertising for the LCS with this term for ages. The aspect of competition always comes first. Thus the audience, or the worth of entertainment, is to be put second. If you picture this, Riot would rather have a perfect competition without any audience, than a spectacular event with a terrible format. But is Riot really keeping their promise?

These are the conditions, a perfect competition should be provided for the players:

In the LCS the total number of games in the regular season is locked, the teams know exactly how many games they have to play and who their opponents are. The only possible additional games are tie-breakers, which results in nineteen games at max before the playoffs. In Korea it is slightly different: Because the encounters between the teams are Bo3s, victories can be achieved by a 2-0 or a 2-1. So a team‘s number of games vary from 28 to 42 in total, which leads to inconsistency for broadcast lengths. An event with two matches can last between five and ten hours, whereas the regular LCS broadcast length is pretty much set in stone.

With the removal of super weeks in the LCS, all teams now have enough time to prepare for two opponents per week, by which a random factor is gone. How many games a team has to play, depends on the general size of the league, so that every game matters. Looking over to the LPL in China, you can observe some teams not taking a game very seriously, due to the vast amount of games, they have to play.

The aspects of mechanics, strategy, mentality and psyche, teamwork and decision making in the short and long term define, whether a team is good or bad. While most of these things cannot be influenced or measured by the tournament format, there is something that can be: the ability to adapt. The Bo1-format does not allow any team to reach their full potential. A team with smart minds behind them should be able to adapt to different situations within a short span of time. Opponents could try to surprise you with unconventional picks and strategies, which was demonstrated by UOL in the EU LCS Spring Split 2015. It was clear, how their non-meta tactics and chaos could put their opponents off their game, without any possibility to react. Many teams were run over and had no chance to counter this weird playstyle, due to the lack of a second game.

So why would Riot tolerate something like this, when their motto was to put the integrity of the competition in first place? One plausible answer could be, that Riot wants to display a professional broadcast to the audience, by having relatively fixed airing times, like in traditional sports. For example, a regular football game lasts for 90 minutes in the regular period and the coverage has got a fixed length as well. To minimize the variance of broadcast length, the number of games per day is set. With Riot using the LCS primarily to advertise the game, it is quite understandable to make this move, but it sacrifices the possibility for teams to be able to adapt.

In Korea, however, the random factors are mostly non-existent, because a match-up can last up to three games. The Bo3-system does not allow cheese to win a whole series and presumably makes the better team end the day with three more points.

Teams, which consistently show good performances in the regular season, shall be rewarded appropriately, just like bad teams shall be punished. How every single game is weighted, depends on their significance. In the LPL, in China, a team has to face other competitors 22 times in the regular season, each time in a Bo2-series. The result is, that the teams do not take every single game, out of the total 44 games, seriously. This led to distortions within the table and power rankings. In that manner, Europe and Korea have made the right decisions. During the Spring Split there were no inconsequential games, all games demanded the best possible performance. Furthermore, the double round robin tested the teams of  consistency and adaption in the long run.

The playoff brackets of both systems differ from each other. In the West you will find the traditional tournament tree with quarter finals, semi finals and a final, whereas in Korea a gauntlet system is used. We know, that in the LCK, a team can play up to 42 games, which makes a difference of 24 games, compared to the LCS, so it has to be more rewarding for the Koreans. In the LCS you get placed depending on which position you ended the regular season: Third vs sixth, fourth vs fifth and the top two secure a spot in the semi finals. If now, the Korean team performs consistently over double the amount of games and reaches the top rank in the ladder, it will lock in a spot in the finals.  Sorted in descending order by the placement, teams will get a spot in the following rounds of the gauntlet. Overall both systems are subject to rational decisions and make perfect sense. A counterexample to that is China’s LPL, where there are even more games but the placements resemble the Western pattern of placing into playoffs.

Still the one thing China does better is the implementation of double elimination, which means, that a team has to lose twice to be eliminated. Even the league leader has to fight through three Bo5s to win the title, despite the extremely long season. The result will be, that with a very high chance, the truly best Chinese team will come out victorious. The likelihood of two upsets is too low for a worse team to actually have a chance to claim the throne. UOL managed to beat SK Gaming in a game 5, which should not have been a victory for the and advanced into the EU LCS finals. SK had a dominating regular season a single lost series was enough to pop the dreams of participating at MSI.

The biggest difference lies in the total number of games, which eventually explains and legitimates the rest of the respective format. The LCS-format is to provide uniform broadcasts, but takes away the important point of adaptation for the teams, because the regular season only consists of Bo1s. From the players’ or coaches‘ point of view, the Korean system would be preferred, though the gauntlet is vulnerable to upsets. From the viewer’s‘ point of view, or even third party organisations‘, the LCS-format is probably better suited and provides more professionalism, due to the  regularity of the broadcast. Still, on the big stage, the integrity of competition should get the bigger slice of the cake.