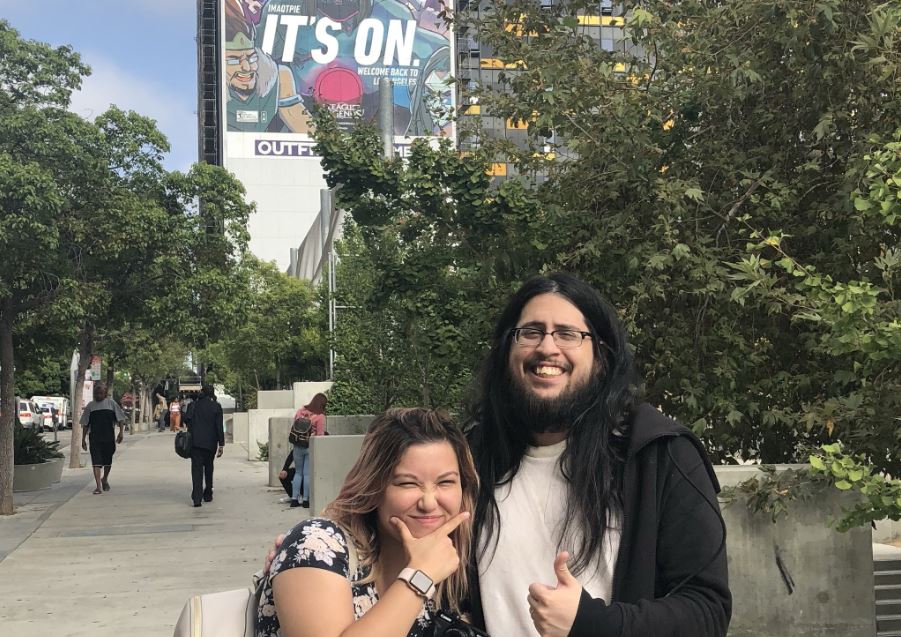 Riot Games is taking big steps towards improving how it interacts with League of Legends fans. The developer released anime-style videos over the past couple of months dedicated to actual players, and it also created the League Partner Program to boost up video content creators. Last month in Oakland, California, the project continued with a streamer showmatch at the NA LCS finals featuring the most popular League streamers in the community.

Riot’s ode to fans is well under way. And it all started with one massive, bearded project in September—the hand-painted mural of beloved streamer Michael “Imaqtpie” Santana on the side of a very large building in Los Angeles.

This painting was meant as one big “Welcome home” to Imaqtpie when Riot learned he was planning to return to the city. He lived in LA throughout the start of his League career, but moved away to become a full-time streamer. He returned right around the start of the 2018 Summer Split. By then, Riot had already reached out to Allie Jean, the mural’s artist, and the project was under construction. A love letter to QT and the community, the mural was designed to be a big kickstart to Riot’s new community-first initiative, Riot art director Chesney “JustMoose” Lattuga told Dot Esports

“We came into this year really wanting to work with the people in our community who made the game great,” Lattuga said. “We wanted to focus less on the game itself, and instead on all the creators, such as streamers and artists like Allie.”

They succeeded. The community’s response to the mural was overwhelmingly positive, even without any marketing or public announcement from Riot. Within hours of Jean sharing images of the building and mural on Twitter, they reached the top of the game’s Reddit community. Shortly after that QT shared it on Twitter, too, posing next to Jean, who has been Imaqtpie’s YouTube channel artist for about two years.

When the project was first devised, Lattuga wasn’t sure what exactly she wanted to do, but it didn’t take her long to figure it out.

“I remembered watching QT’s YouTube channel and seeing all his thumbnails, and I immediately found Allie through that,” she said. “She had created this online, recognizable illustrated persona of QT. And when everyone sees those illustrations, they think, ‘Oh, that’s QT.’”

Through her discussions with Jean, Lattuga decided a mural would be the perfect way to dedicate QT’s return home. When she initially reached out to Jean, the artist wasn’t sure what to expect. She certainly wasn’t ready for the shock that followed.

“When Chesney first messaged me, I don’t think I realized the scope of the project,” she said. “I was like ‘Cool, I’ll make a Hallmark card for QT, why not?’ And then she told me that no, it’s actually going to be on the side of a building, and the building’s going to be 10 stories tall. It turned out much better than a Hallmark card, that’s for sure.”

Jean started her career creating digital artwork while in art school, but even after almost two years with Imaqtpie, she never considered something quite on this scale.

The idea to create the online persona of the bearded D1 legend came from Jean’s boyfriend, Eugene. He’s more popularly known as 2ndSequence—QT’s video editor. While Jean was still in college, 2ndSequence looked through some of the doodles she shared in a Discord channel, and thought she’d be perfect to create this new Imaqtpie illustration. The idea was to help QT’s channel pop out and stay unique in the sea of League YouTubers who simply use artwork from the game.

To her, seeing something that had only previously lived in little thumbnails for online videos blown up and thrust into the real world was surreal enough. But it meant so much more to her because it validated her dreams to her family.

“I have an Asian mom, and she didn’t necessarily want me to go and become an artist, even if she did believe I was really talented,” Jean said. “Even if it started as an image on my computer screen, it was now on a massive wall, or something she knew was actually a big deal. Having that ‘Your daughter is a successful artist!’ moment… What that meant to my mom almost mattered more to me than just seeing it up there.”

That doesn’t mean she still wasn’t moved by seeing it in person, though. In fact, Jean says she was brought to tears when she saw it for the first time, and it caused her to almost crash her car.

“To have a League player drive by and say, “Oh my god, that’s Sion!” is what’s so special about this,” Lattuga said. “Even if it’s not specifically about those players per se, it feels almost like an open letter to every single person who’s played the game. It says, ‘Hey, we see you. We thank you. This is for you.’”