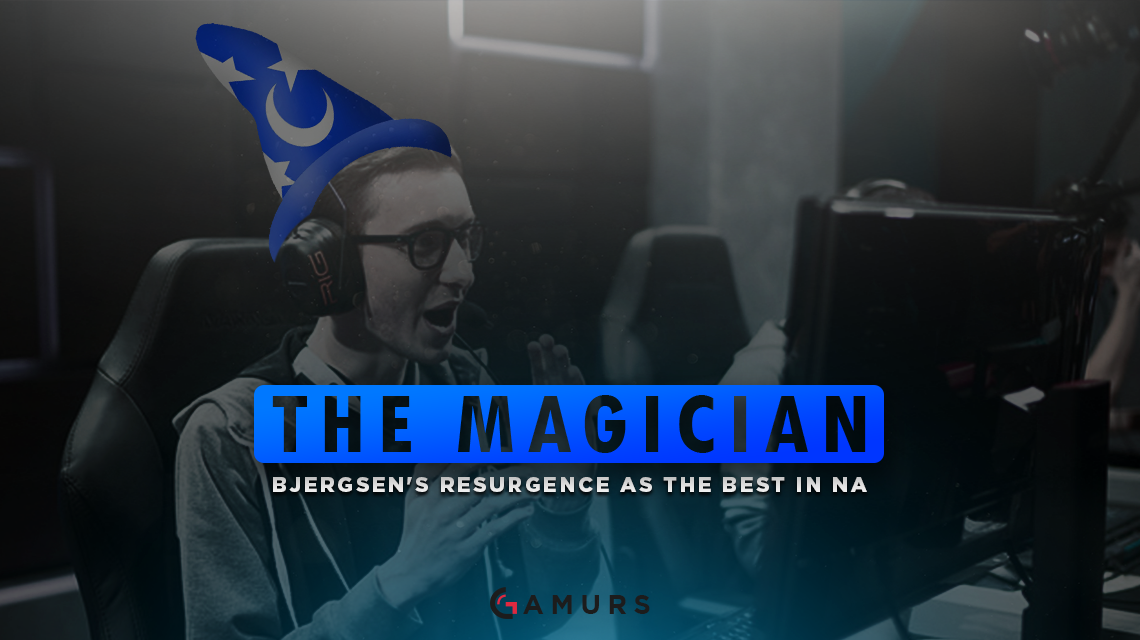 It’s no secret that Søren “Bjergsen” Bjerg is not only the prize jewel of Team Solomid and owner Andy “Reginald” Dinh; he carries the hopes and dreams of North America regularly, as TSM often represents the region at international tournaments. Spring of 2016 showcased a more quiet Bjergsen, as Cloud 9’s Jensen, Immortal’s Pobelter, and Echo Fox’s Froggen all stepped up to the plate. One could argue that Bjergsen was no longer the top midlaner in the region. In fact, Bjergsen only earned Third Team All-NA LCS honors, as Jensen and Pobelter took the top two spots. However, with TSM’s resurgence as the best team in North America, nobody shines brighter than the Dane.

The entire team must share the blame for Solomid’s mediocre Spring Split, though Bjergsen’s impact was still positive. At 10 minutes, Bjergsen was on average 8.6 CS ahead of his opponent while amassing a reasonable 117 gold lead. Effectively, Bjergsen’s entire gold lead was through his own performance in lane. Despite Bjergsen’s laning, TSM routinely found itself at a disadvantage in gold, and averaged a gold deficit at 15 minutes. Solomid gained a reputation for neglecting Dragon during Season 5, and while Dinh replaced four players, the new TSM still struggled to control the objective throughout the first half of Season 6. Spring Split TSM took Dragon first in only half its games.

But this is not Spring Split TSM. Through a full third of the Summer Split, TSM managed to control first Dragon in every game but one; all the while, their new, objective-focused style continues to go unpunished. TSM manages to take three towers before their opponent 79% of the time, which is an important metric because generally after three towers, the entire map is open for additional pressure. Though the shotcaller of TSM is not public knowledge, Bjergsen and Doublelift generally stood out as the main voices last split alongside YellOwStaR, so suggesting that the pair improved as a shotcalling duo is no stretch after YellOwStaR’s departure. Given the added importance of early Dragons with the midseason change, TSM’s improvement came at the right time. The team has looked decisive and quick – important qualities in competitive League of Legends.

While TSM continues to improve, Bjergsen exerts even more dominance against opponents. This split, he averages a slightly lower lead of 7.9 CS at 10 minutes, but he boasts a far larger 307 gold lead over his lane opponents. TSM’s newfound decisiveness has given Bjergsen the freedom to dominate again, and it made the difference. From a meager 11% in the Spring Split, Bjergsen now sports a First Blood rate of 43%. This does not suggest that Bjergsen solokills his opponent more, as nowadays solokills are a rare sight. Midlaners are taught to play safe and earn their lead through out-pressuring the opponent. However, the First Blood statistic instead suggests that Bjergsen and Solomid act as a unit more often, either culminating in the team fighting in a group together near Dragon or botlane, or Bjergsen receiving attention from Svenskeren and Biofrost in the midlane.

Both Hauntzer and Doublelift have given up a slight amount of their CS post-15 minutes, leading to an additional source of income for Bjergsen. His CS%P15 jumped from 25.8% in the Spring Split to 29.5% now, allowing him to output more damage and stay further ahead of his opposing number. His entire Summer Split Champion pool consists of mages; though many suspect that Bjergsen’s Champion pool is bottomless, he still surprised many when he showcased his ridiculous Ryze and Vladimir skills. Neither are champions he played in either Season 5 or 6, so Bjergsen’s ability to adapt is, of course, unquestionably still strong.

It is notable that Bjergsen’s damage has increased even with Corki out of the metagame. Corki was one of Bjergsen’s most-picked Champions, and the Yordle inflated numbers of all midlaners during the Spring Split due to his ridiculous poke and burst, but Bjergsen still manages to output more damage than before with insane averages on Azir (732 DPM), Viktor (880 DPM), and Vladimir (883 DPM). His Ryze and Zilean are no slouches either; we’ve seen some incredible outplays from the former, while the latter still manages 505 DPM and frees up a carry spot for Hauntzer, should TSM fancy an Irelia. Bjergsen’s resurgence stems not from a mechanical improvement on his part – I would argue that he was still the top player last spring, but was unable to showcase his talent due to TSM’s general lack of coordination. Of course, shotcalling did not fall solely on YellOwStaR, so Bjergsen must take some of the blame, but whatever coaches Parth Naidu and Weldon Green have done to improve TSM’s coordination must be commended. By almost all measures, TSM went from one of the most incredibly average teams in the NA LCS to the team topping nearly every statistic. Solomid’s drastically better shotcalling – through quickness and decisiveness – and increased focus on objectives have allowed Bjergsen to dominate.

Now the Magician is unshackled, and he’s out for blood.

All stats come from Oracle’s Elixir .