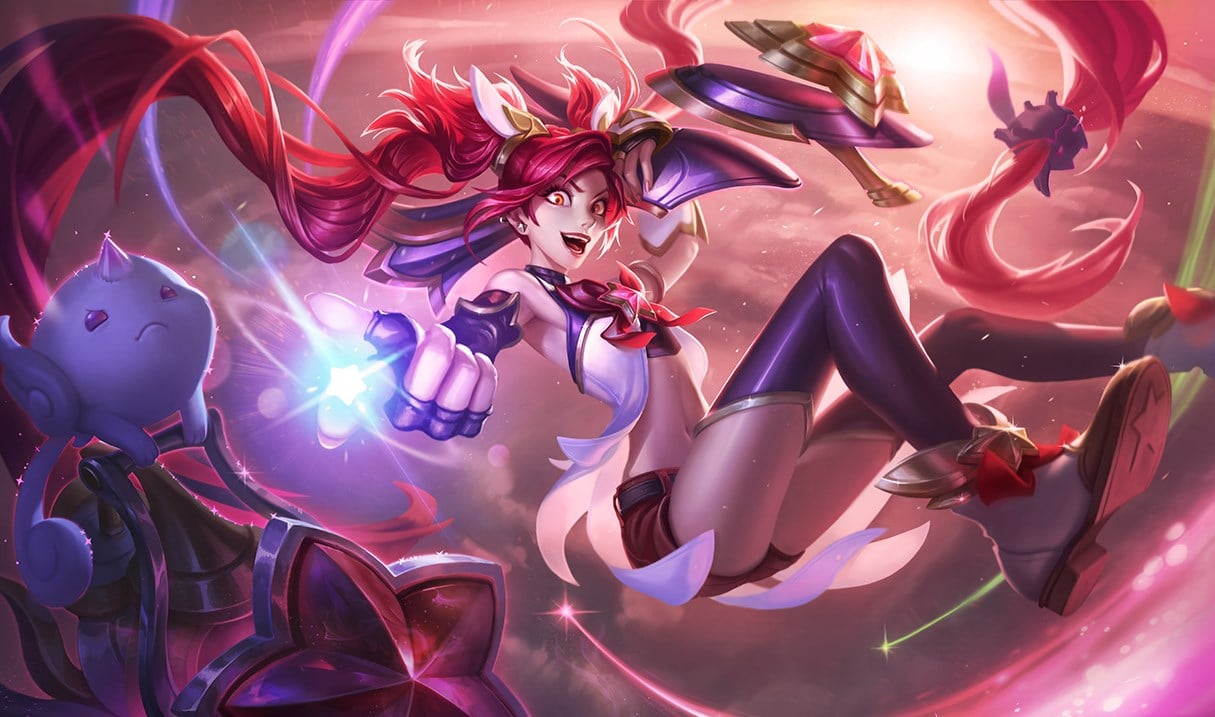 League of Legends regularly releases new skins for champions to explore new themes, effects, and even lore to give champion mains a new toy and collectors a rush of adrenaline as one more skin joins their highly-priced collection. Although the devs try to avoid favoritism, there are, still, champions that enjoy a better treatment with more frequent skin releases (including Epic, Legendary, and even Prestige Edition skins), better skin polishing after reveals, and even more detailed skin lore. Some of Riot’s pets are, to name a few, Ahri, Lux, Ezreal, and Miss Fortune with more than a dozen skins currently available.

Jinx, unlike Ahri, Lux, Ezreal, and Miss Fortune, belongs to the golden middle with 11 skins. Although there are classics like Mafia Jinx and Ambitious Elf Jinx, the top five spots are reserved for effects-rich skins that not only tell a compelling story but also enrich Jinx’s character fantasy of Loose Cannon. These skins also play a huge role in champion animation flow, and therefore, can easily affect your gameplay by relieving the mechanically-intense process of CSing or even attack-moving.

Here are some of the best skins for Jinx in League of Legends that complement Jinx’s fantasy and take her gameplay to the next level with cleaned-up animations, rich particles, and crisp sound effects that make playing AD carry worthwhile.

The top five Jinx skins in League of Legends

As part of the Heartseeker theme during the 2020 Valentine’s Day event, Heartseeker Jinx is incredibly detailed with a complete recolor of her character and weapon models. The skin’s theme paired with a clear, bright, and playful color palette makes this skin simply adorable and necessary to have in your collection if you love playing Jinx.

Since Heartseeker Jinx is a legacy skin released to celebrate Valentine’s Day event and love as a whole, this skin is currently unavailable in the shop. Still, you can get this skin from My Shop, or you can wait until next Valentine’s Day to pick up both skin and chromas.

Released as a Prestige Edition skin for the Anima Squad event earlier this year, Prestige Battle Cat Jinx is a must-have skin for die-hard Jinx mains and collectors that have to collect every Prestige Edition skin available in League. Prestige Battle Cat Jinx is absolutely stunning skin, from its splash art and brush movement to completely new particles, animations, and textures that give Jinx a fresh look and a smoother feel.

With the global premiere of rewarded TV show Arcane on Nov. 21, 2021, Riot released the Arcane skin line that commemorates the origins of the main characters. The champions lucky enough to see their Arcane version were Jinx, Vi, Jayce, and Ekko. Although these skins are simple base skin recolors, they leave an impression of a visual update that polished champion animations, and refined effect particles. Arcane Jinx easily stands out in the bunch since the skin only adds value to her already incredible lore.

Arcane Jinx, together with other Arcane skins, was a free skin during the Arcane event in League. But, lucky for you, these skins are still available for purchase in the shop.

Introduced during the celebration of the Chinese New Year back in 2015, Firecracker Jinx is one of the best bangs for your buck. Imbued with golden fireworks effects, every auto-attack with Firecracker Jinx feels as if shredding the enemy frontline with ease. On top of that, Jinx’s ultimate, Super Mega Death Rocket! explodes with a satisfying big firework that can never disappoint you.

The detail that has gone into crafting this skin is impressive, and in turn, has given the champion the best-looking weapons from any of her available skins. In 2015, chroma options were introduced for this skin that offers players the ability to purchase a variety of alternative colors.

Although seasonal skin, Firecracker Jinx is always available for purchase for 1,350 RP.

The best skin available for Jinx currently is Star Guardian Jinx. Part of the popular Star Guardian skin line, this look provides a cosmic aesthetic for the champion complete with two floating companions that transform into her weapons. As you would expect, this skin comes with a whole range of unique features and animations to give it its unique feel and appearance. Introduced into the game in 2016, this skin sports a price tag of 1,820 RP. But for the cost, it delivers the most in-depth redesign for the champion of any of her skins.

Final verdict: If you’re planning on investing your money into a Jinx skin, your best option would be Star Guardian Jinx since it’s an incredibly rich skin packed with new voice lines, effect particles, and animations.