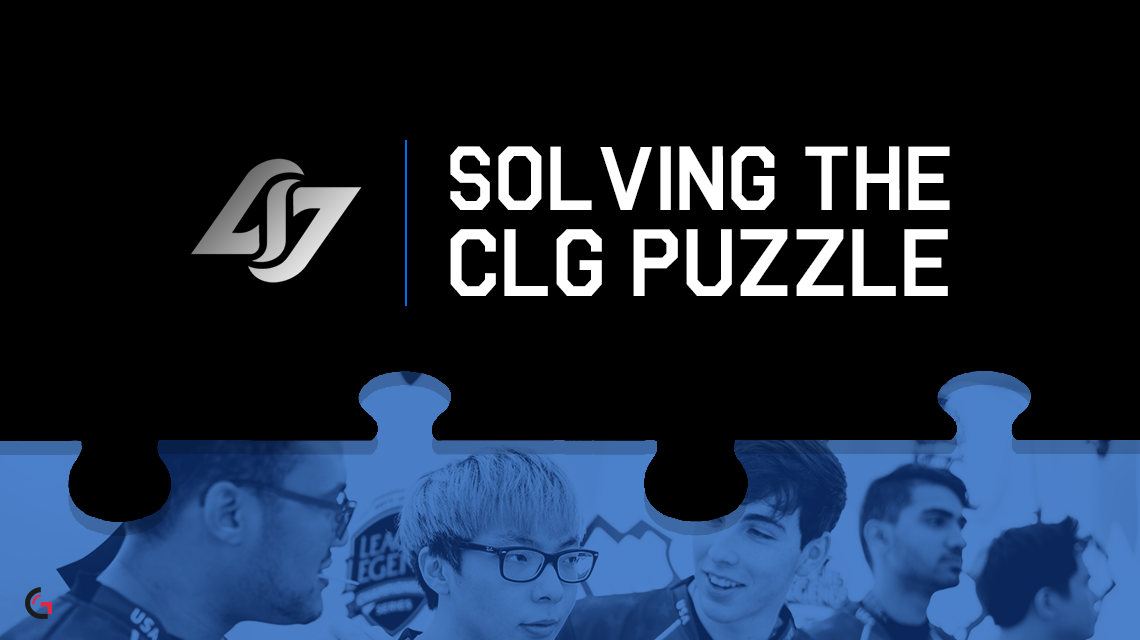 This article is the third of six that will be highlighting every North American League Championship Series team that made the playoffs, starting with the six-seed and going up. The current squad: Counter Logic Gaming. Before we dive in, let’s look at the roster:

Look familiar? That would be because this team kept the exact same roster that won the NA LCS last split and finished No. 2 at the 2016 Mid-Season Invitational after defeating the likes of Royal Never Give Up, G2 Esports, and Flash Wolves.

With by far the best showing in history from a North American team at an international event, CLG looked to return to the NA LCS and dominate the competition. Well, things didn’t exactly go as planned. The Spring Split champions and MSI runners-up failed to adapt to the new meta and spent the first four weeks of the split playing catch-up, going 3-5 during this time period. While not a terrible start by any means, a squad of this calibre theoretically could have gone 6-0 or 5-1 without any major problems. They did not, though, and that is just how the game works. Taking a break or failing to adapt can cause even the best teams to look like they do not belong on the big stage; just ask G2 Esports.

Was failure to quickly adapt to the new meta CLG’s only problem, or was there more to it? Obviously, the answer to that question is that there was more to it. Nothing is ever as simple as a yes or no answer, especially when it comes to professional League of Legends and team dynamics.

At the beginning of the split, the main issue was a lack of adaptation. Members of the team even cited this as a huge problem. They were unable to clearly identify the meta before the split began and once they figured it out, it was a little late. Still, eventually they did adapt as a team and things got better. Remember though, it is never that simple.

It was ridiculously hard for CLG to adapt to this new meta for one particular reason: it does not play to their strengths. In fact, it plays to their weakest link. More than ever, League of Legends is a team game. That is not a problem for CLG, as their teamwork and coordination pushed them to all of their accomplishments last split against opponents that had individually better players. Last split, however, was the split of the ADC. A good duo lane could absolutely carry the game if the rest of the team protected the ADC and kept it alive in team fights. Stixxay was the driving force behind the team’s final teamfight win over Team SoloMid to take the Spring Split title, and was praised during MSI as a “godlike” ADC. This split, the meta shifted.

Solo laners, specifically mid laners for the most part, are leading their teams to victory in unison with their junglers, while the duo lane has been pushed back into a utility role and the top lane meta is quite frankly a little up in the air.

It seems, similarly to teams like Team EnVyUs, Immortals, and TSM, that CLG does not care about the meta. Stixxay is still the main source of kills on the team and gets the most gold, though Huhi is the main source of damage and has the worst gold and Creep Score (CS) differential, Darshan has the most deaths, Xmithie has the best KDA, and Aphromoo is Aphromoo (still a god).

This may be the strangest team going into playoffs. Everyone knows their potential, and they do too, but the way CLG plays in this meta is not meta, but it also still works a good portion of the time. Really it does not make a whole lot of sense, but that is kind of just how good this CLG team is as a whole. The meta is in favor of mid laners? Huhi is going to not get very much farm or gold, but still output a ton of damage and Stixxay is still going to play champions like Lucian and Caitlyn, though not particularly effectively.

Looking at this team’s stats, it is a wonder that they made the playoffs. Nothing makes sense. Position by position, take a look.

Darshan, in comparison to other top laners, has some interesting stats. While Darshan has the most deaths on the team, he is only in the middle of the pack for deaths among top laners and has the third-most kills, which is odd considering his kill participation is the lowest in the league. When it comes to his high share in his team’s deaths, Darshan actually has one of the lowest percentages in that category for all top laners. Though he has the lowest average CS per minute, Darshan has one of the highest positive CS and gold differentials on his team and among top laners. Despite the positive gold differential, he has one of the lowest average gold per minute stats of all top laners.

See, I told you nothing makes sense.

Why? He split pushes. A lot. It is what Darshan is known for at this point. CLG is playing some of the same strategies they used last split, and they obviously are not working quite as well. After all this time, other teams figured it out. Darshan is getting punished in his aggressive pushes, and it leaves his team out to dry.

Xmithie is the team’s very average rock, and I mean that in the most flattering way possible. This squad would probably fall apart if they did not have him this split. Practically all of Xmithie’s stats are very average among junglers, but a couple stick out: assists and average wards placed per minute.

Xmithie is really good at protecting his team and setting them up for kills. His wards create perfect vision for everyone to keep an eye out for enemy ganks, constantly know where the enemy players are, find out where plays can be made, etc. Xmithie’s Gragas is something impressive to watch. By far his best champion, Gragas and Xmithie together is a perfect pairing. Yet, his stats remain just above average. Nothing too special or crazy, but enough above average that his impact in the game is enormously important. This is pretty much the story for all of Xmithie’s champions (aside from his Nidalee, but we do not talk about that). Above the average and a constant performer, Xmithie is the key to CLG’s success.

Remember how this meta rotates around mid laners? Huhi is here to make that confusing, along with the rest of his team. Behind in gold and CS early-game, Huhi manages to stay on track and perform pretty well as the game progresses. He almost always ends up dealing the most damage on his team, and ends the game with more kills, gold, and farm than anyone aside from Stixxay. So, behind early-game? Not a problem for Huhi and the crew.

Last split’s rookie sensation ADC, Stixxay has been underwhelming in the Summer Split. And yet, and I cannot stress this enough, in a meta unfit for the ADC, he has stayed a primary part of this team and even played carry champions with success. Stixxay’s KDA is not impressive to look at and he actually dies more than any other ADC in the league, so how can this be considered successful? Damage output. Surprisingly enough, that is Stixxay’s saving grace. He outputs more damage per minute than any other ADC in the league, aside from Jason “WildTurtle” Tran, and we all know how aggressive WildTurtle is.

When it comes to Aphromoo, nothing really needs to be said. The guy is as solid as ever, but being a playmaking support is hard when the meta is not in favor of the duo lane. This leads to some lackluster performances. But, he does his job and he does it well for the most part. Roaming, setting up vision, protecting his teammates, etc. whenever needed.

Alright, so it all makes a little more sense now once it is all together and easy to look at. CLG wins by, as usual and exactly how they did it last split and at MSI, working as a team. No one player has crazy good stats or really stands out as the player dominating the rift when CLG wins.

Watching CLG play is a constant reminder of how important team synergy is, and how much it can change a team’s macro play and affect their chances of winning a game. Most people look at CLG and will say Aphromoo, Stixxay and/or Darshan are the superstars leading this team to victory, but it simply is not true. If anything, the player holding this team together for each win is Xmithie, but that is not entirely true either. More than any other team in the league, CLG is a unit. If one member of this team falters, they all do. This is the strength of CLG, but it is also their biggest weakness.

CLG has a very realistic shot at auto-qualifying for Worlds during the NA LCS Playoffs. There is no surefire way to lay this out, but basically if they can beat Liquid in the first round, their chances are very good. Not 100% auto-qualification, but very good chances. If they go on to then win their semifinal, they are guaranteed qualification.

The last couple of weeks, CLG has almost reverted to their early-season form. So basically, they have not looked all that great. They have simply looked disjointed at times. If CLG wants to qualify for Worlds during the playoffs, this squad will have to step its game up.

Will CLG qualify for Worlds during the playoffs? Will they even make it past Liquid in the first round? Let us know by commenting below or tweeting us @GAMURScom.