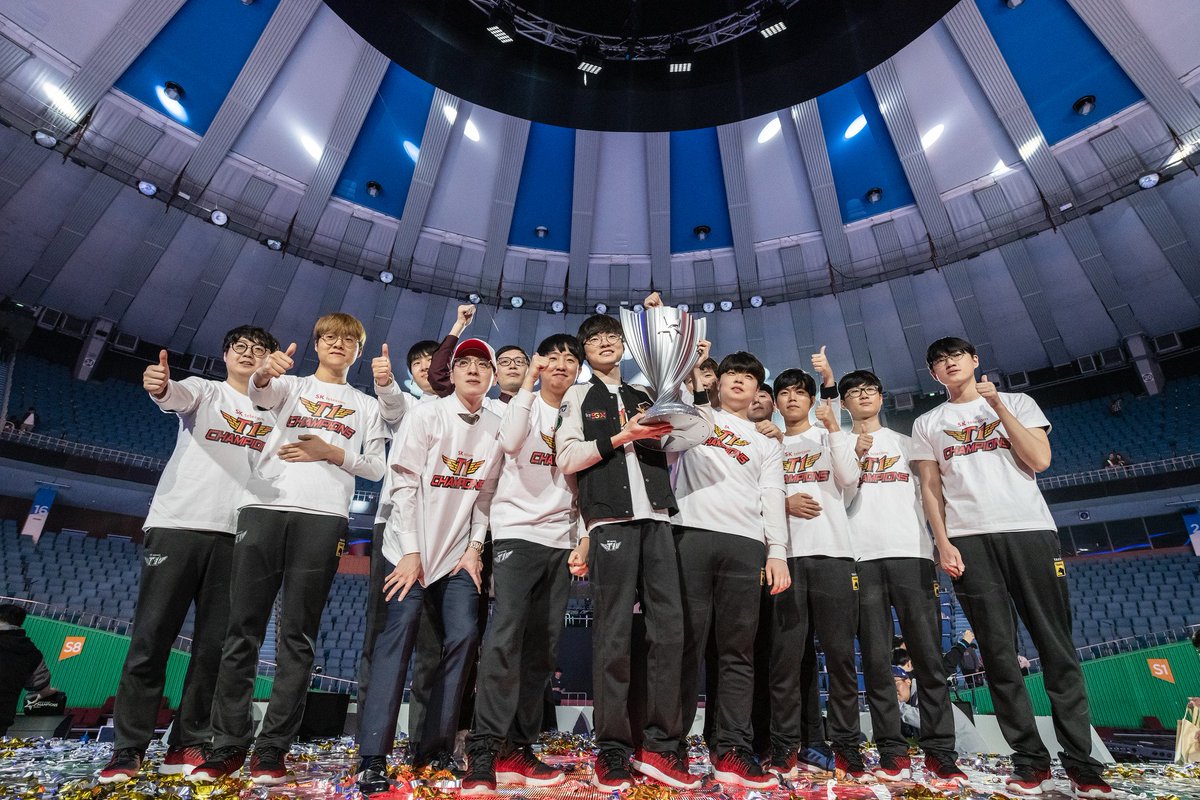 SK Telecom T1 is the most successful organization in League of Legends and home to the game’s best player, Lee “Faker” Sang-hyeok. With multiple World Championships, an MSI win, Rift Rivals, and plenty of LCK trophies, SKT have won almost everything they can in League.

But all of that didn’t happen without a rough patch. Last year was the lowest point in SKT’s esteemed history after failing to qualify for any international events. Then, to start off the 2019 LCK Summer Split, they were as low as ninth in the standings with a 1-5 record.

Now, however, they’ve dug themselves out of that hole thanks to the grit of one of the most dedicated players in history combined with a bunch of hungry rookies looking to prove themselves to the world, not just Korea. The SKT we knew is gone, replaced by the best roster assembled under the illustrious SKT banner in history. And the world has to watch out.

Faker and his legion

Faker has been the shining light for SKT during his six years with the organization. In 2018, when SKT didn’t make a single international tournament, Faker was the one playing his heart out. With no support on the Rift and fans pondering the end of his reign as the god of League, 2019 was a make-or-break year.

And so far, Faker has made this year his. With a completely revitalized SKT, Faker and his legion marched into the new era of the LCK—an LCK battered by a poor year in 2018 internationally. The region was looking for revenge and its longtime leader was nowhere to be seen. Faker and Korea had a lot to prove and the superstar mid laner launched himself back to the top.

SKT claimed the Spring Split title over Griffin, who dominated the regular season. They were knocked out of MSI in a five-game thriller against eventual champions G2 Esports. They claimed the first Rift Rivals trophy for Korea. While they were struggling domestically at the start of the summer, SKT were taking names internationally.

Faker was playing exceptionally well over this time, exemplified by his teleport flank against Invictus Gaming at Rift Rivals, setting up a lane kingdom against his opponents in the LCK, and playing like the Faker that rose to fame in 2013. Faker is SKT and SKT has been Faker for a long time. But the tides are changing.

SKT isn’t all about Faker. In fact, Faker is the leader of this team in transition. Support Lee “Effort” Sang-ho has only just started getting his first stint of stage time over the last two weeks. Down bot with Park “Teddy” Jin-seong, the young duo is toppling some of the most experienced bot lanes in League.

Teddy was always a prodigy on Jin Air and Ever8, but he never had the team to support him on his way to the top. Effort has been a longtime trainee of SKT, but was always one step behind the more experienced supports like Cho “Mata’ Se-hyeong and Lee “Wolf” Jae-wan. Now thrust into the spotlight on a roster like SKT, both have taken it in stride.

Wonder kid Kim “Clid” Tae-min, in his first year in the LCK, has taken the world by storm in the jungle. His Lee Sin is unparalleled to anyone else in the LCK and his aggressive playstyle perfectly matches Faker and Kim “Khan” Dong-ha. Like a gang on a school bus, Clid roams around the map, beating one player down to the ground again-and-again, sending the enemies spiraling out of control.

SKT are no longer an old guard of Korean League. They’re as much of a pioneering squad as Griffin, Damwon, and Sandbox. The name will linger on fans’ tongues with plenty of prestige attached to it, but the next generation of Korean superstars are under the trusty wings of Kim “kkOma” Jeong-gyun and Faker.

SKT’s rough start to the split was uncharacteristic. Going 1-5 wasn’t ever in the plan, but things look like they’re panning out how they expected them to now. While they’ve had a pretty easy run over the last few weeks, facing off against KT Rolster twice, Gen.G, Hanwha Life, and Jin Air, SKT have the wind in their sails.

They’ve strengthened up some of their drafts, taking some innovation from their international competitors. Khan is on form right now and the pieces have started to fall into place against some of the weaker teams in Korea.

The true test for this new roster will come over the next few weeks. If SKT want to contest Worlds again, and right their MSI wrongs, they need to come back against the best teams in the league. It’s not out of the equation that they miss out, but it’s unlikely. SKT are on an upswing, and over the final four weeks of the LCK, the region’s young guns must watch out.