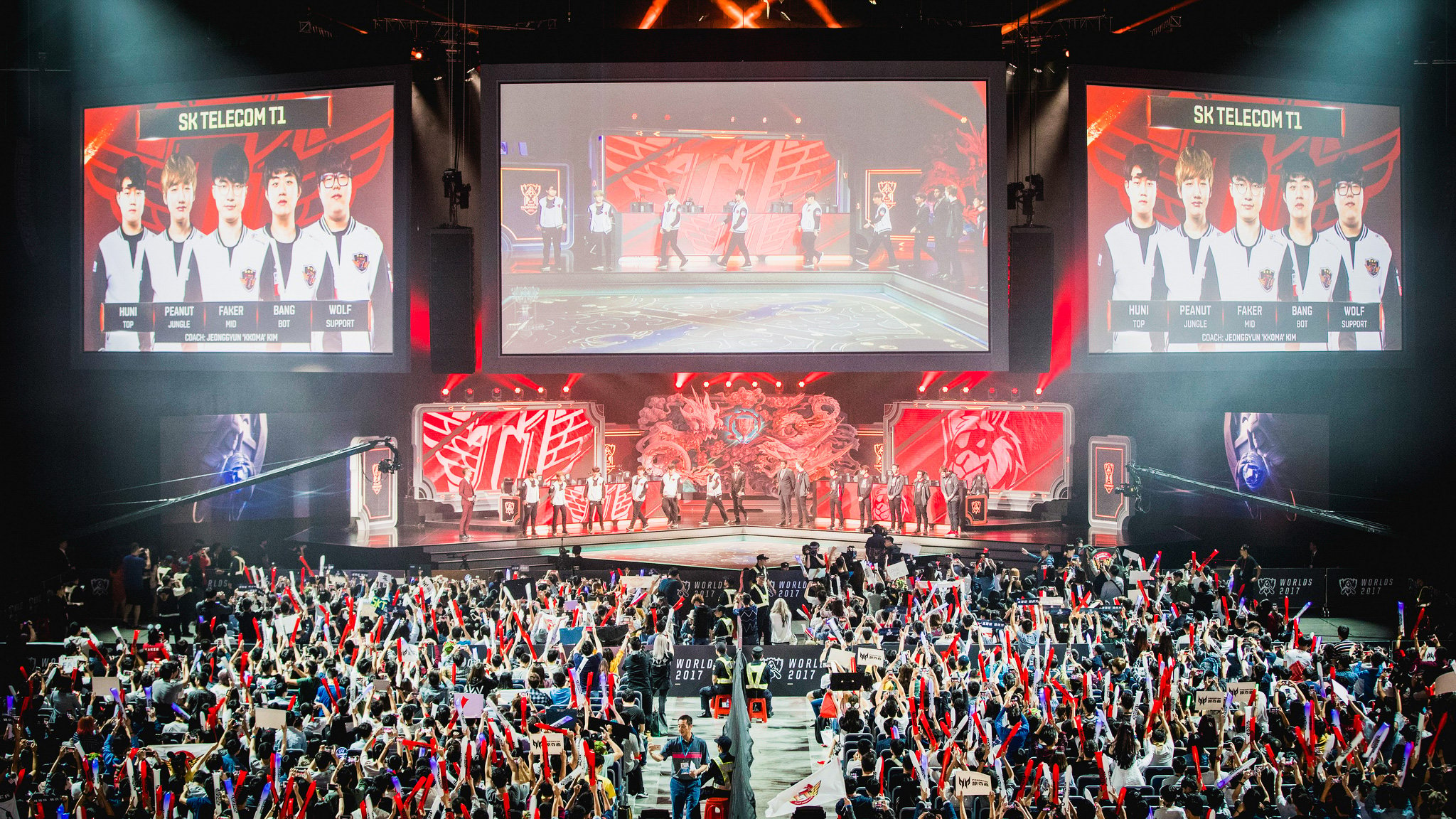 The League of Legends World Championship is always a crazy tournament. But the ending is nearly always the same: SK Telecom T1 win the Summoner’s Cup.

Not only have they never lost a best-of-five series at Worlds, the only teams that have even seen a fifth game have been fellow LCK squads. Because of that, when they were matched against Misfits Gaming of the EU LCS in Friday’s quarterfinals, many predicted the series would be a clean sweep. All three desk analysts had SKT 3-0.

Misfits were having the tournament of their lives, having improved more over the past month than any other team. And facing the behemoths, they didn’t blink. More than that—they struck back and put the champions on the ropes.

It took a historic comeback by the champs to survive this series, the best one at Worlds so far.

The first game was a total stomp by SKT. Using star mid laner Lee “Faker” Sang-hyeok’s pressure in the mid lane, they obliterated Misfits. Faker established mid priority and then punished a greedy back from Nubar “Maxlore” Sarafian, who failed to help Barney “Alphari” Morris bounce the wave. That meant a dead Rumble and a kill for SKT’s mid laner. Misfits’ nerves were showing at the worst possible moment.

The game just wasn’t fair from there on out. Outside of a single kill handed over, it was a perfect game from the Korean side. It looked like the same old SKT from past years who would turn on the jets after the group stage and romp through the rest of the tournament. As for Misfits, there were serious questions whether they’d tilt after seeing power like this:

For a second, it looked like they did tilt in the game two draft. Lee “IgNar” Dong-gyeun locked in Blitzcrank—a wonky pick in the LCS. But it wasn’t tilt. In the most important game of their lives, Misfits stayed true to their strategy: Draft for early game and try to win in the bot lane. They succeeded to a shocking degree.

SKT got First Blood on a botched bot lane dive by Misfits, but that didn’t deter the Europeans. They went back to the bot lane and got Stephen “Hans Sama” Liv rolling on Tristana. He eventually became a monster, bursting down any member of SKT IgNar landed a hook on.

IgNar’s initiations were on-point and Misfits evened the series.

Now it gets interesting

Having evened the series, SKT banned the Blitzcrank in game three. But that wasn’t really the problem—the issue was SKT’s bot lane, who have been underperforming for months now. To press that advantage, IgNar turned to another engage supprt: Leona.

Blitzcrank is on the edge of the meta, but at least he had some run in the LCS regular season. Leona though was a total wild card. This bot lane could have gone very bad for Misfits. But then SKT handed it right over with a late Vayne pick. Vayne into a boatload of CC, including Ivern and Jarvan IV, was a scary proposition.

Yeah, that didn’t work. Bang’s Vayne was damn near useless as Misfits rolled. IgNar, taking Fervor of Battle, dealt serious damage, and Misfits’ innovation of sending Maxlore to the bot lane had SKT flummoxed. Only heroic games from Faker and top laner Heo “Huni” Seung-hoon kept it even a bit close, but a Misfits Baron steal sealed the game.

For the first time ever, a Western team put SKT on match point on Worlds. Misfits had done what so many others failed to do. All they needed was one more win to close out and it would have been the greatest upset in the history of League esports.

But it wouldn’t happen in game four. Faker wouldn’t let it happen. Taking Ryze, a pick that has been much maligned at Worlds, he dominated. But as a team, Misfits were still ahead. They continued to win bot lane and had SKT support Lee “Wolf” Jae-wan digging deep into his support pool, ultimately taking Braum. We hadn’t seen tank vs. tank supports for a long time. How good would Wolf be?

Turns out, he was pretty good. SKT managed to stay alive despite giving up a first Baron. Defending at the inhib, Wolf managed to stop damage from Sivir while Huni lived just long enough for SKT to turn it.

That one clip was the story of the rest of the game. Misfits would engage onto Huni, he’d live with Trundle ult, and SKT would clean up the fight. Hans Sama, who’s been so excellent, couldn’t find his way into fights while Bang and Faker constantly dealt damage. Against tremendous odds, SKT evened the series.

Game five. This is a place SKT have become increasingly familiar with over the years, going to five games in both the semifinals and finals of last year’s tournament. But those series were against fellow Korean teams. This was uncharted territory for SKT.

Playing a teamfight comp against SKT’s split push, Misfits really took control of the map by grouping together. Their vision control can be lacking, but not in this game. Three infernals went their way by virtue of the map control. All the had to do was play patiently and scale.

But things are never so easy, not against Faker. Huni eventually became a split push god on Jayce, getting some damage on the inhibitor turret. The he made mistakes, getting caught by PowerOfEvil a couple times. Misfits had their opportunities to take Baron, but didn’t have the initiative to finish. Eventually, a bad play by Alphari gave SKT top-side vision control, and the Misfits dream started to slip.

Feeling forced, Misfits tried to make something of an Elder Dragon. A triple-infernal Elder could have broken open the game. But these late objective fights are what SKT are so good at. The game was new ground for SKT, but these types of fights are what they live for.

Losing Elder and then dying to a Huni TP was too much. Huni, who’s been much criticized through the year and even in this series, often because of TPs gone awry, made the game-ending move.

It was an anticlimactic ending, but only because this was such an exciting series. Misfits punched the defending champions in the mouth and kept punching. From IgNar’s picks and builds, Alphari’s laning, Maxlore’s pathing, and PowerOfEvil and Hans Sama carrying, this was a complete performance by the EU side—their best of the year. At the conclusion, the crowd in Guangzhou gave them a well-deserved ovation.

Misfits were underestimated at every turn. But in the end, they were one of the most exciting teams at Worlds. They deserved to be here and threw one hell of a series at SKT. Maybe it’s better to be a underdog at this year’s Worlds.

Here’s to Misfits—we’ll remember this one for a long time. SKT are tough, but fighting against history is even harder.