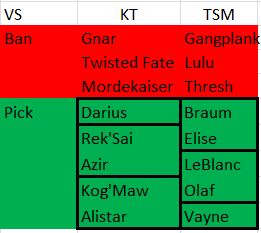 KT seemed to get all of their comfort picks and formed a solid team-fighting comp. Meanwhile TSM’s composition doesn’t really gel together and just seemed to pick to win lanes. Olaf and LeBlanc were picked together, but have distinctly different playstyles. Olaf is better at team fighting than picking an opponent off since he doesn’t have CC or heavy burst. He’s supposed to dive the back line, but no one else on TSM wants to go in. I liked pairing Elise with Olaf though to help his early game and possibly get him snowballing. The Vayne pick was also out of sorts; he wasn’t going to get help from his team since they formed a pick comp (known for only going in, no disengage), so he needed to pick a safe ADC (Corki or Tristana most likely). Alternatively, Sivir would have fit much better, giving the team much needed engage and wave clear. Kog’Maw also greatly outranges Vayne so there wasn’t going to be an opportunity for Vayne to thrive in this game. TSM also saw Darius 1st picked, but picked no champions that would make his life difficult. They had no kiting or zone control to punish the pick. Braum was great to go against Kog, being able to block the majority of his damage, but TSM didn’t have a team-fighting comp to go with it. Both teams likely want to lane swap for easy farming for the hyper carries. TSM’s comp lacked synergy while KT had all comfort picks.

This game was dictated by repeated careless errors by TSM. The game was rife with TSM members (mostly Lustboy, Dyrus, and WildTurtle) consistently being out of position and caught out by the enemy team. For drafting a pick comp, TSM played it backwards. I liked how TSM started the game and TSM actually had the lead early. TSM pushed the first tower faster which allowed Dyrus to get farm bot lane and WildTurtle to freeze top lane. Despite Dyrus giving up first blood, TSM was still ahead and pulling advantages in xp and farm across the map. Things started going south for TSM at around the 17 minute mark when TSM was going to take their 2nd dragon. TSM was hiding in bush but standing on a ward when Bjergsen went in to harass. No cost to the play until afterwards when TSM was scattering after Bjergsen went in – TSM left the bush in all different directions, but Santorin was slow to react and got caught out and netted KT 2 towers mid lane. After this, TSM vision control really suffered; most of the wards were defensive in their own jungle and never crossed into KT territory. TSM never gained vision control over baron or dragon afterwards even when they had the opportunity, then got caught out and died giving away objectives for free. The climax of the game occurred at ~28 minutes when TSM forced baron after KT ganked Dyrus bot lane. While normally a strong cross-map counter-play, KT responded well with Rek’Sai ult + Darius TP to contest. TSM stayed on baron despite this and misplayed the fight after getting engaged on. KT engaged from multiple angles; TSM should’ve backed off baron and engaged onto a target before KT grouped, but TSM’s comp also lacked engage. TSM made numerous errors and repeatedly got caught out, forcing them to give up objectives and gave KT a lead with the better late game comp. I would place most of the blame on Lustboy for getting caught out the most and his poor use of Braum ult in team fights; using ult to disengage Rek’Sai rather than the carries. Santorin and Lustboy really slacked off mid game for vision control and didn’t help Dyrus get back into the game. 24 minutes in Dyrus finally completed Black Cleaver with a Giant’s belt when Darius had 2 items completed by 21 minutes. At least ward for Dyrus so he isn’t spending his already few resources on wards for himself. TSM never got a split push game going. Bjergsen had a massive advantage mid (+50 CS, 2 level advantage), but was unable to take mid turret. Perhaps sending him to a side lane mid game to split push could’ve garnered TSM more advantages. This game was plagued with TSM errors that could’ve easily been prevented. They seemed to lack focus and made careless plays that KT took advantage of.

The gold distribution was fairly even spread for both teams. The damage discrepancies highlight the problems with TSM. Bjergsen did almost half the team’s damage, but I think this was due to TSM’s poor drafting. Olaf didn’t have a way to engage and participate in team fights and Dyrus teleported late often when TSM got caught out. WildTurtle’s Vayne was too short ranged to fight KT. Most of the damage occurred with TSM retreating from fights after getting caught out so the numbers themselves are rather meaningless. KT meanwhile had Arrow’s Kog’maw do the majority of damage with his long ranged auto attacks and ult allowing him to pick apart TSM. While Darius had many kills, it was mostly clean-up and he didn’t actually do too much damage.

TSM’s vision control starting mid game really fell off. Perhaps they were discouraged after getting caught out so often, but they needed vision to pull off picks.