PVB beat Fenerbahçe in an extremely-bloody tiebreaker to win the group. 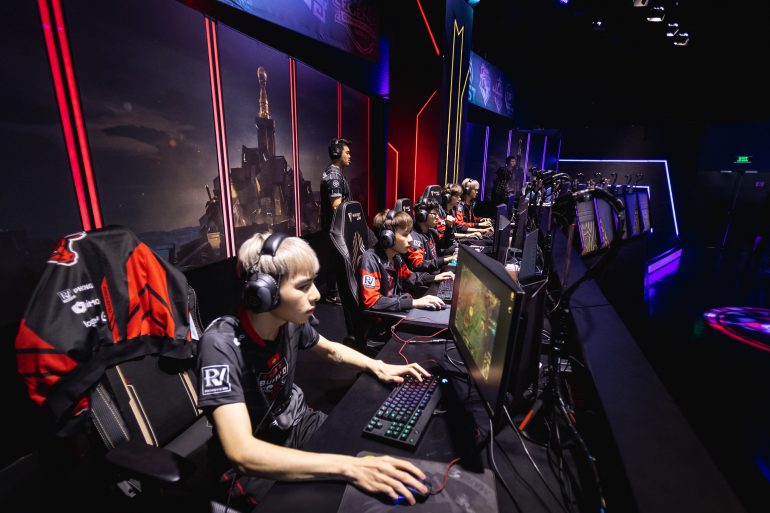 Group A of the MSI play-in stage was labeled the “Group of Death” before the tournament started, and it lived up to that name. After the double round-robin ended, Phong Vũ Buffalo sat tied with 1907 Fenerbahçe Esports, setting up a dramatic tiebreaker for the right to face Team Liquid.

After a nervous four-hour wait—the teams had to wait for Group B to finish first—Phong Vũ Buffalo reigned victorious. They’ll head into a best-of-five against the LCS champions next week for a chance to advance to the MSI main event.

PVB came into the day atop the group, but a late loss to Bombers on day one cracked the door open for the other teams. They bounced back quickly with an easy win over Isurus Gaming in the first game of the day. Jungler Hoàng “Meliodas” Tiến Nhật and mid laner Võ “Naul” Thành Luân combined for play after play, and over the course of the game, PVB surged to a 12,000 gold lead.

Then it was 1907 Fenerbahçe’s turn. They were tied at 2-2 with Bombers—only the winner of the rematch between the two sides could catch PVB. The early game went the way of the Bombers, but 1907 Fenerbahçe’s star top laner Kim “Ruin” Hyeong-min put the team on his back with Jayce and routed the Bombers time and time again. What was a close game blew wide open in the 23rd minute as the TCL champions won a teamfight in the mid lane and then a second battle in the bottom lane to drop the OPL’s hopefuls and set up the deciding clash with PVB.

In a fashion we’ve come to expect from this group, first blood flashed on the screen again before minions spawned as Meliodas’ Kindred face-checked into nearly the entire Fenerbahçe team, handing a kill to mid laner Onur “Bolulu” Can Demirol’s Vel’Koz. But PVB smartly bounced back by targeting Fenerbahçe’s best lane as Meliodas shut down Ruin’s Renekton, opening the floodgates for a brutal, bloody match.

While the kill counts over the course of the game seemed relatively even, 1907 Fenerbahçe had a rapidly-climbing gold lead with their focus on knocking down turrets. A few strong teamfights gave over crucial item spikes for their Kindred and Draven, and after that, Fenerbahçe took control. By the 30-minute mark, they amassed an 8,000 gold lead and PVB couldn’t contest their second Baron of the game. Some helpful RNG in three Infernal Drakes boosted 1907 Fenerbahçe’s damage and they finally overran PVB to set up the tiebreaker confrontation.

The final tiebreaker got off to an extremely fast start as Thomas “Kirei” Yuen went bot side very early on Nocturne for a gank that earned first blood for Fenerbahçe. The Turkish side won both side lanes off misplays from PVB, but PVB’s mid-jungle duo saved the day yet again.
Bolulu did his best to match Naul’s Lissandra with his own Vel’Koz, but in the key mid game teamfights, PVB got more as Fenerbahçe suffered through some crucial communication miscues.

The teams fought again and again. In one extended fight around an Earth Drake, players would die, respawn, and go right back into the action. The two squads combined for 34 kills by 25 minutes. It was the exact sort of match we wanted from two teams fighting for their lives. But then the game hit a lull as the players seemed to realize what was at stake.

For a few minutes, not much happened until Kirei decided to jump in with a fateful Nocturne ult. Unfortunately for Fenerbahçe, all of PVB were in the top side river, and the Nocturne-Rumble engage was unable to burst down one of the carries. Naul survived with the help of Lissandra’s own kit as well as a timely Morgana shield, and then Phạm “Zeros” Lộc cleaned up the fight on the flank.

It was a well-deserved win for the home team, but their work isn’t done yet. PVB get at least two more chances in front of the Vietnamese crowd, starting with the LCS champions. After the match, Merliodas told Rivington “Riv” Bisland that “we haven’t performed our best, we will need to try better.” We’ll see if they do improve when they face Liquid in a few days.