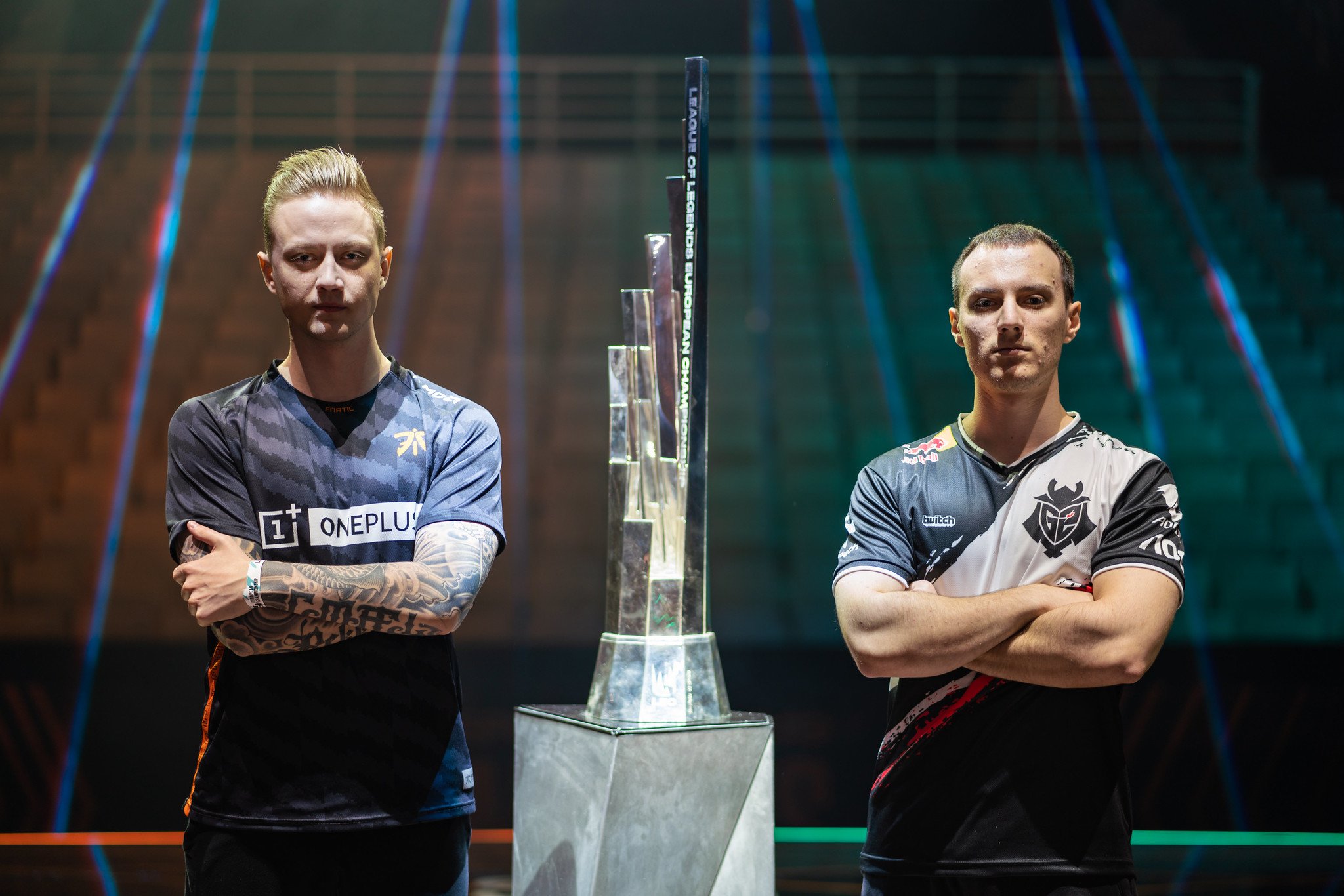 The free agency window is one of the most exciting and stressful times in the League of Legends competitive calendar. With some of Europe’s most iconic players entering free agency this year, it’s looking as though the landscape of the LEC will be seeing some significant changes for the 2021 season.

The LEC is home to some of League’s most storied veterans, but it also has one of the best potential pools of rookie talent in the world. Recent years have seen LEC teams look to Europe’s Emerging Region Leagues to build rosters of upcoming talent with varying levels of success. The downfall of MAD Lions at this year’s World Championship proved some of the risks that can come alongside gambling your competitive success on young, inexperienced players. But in a similar vein, Europe’s rookies have seen some incredible international successes, with players like Bwipo and Humanoid making it to a World Championship final in their first year of competitive play.

The offseason has only just begun, and for now, fans’ questions as to the future of their favorite teams remain unanswered. Certain teams in the LEC will have a lot more to prove than others, with Excel, Vitality, and SK Gaming, in particular, looking to turn around two years of lackluster performances since the beginning of the LEC franchising system.

Here are the big questions we have for each LEC team heading into the 2021 season, whether that be the destinations of big-name players or infrastructure changes for struggling teams.

Misfits Gaming: Will discipline be an issue for a young roster?

Misfits have had some of the most wildly inconsistent performances of any team in the LEC over the past two years, culminating in an eighth-place finish at the end of the Summer Split. The rookie roster showed promise in the spring with jungler Razork winning the LEC’s outstanding rookie award for the split after a slew of hard-carry performances on niche champions like Ekko. His aggressive style needs a stable mid laner as a counterbalance. His penchant for early invades can only work if his mid is willing to sack a wave and turn a fight in the jungle. The team is looking to sign LFL mid laner Vetheo, according to Esportsmaniacos, one of the league’s youngest players at just 18.

Although he’s a strong performer in his domestic region, a young rookie may not be able to provide the stability Misfits are looking for. The team is also reportedly looking to pick up academy top laner Agressivoo, meaning their top side of the map will be exclusively populated by rookies. Kobbe and proposed support Vander will have their work cut out trying to lead the rookie talent. This roster could either surpass all expectations or blow up in Misfits’ faces for the third year in a row.

Astralis: Can this roster surpass community expectations of a 10th-place finish?

The recent announcement of Astralis’ 2021 roster was met with a fair share of raised eyebrows from the European community. Choosing to rebuild around Origen mid laner Nukeduck, Astralis made the controversial move of looking to ex-EU LCS players from the Emerging Region Leagues rather than the traditional route of promising rookies.

Top laner WhiteKnight, AD carry Jeskla, and support PromisQ are all veterans of the European scene but considered by many to be past their prime. Jungler Zanzarah, however, will be making his LEC debut with Astralis off the back of a dominant split with Polish team AGO Rogue, which culminated in victory at the EU Masters Summer tournament.

This roster is, to say the least, a confusing one. The org has taken a page from the LEC playbook of scouting from Europe’s regional leagues. But rather than giving rookies a shot at the title, Astralis has chosen to build a roster of veterans who were unable to find success during their time in a major region. The shining star of this roster is, without a doubt, jungler Zanzarah. But it’s an extremely controversial decision to place carry pressure on such a young player, particularly in a role where carry potential is entirely dependent on the meta.

Excel Esports: Where will they find their star power?

Rebrands aside, Excel will have a lot of work to do this season if they’re going to overcome the underperformance issues that have plagued them since their entrance into the LEC in 2018. They’re the only team playing in the LEC right now that’s never appeared in a playoff series and their promise of a two-year project of success has been full of roster swaps.

It seems as though Excel will be looking for their carry power in the mid lane. With mid laner Special falling short for the team in 2020 after being promoted from their academy roster, Excel will need a decisive, explosive talent to elevate their roster. With AD carry Patrik supposedly remaining for 2021, they have a reliable late-game carry. What they need now is someone willing to make explosive plays in the early game.

One possible option for Excel could come from the ERLs in EU Masters winner Czekolad. As the mid laner for AGO Rogue, he showcased proactive performances and a deep champion pool. Czekolad could work perfectly alongside the reported signing of Fnatic’s academy jungler Dan to provide the hype that Excel has been lacking for so long.

SK Gaming: Should they go for brand names or untested ERL hopefuls?

Performance is the single most important metric for measuring the success of an LEC team. But coming in at a close second is brand value, the recognizability and fandom behind a team. With Crownshot announcing free agency, SK Gaming may lose its most recognized and loved player—and alongside him, a lot of the brand and investment value they gained across the course of 2020 after making the playoffs in the Summer Split.

SK has two choices this offseason: sign a known name and build their brand around them or go for an all-rookie roster and aim for a MAD Lions approach when it comes to garnering fan support.

Schalke’s poor early-season performance has become the preferred meme of LEC fans. They have the worst opening record of any team in the LEC. And although they were able to turn it around to an almost-miracle run this summer, a Worlds spot was snatched out of their grasp by MAD Lions in the second round of the LEC playoffs.

The re-signing of jungler Gilius and mid laner Abbedagge sees the return of Schalke’s greatest strengths during their miracle run. But their penchant for losing streaks suggests that the problems this team faces are much more of an issue in the supporting cast. Now that the team proved to themselves that they can contend for a Worlds spot, they’re in a better position than ever to break their 0-4 curse. It’s unclear, though, whether self-belief will save Schalke from becoming one of the most iconic memes in LEC history.

Vitality: How does this organization return to the glory days of 2018?

Ex-coach YamatoCannon’s speech at Worlds 2018 has become one of the most iconic moments in League esports history. Although they were knocked out of the tournament in the group stage, Vitality forced tournament favorites Royal Never Give Up into a tiebreaker against Cloud9 after going 1-1 against them—an unprecedented success for Europe’s third seed.

There are no traces of that iconic Vitality left in the LEC, though. The team has been consistently weak since the beginning of the franchising system and has never finished above fifth place in the regular season. They’ve struggled to maintain consistent rosters and have frequently subbed players in and out due to various issues, meaning that fans have had little to no time to connect to the roster. Vitality’s goal this split should simply be consistency: find a roster, stick with it, and attempt to rebuild the fan support that’s been lost over the past two years.

MAD Lions: Is this team prepared to handle a potentially in-person LEC?

MAD’s World Championship run has immortalized some of the key issues with an all-rookie roster after they became the first European representative to be knocked out of Worlds in the play-in stage. They showed an incredibly strong performance domestically throughout 2020, becoming one of the few teams to beat G2 in a five-game series. But after their international fallout, many attributed this success to the league’s online format as a response to the COVID-19 pandemic.

Although their roster is reportedly changing for 2020, it’s changing to bring on more young players, meaning there’s a high chance that history repeats itself and their LAN performance lets them down. Issues with mindset and mentality can often indicate a problem in organizational infrastructure and support staff, which is remaining essentially the same for MAD aside from the departure of scouting coach Peter Dun. Will MAD be able to overcome one of the most haunting defeats in World Championship history and show the world that they’re more than just a scrim team?

Rogue: Can they make the LEC anything more than a two-horse race?

There’s a narrative within the LEC that’s existed for as long as most fans can remember. Legacy, dynasty, kings—call it what you like, but Europe as a region has been dominated by Fnatic and G2 for as long as it’s existed. Teams have come close, but nobody has ever been able to replicate the success of these two organizations.

Rogue, it seems, are looking to change that. Going from last place in their opening split to first place in the 2020 Summer Split regular season, this organization has gone from strength to strength over the course of its time in the LEC. Although their Worlds run was cut short in the group stage, many would attribute this to being drafted into one of the tournament’s most difficult groups—and some would say that Rogue have much more to offer than what they’ve been able to show.

The signing of top laner Odoamne to work alongside franchise mid laner Larssen means that Rogue are in contention for some of the strongest solo laners in the LEC, backing up rookie jungler Inspired in his second split of major region play.

Fnatic: Can they ever make up for losing Caps?

Fnatic have never reached the same heights they were able to achieve with Caps. This is an undeniable fact. The loss of perhaps the best European mid laner of all time hit Fnatic where it hurts. They’ve tried numerous fixes to make up for Caps’ departure, most notably in switching the carry responsibility to Bwipo and Selfmade over the course of 2020. Although it was somewhat successful, a return to the Worlds final still eludes them, as does an LEC title.

The reported signing of Nisqy, who helped Cloud9 to an almost undefeated split in the spring, is an attempt by Fnatic to replicate some of the star power they lost. But is this too little, too late? With Rekkles officially leaving the organization, Fnatic has lost yet another core piece of its identity—and the team may not be able to survive it this time around.

G2: What does this team look like without its figurehead?

Perkz’s now-confirmed departure from G2 has been the single biggest narrative of the 2020 offseason. Having played on the team since his competitive debut at the age of 17, a G2 without Perkz at the helm would have long been completely unfathomable. But now, it’s a reality.

Perkz is reportedly looking to return to the mid lane role on C9. His departure would be a crushing loss for European League. But G2 will have to look for a new ADC and find their identity outside of a player who’s been an integral part of the team since 2015. His presence in-game has often been said to be one of G2’s greatest strengths, and without it, the pressure falls on veteran Jankos to provide the backbone to Europe’s greatest team.