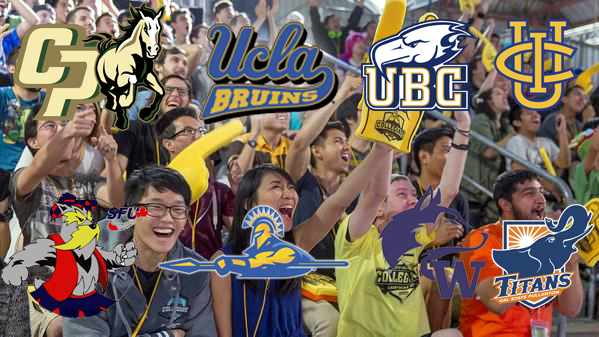 The NACC has been underway for the past few months with hundreds of teams playing for school pride, and scholarship money, and after the dust settled we are now down to our final 32 teams. Let’s take a look division to division at what teams, and players to look out for starting with the West which is the home division to last year’s champion the University of British Columbia.  When one breaks down the West division UBC stands out from the pack early on with their group master tier players with the exception of Dr Bunnybuns who is Diamond 1, and with the exception of Proof (Proof of Payment for those of us that follow the NA ranked ladder) the squad that won them last year’s championship is present, and ready for the repeat run. The player I choose to give the spotlight on this team, though has to be Remie who has to be the strongest Support in this tournament. In the match against Sonoma State Remie racked up 32 assists in the two, and all the while dying Zero times Remie never saw a gray screen unless he looked over at a teammates screen. UBC has very strong individual players, and most have played with each other for more than a year, and this year they have the experience to make the repeat a real thing. UBC’s shot-calling rarely leaves them in an awkward situation it’s not often that a team will catch anyone player by themselves these players just don’t die not giving opponents opportunity’s to comeback in terms of gold.

In the midlane we have San Jose State University’s ArcZSlash not wanting to give all the accolades to UBC I decided to pick ArcZSlash. ArcZSlash can go from conservative to all in burst at any time boasting a very flexible playstyle, and champion pool. If there’s anyone who can expose UBC it could be ArcZSlash, and with a strong Anivia, Le Blanc they may not be the only team they could pose problems for.  The team as a whole has a strong core with Khoasaki in Top ArcZSlash, and BabyBrandon at Marksman. SJSU like to fight with games ending in anywhere from 22 – 30+ kills. SJSU also plays around with a lot of high damage compositions to back up this playstyle utilizing champions like Fiora. Combos also play a large role in SJSU’s success with picks like Anivia, and Tahm kench or Sivir, and Alistar.

Moving to Simon Fraser University we have the jungle TalkPlayLove who can be seen as the Rush of the West Division, and with champions like Elise, and Nidalee one could see the comparisons in champion pools in the match against Santa Monica College TPL went 1/1/12 as Elise, and 24/5/2 as Nidalee that’s almost more kills than everyone in the game combined. TPL’s item choices are not conservative either TPL does not want to wait for the game to drag, and will elect to carry the game, but unlike most TPL can. Simon Fraser Just based on individual ranking should be turning heads with their weakest player sitting at Diamond 1 and their strongest player at Challenger so they got raw skill checked. Simon Fraser has the tools now we just need to see if they can implement them against the more seasoned teams like UBC, and Robert Morris, but Simon Fraser can be seen as the team to challenge UBC in the West on terms of individual skill alone.

There’s going to be some battles at the ADC Postion in the West, and California State Polytechnic University’s LockOnStratos makes the race with Heatwave for best ADC a close one.  Over the span of three game with Jinx LOS have gone 23/6/14, and if you take Jinx LOS will just play something that exposes the weakness of the champion.  LOS’s botlanes seem to have the same strategy by picking something with a lot of built in cc in the support he lanes with, and leaving the damage to him the lanes may not win many damage trades, but the obvious level 6 power spike is well worth it for this bot. California State Polytechnic University runs a lot of beefy compositions leaving the heavy damage to the mid and the adc. LockedOnStratos is the huge damage threat on the team along with mid who CSPU picks in the form of a very poke heavy mid usually TF or Lux and with the heavy engage the team usually runs it allowes them to pick and choose fights depending if mid was able to whittle them down.

The toplaner I picked to give some shine is the laner from University California Irvine’s Z O T B O Y S’s Tower of God. Tower of God does not allow himself to play conservative he has a very in your face playstyle, and his champion pool makes for a very exciting player to watch he picks things like Poppy and ignite teleport Hecarim. He can also pull out things like Gangplank something San Francisco State University learned the hard way when Tower of God went 7/1/2 in their round 2 matchup leading the charge to an otherwise easy win. Tower of God trades well in lane rarely being on the opposite side of a trade in the toplane show an understanding of his damage vs his lane opponent. The Z O T B O Y S play around the top lane, and the botlane having Tower of God play champions that bring a lot of damage and utility to Teleport plays.

The NACC is young, but these players need some spotlight with the fact they hit the books at some of the country’s most well-known universities, and they play hard with some teams being challenger teams so they do put in the time. Year to year the NACC is getting bigger, and this year is no exception with over 500 school, and having this level of play along with leagues ranked 5’s ladder only gives NA players another outlet to practice strengthening out player base. I hope this year’s tournament is as exciting as last years as the round of 32 commences. Next article we will take a peek at the south division, and see what players should be watched this year, and a small breakdown on the teams that look to upset the West and North divisions