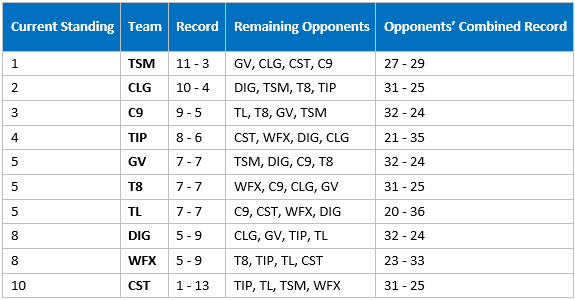 The NA LCS regular season concludes in two weeks, and none of the ten teams has secured a final position in the standings. There are close races throughout the standings as teams either vie for playoff spots or try to avoid auto-relegation. The top six teams in the standings at the end of the regular season will qualify for the playoffs – with the top two seeds earning a highly-coveted first round bye. Each team has four games left, and the strength of the remaining schedules will have a large impact on the final results. In this article, I show each team’s remaining strength of schedule and write about each team’s chances to move up or down in the standings. The table below shows a summary of the current standings and each team’s remaining opponents’ combined win-loss record.

TSM’s remaining schedule can be classified as difficult due to playing games against CLG and C9, two of the top three teams in the current standings. TSM beat its remaining opponents in the first matchups, but there will be new wrinkles to the matchups, like TSM now being on red side in its match against C9 (red side historically has a lower overall win rate in the LCS). Beating CLG and/or C9 all but guarantee TSM a top-2 seed in the playoffs, but losing to those opponents could cause TSM to fall to third place.

Three of CLG’s next four opponents have win rates at or above 0.500 – indicating a fairly tough schedule, especially given TIP’s recent surge up the standings. Similar to TSM, CLG also has a (3-1) record against the remaining opponents. Beating TSM and TIP would go a long way toward solidifying a top-2 finish, but CLG could easily lose three of its last four games.

Cloud 9 has one of the toughest remaining schedules of any team, with every opponent having a win rate at or above 0.500. Cloud 9 has never finished outside the top-2 in the regular season standings, but this could very well be the first time. Cloud 9 has suffered uncharacteristic struggles this season, and has secured a win over only two of its remaining four opponents. Cloud 9 could gain valuable experience while playing at IEM Katowice this week which could help them in their last four LCS games. C9 will most likely need to win at least three of its remaining games to have any chance of securing a top-2 finish.

TIP boasts the longest current win streak at three games, and has the easiest remaining schedule of the top four teams. TIP plays only one team with a record at or above 0.500 (CLG), but did lose to CLG in the first matchup. A strong 4-0 finish could cause TIP to slip into a top-2 finish and spoil CLG’s or C9’s hopes for a playoff bye. Seeing how teams respond to midlaner XiaoWeiXiao’s new Karthus pick will be interesting. TIP was inconsistent throughout the split prior to the recent win streak, but the team will most likely extend its win streak to at least six games. The last game of TIP’s regular season against CLG could have major playoff implications for both teams.

GV is currently tied in 5th place with T8 and TL. At least one of these three teams will miss the playoffs. In comparing the schedules amongst these three teams, GV has the hardest remaining schedule. GV and TL split the season series 1-1, but GV won the first matchup with T8. Beating T8 again and securing at least one more win will most likely secure GV one of the final playoff spots, as GV would own the tie-breaker over T8. GV did beat C9 earlier in the split, but C9 has improved since then and should be a more formidable opponent in the second matchup.

T8 is one of the standout underdog stories in the NA LCS this split. Many LCS followers would have considered T8 to be a bottom-2 or bottom-3 team prior to the start of the split, yet T8 has stayed in the middle of the standings for a majority of the split. T8 boasts wins over top teams like TSM, TIP, and TL and could secure one of the final playoff spots with a strong last two weeks. The match against GV is a must-win game for T8, and T8 will most likely need to win at least one game against C9 or CLG to lock up a playoff spot. Fortunately for T8, its games against CLG and C9 will be on blue side, potentially providing an opportunity for the team to secure a strong first pick for one of its carries, top laner CaliTrlolz8 or jungler Porpoise8.

TL has one of the easiest remaining schedules of any team. TL has probably been the most disappointing team in the league this split, especially after getting off to a hot 2-0 start and leading the standings after the first week. TL surprisingly has a 1-3 record against its weak remaining opponents, but TL on paper should beat at least three of the teams. Winning three of its last four games will most likely secure TL one of the last playoff spots. Will the forever fourth curse continue?

DIG’s remaining schedule is brutal – all four of its opponents have win rates at or above 0.500. DIG found success in its first match against TL, but lost its first matches against the other three remaining opponents. DIG’s season has been substandard to say the least, but DIG could still avoid a spot in the promotion tournament. DIG historically has performed worse in the second half of splits, but the team’s recent swap to jungler Azingy could provide a unique challenge for some of the top teams.

WFX is currently tied for 8th place with DIG. After finishing last split with a 4-0 record in the last week of the regular season, WFX was seemingly poised to vie for a top-4 finish this split. WFX is probably the second-most disappointing team this split, and recent roster swaps have proven ineffective thus far. WFX has been plagued with inconsistency throughout the split, evidenced by its 2-0 record against its two toughest remaining opponents (TIP and TL) and its 0-2 record against its two easiest opponents (T8 and CST). WFX has the proven ability to take games off top teams this split, and it wouldn’t be a stretch to assume that they’ll probably win at least one of its first three remaining games – most likely making the final showdown with CST simply a fodder game.

CST’s only win is against one of its remaining opponents (WFX), but WFX at the time was using three temporary substitutes. At this point, it would take somewhat of a miracle for CST to avoid racking up a 15-game losing streak (the streak is currently at 12). CST has a decent chance to beat a discombobulated WFX in its final game, but all signs point toward CST finishing the season in 10th place and being auto-relegated.