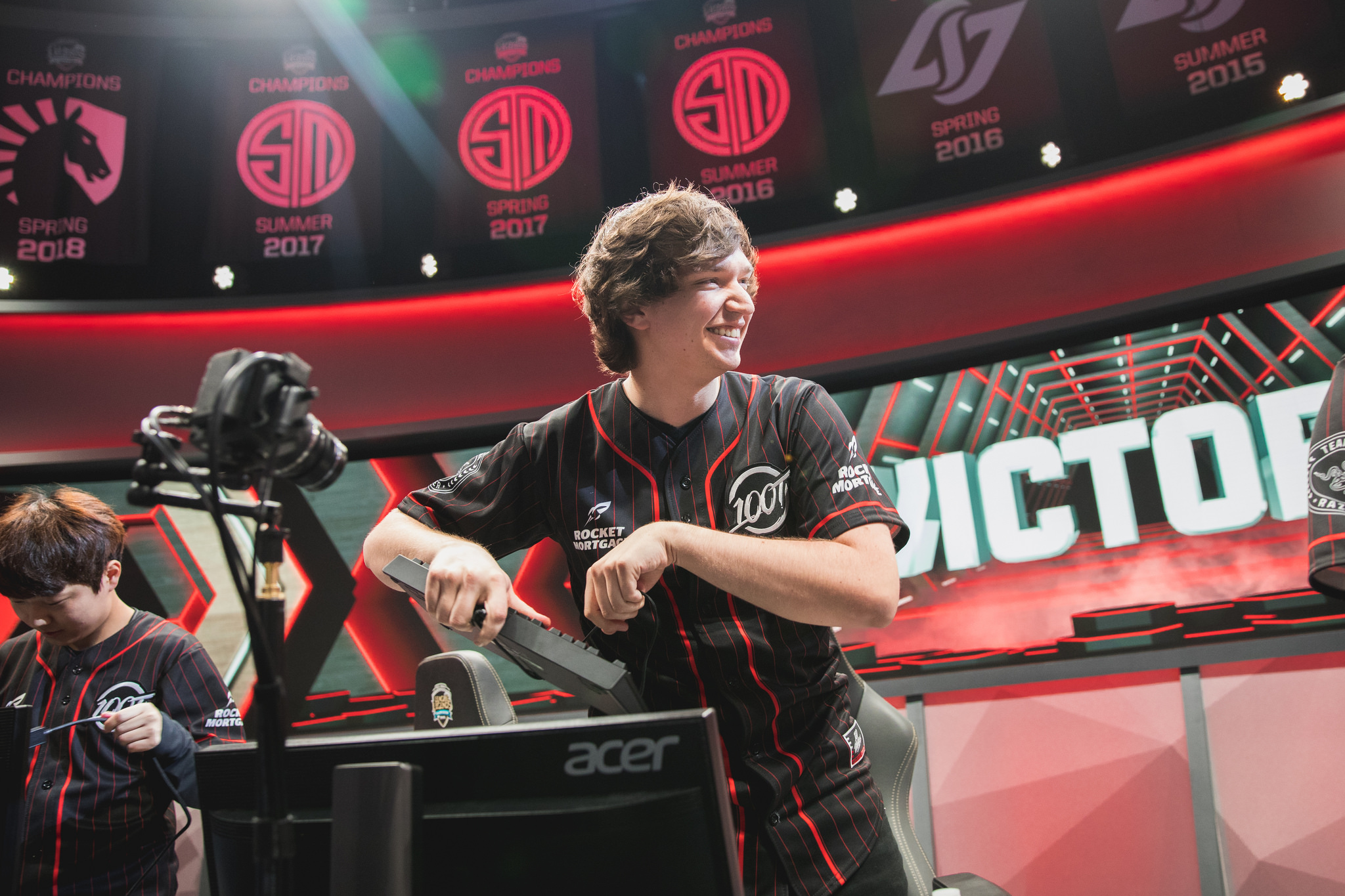 Things in the League esports world are usually pretty quiet after the conclusion of the NA LCS on Sundays. It marks the end of a hectic week of play across many regions as most leagues—except the LPL—take a few days off.

But the end of week three wasn’t quiet. 100 Thieves starting jungler William “Meteos” Hartman revealed in a stunning tweet—that he later deleted—that he had been traded to FlyQuest.

The tweet came just a couple hours after Meteos helped 100 Thieves move into a tie for first place with a dominant victory over OpTic Gaming. It marks the first time a starting player has been traded in the era of franchising.

So why would a first-place team make a shocking change in the middle of a win streak? And what do FlyQuest have to gain from the transaction, especially since it looks like they won’t start Meteos immediately? We broke things down to try and figure out this crazy puzzle.

What it means for 100 Thieves

The biggest question is what will happen to 100 Thieves, who lost two games to start the split before going 4-0 in the last two weeks, albeit against some pretty poor competition.

There’s a big possibility that a move of this magnitude wasn’t motivated entirely by performance. After all, 100 Thieves were in the midst of that win streak, and have generally shown improvement since the first day of the Spring Split.

But the improvement hasn’t always been linear. In an episode of The Heist, the team’s weekly reality show, that was released a few weeks ago, we saw some of the fissures between Meteos and head coach Neil “pr0lly” Hammad as 100 Thieves prepared for the Summer Split.

It’s hard to read too much into these highly-edited videos, but it seemed like Meteos approaches the game in a fundamentally different way from pr0lly and the rest of the team. Performance can improve over time, but the team may have decided that they couldn’t overcome this sort of personality conflict.

One of the biggest free agent signings of last offseason was 100 Thieves’ pickup of GIGABYTE Marines jungler Do “Levi” Duy Khánh. Levi captivated audiences at both MSI and Worlds last year by carrying his team in crazy and inventive ways. A lot of what GIGABYTE did last year seems like the spiritual predecessor to the funnel comps and other crazy strats that we’ve seen around the world this summer.

Back then, it felt inevitable that Levi would eventually crack the starting roster. Someone of his talent level just isn’t meant for the Academy league. Give him a few splits to adjust to the region and the language and throw him in there.

The problem is, Levi hasn’t exactly been setting the Academy league on fire. In fact, his feeding of two early kills to FlyQuest led to 100 Thieves’ latest loss. He’s still just potential at this point.

100 Thieves decided that they wanted to see more of the potential when they announced that Levi would start in next week’s Rift Rivals tournament. At first, that seemed pretty innocuous. Rift Rivals doesn’t have any bearing on playoffs or Worlds, making it the event to conduct an experiment and then move back to the regular roster for the rest of the split.

Trading away Meteos sets the stage for Levi to lock down the starting jungle spot for good. But that creates another sort of conflict.

Top laner Kim “Ssumday” Chan-ho and mid laner Yoo “Ryu” Sang-ook both arrived in America in 2017, making this their fourth competitive split in the region. They both have two more years left before they can satisfy Riot’s requirements to be considered domestic players and not subject to the two-per-team import restriction.

That’s a problem if 100 Thieves want to start Levi. Someone’s going to be the odd man out. Ssumday, of course, will also sit out Rift Rivals, which may mean the team will move on from him. He’s rumored to be one of the region’s more highly-paid players, and trading him could be a financial decision.

But at the same time, Ssumday has played a vital role as a do-it-all top laner who can be counted on to hold his side of the map. Known in Korea for his tank play, he’s been a carry in recent weeks as 100 Thieves have played funnel compositions.

Ryu, on the other hand, is a much weaker player in both mechanics and comms. But he’s also a brilliant tactician who sacrifices for the team and helps devise winning strategies. In many ways, he’s the brains of the operation, just not on stage.

Letting go of either player will mean 100 Thieves will have to change something fundamental about their team. But it seems they’re locked into that path anyway.

What it means for FlyQuest

For much of its existence, FlyQuest has defied convention. They made some noise last year by building around mid laner Hai Lam, but dumped him before this season. They were supposed to transition to Song “Fly” Yong-jun, but couldn’t make it work—and now Fly is killing it in the LCK, his home region.

It’s really hard to figure out what FlyQuest are doing now by adding Meteos because none of their moves have ever made sense. Signing Lucas “Santorin” Larsen between splits didn’t make sense, and starting him over Meteos is even more nonsensical.

So rather than try and guess at what FlyQuest will do, let’s just move on to the man himself.

100 Thieves actually had to bring Meteos out of semi-retirement to play this year. After a year of mostly sitting on the bench for Phoenix1, Meteos seemed pretty content as a streamer. But after making it back into the LCS, he made it clear that he wasn’t to be trifled with.

In an interview with Unikrn, Meteos was asked about Levi and the Academy team and indicated that he wasn’t afraid of being replaced.

“I’m not too worried about [getting replaced] because of the import rule,” Meteos said. “Since we already have Ssumday and Ryu. So unless there’s some drastic change to the team, I don’t think we’re going to be able to fit Levi into the main squad.”

Well, now that change has happened. The most bizarre part is that FlyQuest haven’t offered him the starting jungle position. In the same interview, Meteos talked about how awkward it is working with Academy teams, since Academy players are looking to eventually replace the LCS starters.

“I do think, from a player’s interests, you don’t really want to help your Academy counterpart,” Meteos said. “On a personal level, I would want to because I like talking about the game, but from a career standpoint, it doesn’t really make sense.”

That doesn’t sound like a guy you would want training your Academy team. So that leaves two options: Another trade, or another break. A trade is highly unlikely because 100 Thieves would likely have found it. Why go through FlyQuest if Meteos is a wanted commodity?

That leaves a return to the streaming life. Meteos can join good friends Hai as a full-time streamer and make a comfortable living without the pressures of the LCS.

The first of many

This is the first big trade to happen in the newly-franchised LCS, but it certainly won’t be the last. Before his tweet was deleted, Meteos created quite a stir on social media from his supporters.

For their part, 100 Thieves—and league officials—could have handled this better. At the time of writing, hours after Meteos’ initial post, neither have commented on the news. There should be a plan in place for how news of this nature is broken to both players and fans.

The fact is, there will be more trades like this in the future. Team managers and coaches are charged with doing what’s best for the organization first, not coddling their players. Tough choices will be made, and as long as players don’t have no-trade-clauses—which are rare in sports—this type of unexpected news will continue to drop.

That doesn’t make it any easier for Meteos or the emotions less raw. But that’s part of the job, dealing with the ups and downs of being a professional athlete and coming out better for it.