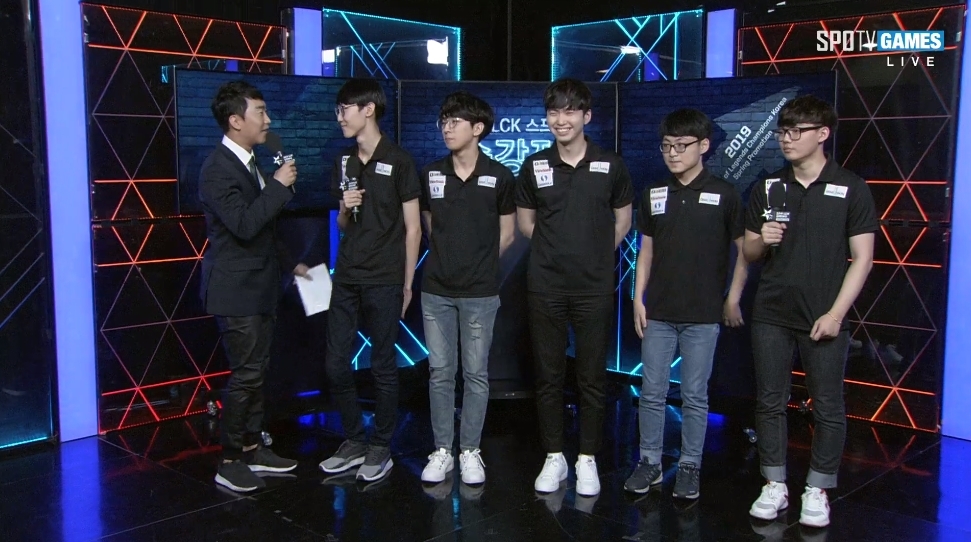 DAMWON Gaming were supposed to enter the LCK last summer alongside Griffin.

Close behind Griffin during their undefeated run through Challengers Korea in spring, DAMWON ended the regular season 11-3—only having a losing record versus Griffin. But before DAMWON could have a shot at taking either Kongdoo Monster or MVP’s LCK spot, they were suddenly knocked out of the 2018 CK Spring playoffs in a 1-3 upset loss against Ever8 Winners.

Eight months have passed since DAMWON’s loss to Ever8, and in that time DAMWON have climbed their way into LCK qualification, looking stronger than ever. From the start of the 2018 CK Summer Split to the end of the LCK 2019 Spring Split promotion tournament where DAMWON qualified for the LCK, DAMWON suffered only one match loss against Sandbox Gaming, then known as team BattleComics, who have since also earned a spot in the LCK via the promotion tournament.

And like Griffin in June, DAMWON enter their inaugural LCK split with high expectations from fans and pundits alike.”[DAMWON’s] the type of team you want at Worlds,” Fnatic AD carry Martin “Rekkles” Larsson said in an interview with Travis Gafford prior to the 2018 World Championship quarterfinals. But Fnatic’s praise of DAMWON didn’t end with Rekkles. Fnatic top laner Gabriël “Bwipo” Rau “made it sound like you just couldn’t touch DAMWON or Griffin in scrims, and that there was nothing that Fnatic could come up with to beat them,” bbq Olivers head coach Nick “LS” De Cesare told INVEN Global when asked about the newest LCK team.

For those who haven’t kept up with Korea’s secondary league though, DAMWON is nothing more than a name that has suddenly risen in notoriety over the last few months. With the LCK set to resume on Jan. 16, now’s the best time to get learn about the five players which have brought DAMWON to League of Legends prominence.

Although he’s both willing and able to play tanks, Nuguri’s specialty is his carry play on champions like Camille, Jayce, and Aatrox. And when Nuguri finds leads on those carries, DAMWON likes to have the top laner spend his excess gold on a tent, which he pitches in either side lane.

ShowMaker on the other hand, spreads his wealth to his teammates, constantly roaming bot lane with jungler Son “Punch” Min-hyuk. Once the bot lane turret is taken, ShowMaker will then lead four-man expeditions with the purpose of sieging the mid lane, all while Nuguri continues his solo mission in either side lane. If viewers were lucky enough, ShowMaker would be on his special Katarina pocket pick—yes you read that right, ShowMaker manages to make Katarina work in on-stage games.

But pocket picks aside, this carry combo of Nuguri and ShowMaker forces teams to make two decisions. The opposition either sends multiple people to stop Nuguri and leave their mid lane vulnerable to a dive, or ignore Nuguri and try to fight a four-vs-five against a cautious DAMWON with Nuguri potentially joining in seconds with his teleport.

Despite playing supportive roles on DAMWON, neither Punch nor their summer acquisition Sin “Nuclear” Jeong-hyeon are the team’s support, that spot is filled by Ryu “Hoit” Ho-seong. Punch’s focus has historically been to assist Nuguri and ShowMaker, while Nuclear is DAMWON’s late-game assurance policy.

Having two solo laners who consistently accrue leads by themselves, Punch’s goal in the early game is simply to gank, or use the pressure exerted from Nuguri and ShowMaker to push into the opponent’s side of the map. Punch’s playstyle is most reminiscent to that of KINGZONE DragonX jungler Moon “Cuzz” Woo-chan during the 2017 LCK Summer Split, who also supported strong laners in Kim “Khan” Dong-ha and Gwak “Bdd” Bo-seong.

While Punch spends the majority of a match’s early game in proximity to his teammates, Nuclear is usually left to fend for himself. Having a support like Hoit who likes to constantly roam mid and coordinate ganks with Punch, Nuclear is often given the task of simply surviving in two-vs-one situations.

For most of the summer, Nuclear was on Kai’Sa, quietly scaling alone in the bot lane while Hoit gallivanted around Summoner’s Rift helping the rest of DAMWON.

More recently, as DAMWON experiments with different playstyles, Nuclear has received more focus in the early game, with Hoit becoming more willing to play lane-dominant supports like Morgana instead of only engagers. With this newfound attention, Nuclear has flourished—especially when on Yasuo and Varus.

The next coming of TusiN?

There are few things in competitive League of Legends more satisfying than an engage that incapacitates three or more enemy champions. In 2018, now KINGZONE DragonX support Park “TusiN” Jong-ik was the supplier of such plays. Known for his prowess on engage supports, most notably Rakan, TusiN routinely found multi-man engages that completely changed the game’s flow in his team’s favor. But Korea had another support also known for his Rakan, who spent the summer making similar plays—Hoit.

“It’s time for me to show TusiN how to play Rakan,” Hoit said in the post-game interview after qualifying for the LCK. Minutes before securing their place in the LCK, Hoit had caught out Sandbox’s bot lane duo under their turret using Rakan’s grand entrance ability, which Nuclear then comboed with his last breath ultimate as Yasuo. Although such a play carried the risk of backfiring, giving Sandbox a way back into the game, Hoit had built his playstyle around such risk-taking endeavours.

Whether it be tower dives or invades into the enemy jungle early in the game to gain vision and learn the opposing jungler’s whereabouts, Hoit regularly plays with an air of fearlessness. And while at times such a cavalier playstyle has gotten Hoit killed, other times it has been the catalyst for game-changing plays in favor of DAMWON.

Fearless not only describes Hoit, but DAMWON as a whole. For DAMWON, the reward is much greater than the risk, thus creating instances where their side lanes are constantly pushing during the laning phase, or 2-4 man units invade the enemy jungle, both of which are done with or without adequate vision control. If trouble ever arise from this brazen play, DAMWON would rely on their superior mechanical ability to out-play their opponents—a strategy which didn’t always work out.

But with the addition of 2018 world champion coach Kim Jeong-soo, and rookie jungler Kim “Canyon” Geon-bu, DAMWON are making changes around their play. These changes can be seen in their recent KeSPA Cup top four finish, where they knocked out SK Telecom T1 in the playoffs with compositions centered around Nuclear, rather than their solo laners.

There’s no way of telling if DAMWON will continue to change in the coming months, or if they will simply revert to their solo laner-focused playstyle come the LCK. No matter what DAMWON choose to do though, let’s just hope it involves ShowMaker’s Katarina.