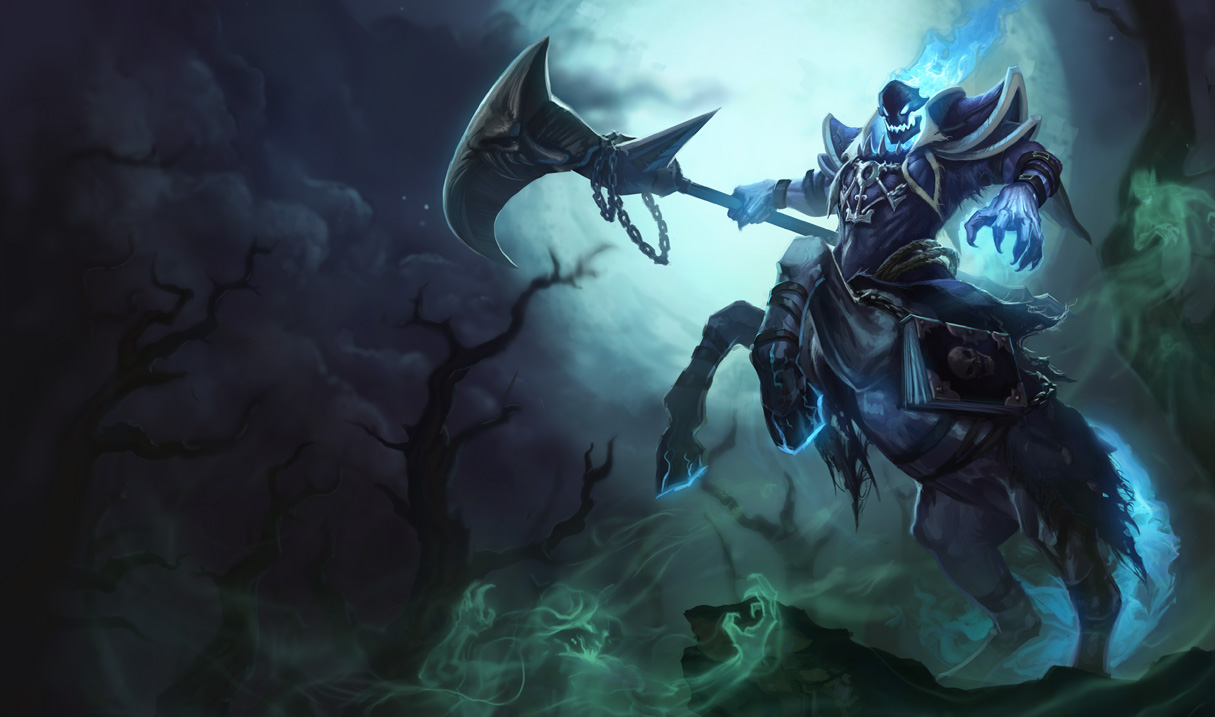 In the first two weeks of the North American LCS, a comprehensive understanding of the current meta was keenly observed by all teams.  Everyone had done their homework and understood which champions and team compositions were in positions of power.  They recognized who should either be swooped up early in the draft or expelled altogether.  Everyone’s favorite pony, Hecarim, was conspicuously missing from this list.  After surprisingly effective showings leading up to the start of the season, Hecarim was set to potentially join the ranks of top tier champions.[1]  It has been no secret that Team SoloMid top-laner Marcus “Dyrus” Hill has been spamming Hecarim in Solo-queue.  With one of the most well-known players favoring the Shadow of War and the strong performances that Hecarim had put on elsewhere in the competitive scene, there was a bit of hype surrounding the champion.  Sadly it would seem that Hecarim may have missed his chance, as he has yet to make an appearance in the NA LCS.

His absence so far is somewhat unexpected given that heavy dive compositions are the favored flavor of the moment, and Hecarim has one of the strongest initiations in the game.  The area of effect fear provided from his ultimate, Onslaught of Shadows, gives his team ample time to follow up on his engage while he continues his rampage through the backline and straight to the squishies.  There are a number of factors that can account for this horse failing to show, let alone place, so far this season.

In a recent AMA on his own subreddit Dyrus was asked why he had not chosen to display his murderous equestrian skills on the rift yet.  His response, “meta says no” was simple, if slightly cryptic.  In order to understand why exactly Hecarim does not fit into the current meta, despite his strong dive, we need to look at the prevailing top lane picks and bans in the first two weeks.

After 20 League games played this season there have been a total of 45 different champions either picked or banned.  Although this shows a great amount of champion diversity, considering there are 123 champions available and there have only been two weeks of play, certain names are more prevalent than others.  Top lane has shown to have one of the most rigid metas of any lane.  Top-laners account for 5 of 10 champions that have been either picked or banned at least ten times this season.[2]  Lissandra, Kassadin, Gnar, Rumble and Irelia (in that order) are the five most consistent top-lane faces thus far.  Because Kassadin is such a flex pick and Irelia has lagged slightly behind in terms of NA LCS appearances, Lissandra, Rumble, and Gnar can be considered the lone, undisputed champions of top-lane in the current meta.

These three match-ups are all nightmares for Hecarim.  Aidan “Zirene” Moon was kind enough to shed some light on exactly why top-lane Hecarim is not currently a viable option in relation to these power picks:

“My insight into Hecarim is that he destroys melee match ups but doesn’t do well in ranged match ups. The top lane is currently dominated by mostly ranged champions such as Gnar, Lissandra, and for sake of functionality we’ll put Rumble there as well.”[3]

According to Zirene, the “Golden Mechanic” to remember in top-lane trading is minion aggro:

“Minion aggro is drawn when you use Basic Attacks on enemy champions, but not when you use spells. This means as a Ryze, if I Q you, I won’t draw minion aggro, but if I Q + Auto I will and I have to think about if the Auto attack is worth the possible trade.”

As a melee champion Hecarim will generally find it difficult in match-ups against ranged champions.  Considering the fact that all three of the current power picks in top are able to dish out some form of long ranged harass, our pony will have a difficult time in lane.  Lissandra and Rumble are able to take easy trades with Hecarim by using abilities against him whilst not risking aggression from enemy minions.  Gnar, though using Basic Attacks to deal his damage, can skew the trade greatly in his favor due to the passive of his ‘W’ ability, Hyper.

The prevalence of early lane swaps is another reason why Hecarim hasn’t found a start yet.  As if the thought of a straight up match up against Gnar, Liss, or Rumble wasn’t hard enough for Hecarim, just imagine throwing him into a 2v1 lane.  While the potential rewards come the mid-game are there, they are too easily diluted by the high risk early game that Hecarim is susceptible to.

This does not mean that there is no hope for our four-hooved friend.  The reason Hecarim has managed to find play outside of NA is the fact that he is incredibly strong in melee match-ups.  His ability to spam Rampage in lane combined with the substantial healing he gets from Spirit of Dread, make protracted engagements with him ill-advised to say the least.  His kit enables him to constantly push his opponent to tower, freeing him up to take a quick gallop to mid-lane or do a little exploring in the enemy’s jungle where can grant his team a bit of vision.  Hecarim’s strengths are relatable to the popularity of Renekton in the beginning of Season 3. Both champions are able to bully melee match-ups whilst sustaining in lane, the downside to Hecarim being that he runs off of mana whereas Renekton does not.  With that in mind the usefulness of Hecarim’s ultimate and his incredible mobility allows him to scale better into the late game.  As Zirene put it, “If the meta shifts out of top lane mages and ranged attackers, then he’ll have a spot.”

As of now however, the meta in North America is far too reliant on the likes of Lissandra, Rumble, and Gnar.  Hecarim’s failure to see play thus far has less to do with any glaring weakness, and more to do with the fact that his probable match-ups counter him particularly hard.  Be sure to keep an eye out to see if Hecarim can find a start in Day 1 Week 3 of the NA LCS.  Watch the games live starting at 3pm EST/12pm PST over at lolesports.com.

[1] Armyx just wrote a terrific article for none other than GP10 discussing top-lane Hecarim as well, and I highly suggest you all check it out: http://www.goldper10.com/guide/811-meet-your-meta-top-hecarim.html

[2] This statistic is inclusive rather than exclusive.  I.E. due to the fact that hybrid picks like Kassadin can go mid and top they essentially count for two roles rather than not at all.

[3] Aidan responded to my questions concerning Hecarim and his viability in the top-lane, and I want to give him a big thank you for his insight into this piece!  You can follow him on Twitter @LoLZirene