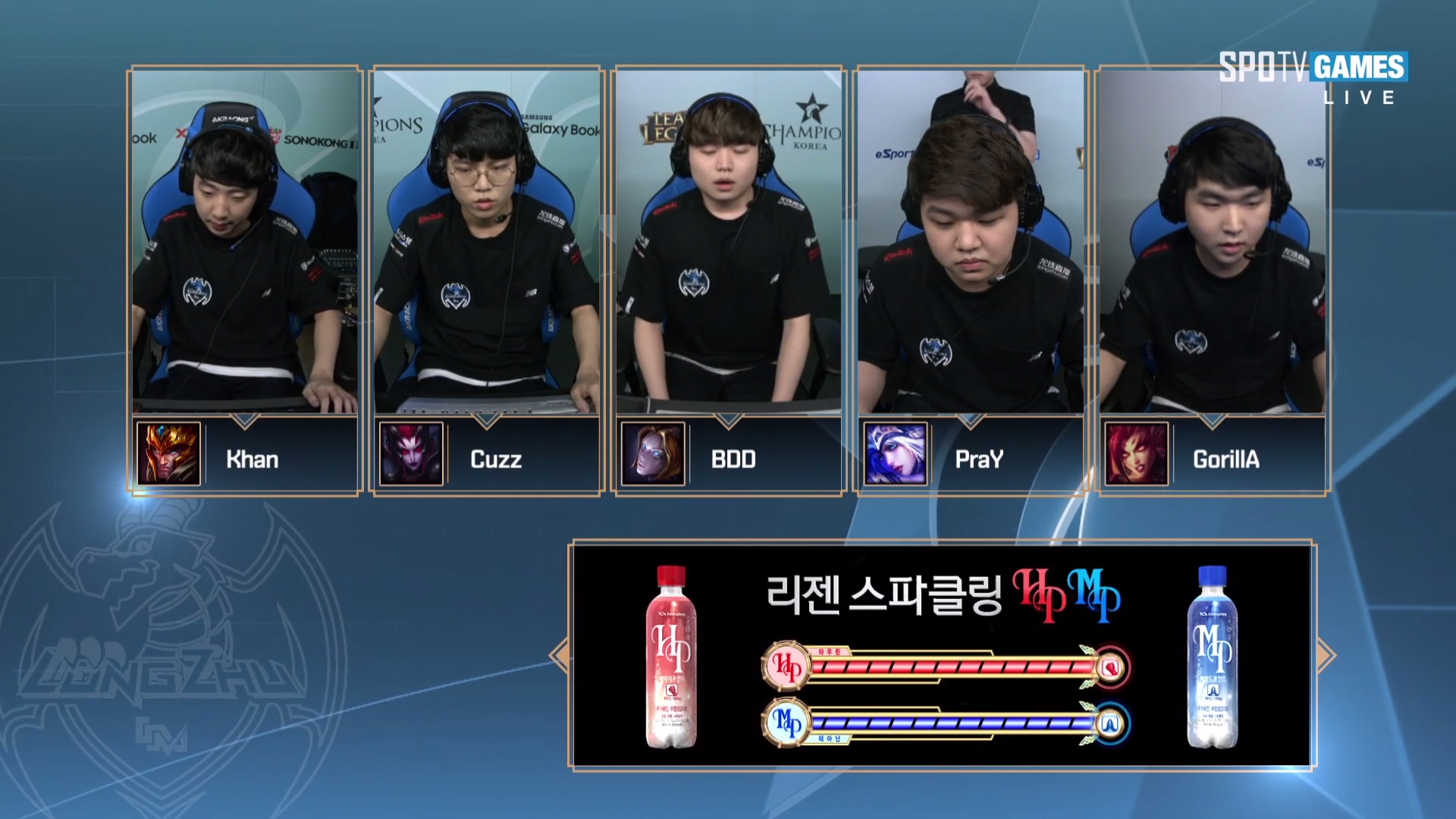 In its brief history, Longzhu Gaming has become known for bitter disappointment.

Star-studded rosters signed over the last couple years have underperformed severely, and the team has yet to post a winning split. Even when the team seemed to pull it together in the middle of last split, and we wondered if they could challenge SK Telecom T1 and KT Rolster at the top of the table, they followed up by going on another losing streak and missing the playoffs.

The offseason wouldn’t be much better. First, their respected coach left for North America, then came news that they weren’t paying contract on time. It seemed like it could be the last straw for an organization that has so far been an abject failure.

Needing something to give them a boost, the team jettisoned everyone outside of the talented former ROX Tigers duo lane of Kim “PraY” Jong-in and Kang “GorillA” Beom-hyeon. Starting at the top lane and jungle would be two rookies, Kim “Khan” Dong-ha and Moon “Cuzz” Woo-chan. The mid laner would be Gak “Bdd” Bo-seong.

With the new players, it seemed like the Summer Split would be a fight for survival. After all if more talented rosters fell apart on the LCK stage, what hope did this new group have?

Whatever chance they had at winning some games looked like it would have to wait past their first game, scheduled against a KT Rolster squad that many pegged to reach their potential this summer. The rookie top laner would be playing against Song “Smeb” Kyung-ho, one of the best players in the world. Cuzz would have to try and shut down Go “Score” Dong-bin, a decorated veteran jungler. This was possibly a worst case scenario for the young players, outside of facing SKT, of course.

Instead, when the teams loaded onto the rift, the rookies more than stood up against their competition. Khan was a monster, picking Jarvan IV in both games and more than holding his own. In the first game he bodied Smeb’s Gragas, surviving an early game before laying on some hurt of his own that allowed him to achieve an early kill lead.

And Cuzz, building a glass-cannon Elise, made good on the Spider Queen’s early power. His champion pool was a question going into the season, but he showed good play on meta champions in this series. While Score’s ganks looked disjointed Cuzz focused on shutting down the duo lane—KT’s strength at the end of last split.

Khan solo-killing Smeb is nice, but look at the LZ vision in the bot-side river in the following clip:

Smeb was able to stabilize in the top lane, even getting the first turret for KT, but Longzhu’s bot-side priority would turn into dragon after dragon and objective after objective. But it wasn’t just the duo lane and jungler. They had a lot of help from the man in the middle.

Bdd has been on the cusp of greatness before. A teenage solo queue sensation with a wide champion pool and a penchant for assassin play, he reminded a lot people of SKT star Lee “Faker” Sang-hyeok.

But that potential never led anywhere. After a lost season with CJ Entus, in which it became the first organization relegated from the LCK, Bdd dropped off the map and headed to China and getting buried last spring.

His opponent in this series was Heo “PawN” Won-seok, a solid if not spectacular player. PawN has had his moments, but he was one of the team’s worst performers against the real Faker in the Spring Final.

Bdd may have taken some confidence from studying that series, because he absolutely crushed his lane. PawN received a lot of criticism from the community after the game, and it was deserved. He missed CS, he was late on roams, and by the end of the first game, he was relegated to split push duty, hoping just to draw someone from Longzhu to match him and get away.

But the real disaster for PawN was game two. Playing Fizz, historically one of his best champions and someone he won a World Championship with, he submitted a dismal performance.

Facing a 24 CS deficit, PawN tried to attack with his jungler incoming. But KT failed to account for the mobility of Cuzz’ Lee Sin, PawN failed to either dodge the Shockwave or use his own ult, and the deficit got even worse. Things would not get better.

Miss-timed usage of the Fizz’ Playful Trickster, which makes the champion untargetable. Whiffed ults. And that ballooning CS problem. KT was playing four vs. five and Longzhu punished them.

There’s a long season ahead of both of these teams in the LCK. KT fans don’t need to overreact, but a lot of their decision making, teamfighting, and macro issues from Spring appear unsolved. They’ll need to grow together as a team in a hurry if they want to be serious title contenders.

And Longzhu fans should know by now to be wary of false confidence. We don’t know what the rookies will look like once teams learn to draft against them. Maybe Khan won’t get that Jarvan again the whole year. Consistency will likely be an issue going forward.

But they have see the potential that these players possess. They still have PraY and GorillA, who can win games on their own. And they have hope. For a team with a history like Longzhu’s, hope may be the most powerful weapon.