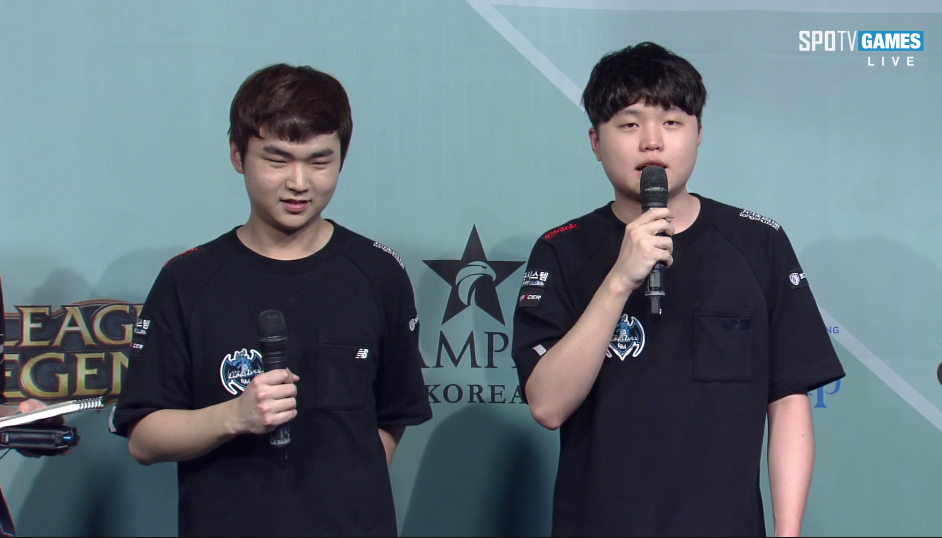 It was fitting that Samsung Galaxy and Longzhu Gaming would close out the Summer Split regular season with a series that had so much on the line. Following KT Rolster’s loss to SK Telecom T1 earlier this week, it was determined that the winner of today’s match between Samsung and Longzhu would earn the first seed, guaranteeing them a spot in the LCK finals.

For Longzhu, this was a new experience. This marks the first time that Longzhu have made the playoffs since the organization rebranding from Incredible Miracle in 2016—and now they’re fighting for a spot in the finals.

In game one, Longzhu’s early attention on their veteran duo in the bot lane wasn’t surprising. Longzhu established a clear lead early in the game by taking out three Samsung players—with two of the kills going in favor of Longzhu’s ADC, Kim “PraY” Jong-in.

Using their lead to take the tier one bot lane turret, Longzhu used their momentum to push their vision control into Samsung’s jungle. Samsung, unaware of these wards, walked straight into Longzhu’s trap, losing three players across the map.

Longzhu used their man advantage to easily take a Baron, and pushed straight into Samsung’s base. Samsung managed to defend their turrets for a while, but eventually fell to an amazing engage from Longzhu’s support, Kang “GorillA” Beom-hyeon.

Game two saw Longzhu try to replicate their previous bot lane lead, but this time, they were unsuccessful. Samsung’s mid laner, Lee “Crown” Min-ho, was quick to roam and foiled Longzhu’s attempt at an early bot lane gank, earning a return kill for himself.

Although they looked good for the early part of the game, it was Samsung’s hubris that led to their eventual downfall. In an attempt to start a very early Baron after seeing Longzhu’s duo kill Lee “CuVee” Seong-jin, Samsung were almost aced. Samsung then lost the next teamfight and were forced to give up the Baron and any momentum they had.

Longzhu used this Baron to take turrets and gain complete vision control. Even after Longzhu’s Baron had worn off, Samsung were forced to cede later objectives due to their lack of vision. These later objectives snowballed Longzhu into a clean victory.

As the LCK’s new first-place team, Longzhu are directly seeded into the Summer Split finals. Although Longzhu won’t play until Aug. 26, the LCK playoffs will begin on Aug. 11, with Afreeca Freecs taking on SK Telecom T1.