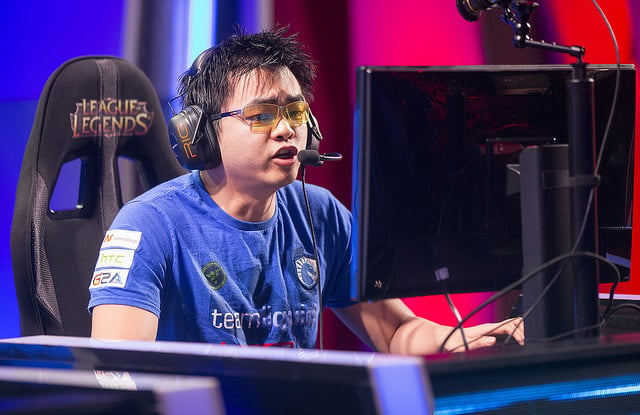 In game, a coach is responsible for organizing a team’s communication and making sure that they are being as efficient as possible with their words. As the foundation of the strategic aspects of a team, I believe every coach needs to take charge and mold how the team talks. The call-outs common to first person shooters like Counter-Strike are a prime example of efficient communication. Players learn the common call-outs in an effort to accurately convey locations in as few syllables as possible. This line of thinking should extend to all games. Extra syllables are wasted effort and wasted time on the part of whoever is talking in game. Whether it is a role player providing information about an opponent or a shotcaller dictating action to the rest of their team; they need to express exact details in a short period of time. As Spencer “Hiko” Martin of Counter-Strike fame noted in his blog post following ESWC Montreal, the team that he was substituting for used what appeared to be a numerical system to divide sections of the map into small parts, making every call extremely accurate.

Whether an organization has own its system or a coach brings in their own shotcalling setup, it is the role of the coach to drill exact terms into players heads so that there is never any confusion on the location or intentions of enemies. Drake or Drag, it doesn’t matter which word a team uses, as long as players understand exactly what is being identified by the term. Each area of the map should theoretically have an identifying word, or combination of words, that refers to that exact place and nowhere else on the map. While this is not of absolute importance in League of Legends because of the Ping system, it applies to other games concretely and it does not hinder a League team to communicate in such a manner. So for example, instead of just saying an enemy is “in bottom brush,” it would be better to say which part of the brush exactly. So for example “bot 1st brush, bot 2nd brush” and so on. These terms should be independent of map side, so on blue side, “bot 1st brush” would be the nearest to the tower, whereas on red side it would be “bot 2nd brush.” Doing this instead of just saying “bot brush” prevents any chance of confusion on the part of players. Again, not explicitly needed in League but conceptually applies to all games. By instituting a precise system of communications, there is also an organizational bar for improvement by players. Newly brought on Solo-queue players can be coached up on the terminology that the team uses, giving a concrete example of coaching. This way, teams are not at the whim of which players they recruit happen to be communicative, and instead can mold players into what they desire.

How To Get There

The other in-game aspect of communication that a coach can improve, is by forcing players to talk throughout the game. While I’m sure that some coaches pursue this approach, I have seen many teams vexed by their players not having a natural inclination towards talking while playing. Many players use up too much of their mental faculties in the actual playing of the game, leading to long lulls in communication while they are trading in lane or CS’ing; and then a large burst of words once they have relaxed. While this approach can convey accurate information, it does not arrive in a timely manner for teammates to be able to respond themselves.  But like any skill, this can be improved upon with work. Like learning to sing while playing a guitar, much of it comes down to hours and hours of practice doing each until they are both second nature. A coach can obviously sit in on scrims, and I believe that in those scrims a coach should be working on each player to make sure they are communicating accurately and often enough. This aspect of competitive play is also one of the few that can be improved while streaming. High level play is not necessary to work on the fundamentals and for many viewers it can be exciting to hear a player just verbalize their thoughts throughout the game. An easy way for a player to keep improving while not in scrims is to focus on narrating what they are doing, or trying to do, throughout games.

Shot-callers within a team work best with as much information available as possible, and so I also believe it best that players should be responsible for giving that information to the team, not just tasked with responding to the shot-callers questions. In Top Lane for example, your top should be routinely communicating some concoction of; the relative health of both members of the lane, how the minions are located currently and which way the lane will be pushing in the near future, when the power-spikes of both Top champions are going to occur, and when summoner spells are available. Not all of this information needs to be constantly fed to the team, but it is all relevant and should be stated as appropriate. Verbalizing when summoner spells are down helps any teammate attempting to gank Top lane, as well as informing actions that can be taken if the enemy Top Laner decides to gank someone else. Alternatively, describing the general shape of the lane and how minions are pushing also allows informed decisions about plays relative to the summoner spell Teleport for your team. This information is always important for your team to have, so stating that “enemy teleport up” multiple times before they actually use the Summoner Spell is far from a waste. A coach should look over the way their team is communicating throughout scrims and use that time to ask questions mid-game that reinforce the habit of players talking. Any player, no matter the position, simply not talking for an extended period of time (say, two minutes, though it can vary) is to the disadvantage of the team as a whole. Through repetition of these fundamentals, a coach can work with their players to ensure a well oiled team that is communicating both efficiently and often throughout a game.

(A player not known for verbosity, Quas still needs to relay info to Team Liquid)

The last in-game aspect I want to address is a personal belief that team’s communication should always be geared towards winning the game. While it sounds straight forward that this would be the case, we have all played games that have devolved into mud-flinging as the game goes on. Just because a team is organized and not in Solo-queue doesn’t mean that this won’t happen as well. As a coach you are in charge of keeping the team under control, and part of this involves keeping your team from eating itself alive under pressure. You will probably not be able to completely erase all bad tendencies, but I believe it can do a world of good for a team if you are able to coax players into keeping complaints for after the game. After the game, a coach can deflect blame onto themselves and help their team work towards a solution; but if arguments consistently break out in game then you won’t be able to do much. Just teaching players to say “Coach!” as a way of ending mid-game disagreements and leaving it for VOD review is enough. Thus I believe a small but important part of coaching is imparting the mindset that all communication in game is focused on winning that game at hand; and improving play doesn’t happen on game day so that talk should be kept separate.


That about wraps it up and I hope that any reader gained some knowledge on how to effectively communicate in game and further refinements can be made going forward based on discussions I bring up. Special thanks to @TiberiusAudley for a long discussion on in-game communication and sharing great links on the subject. .