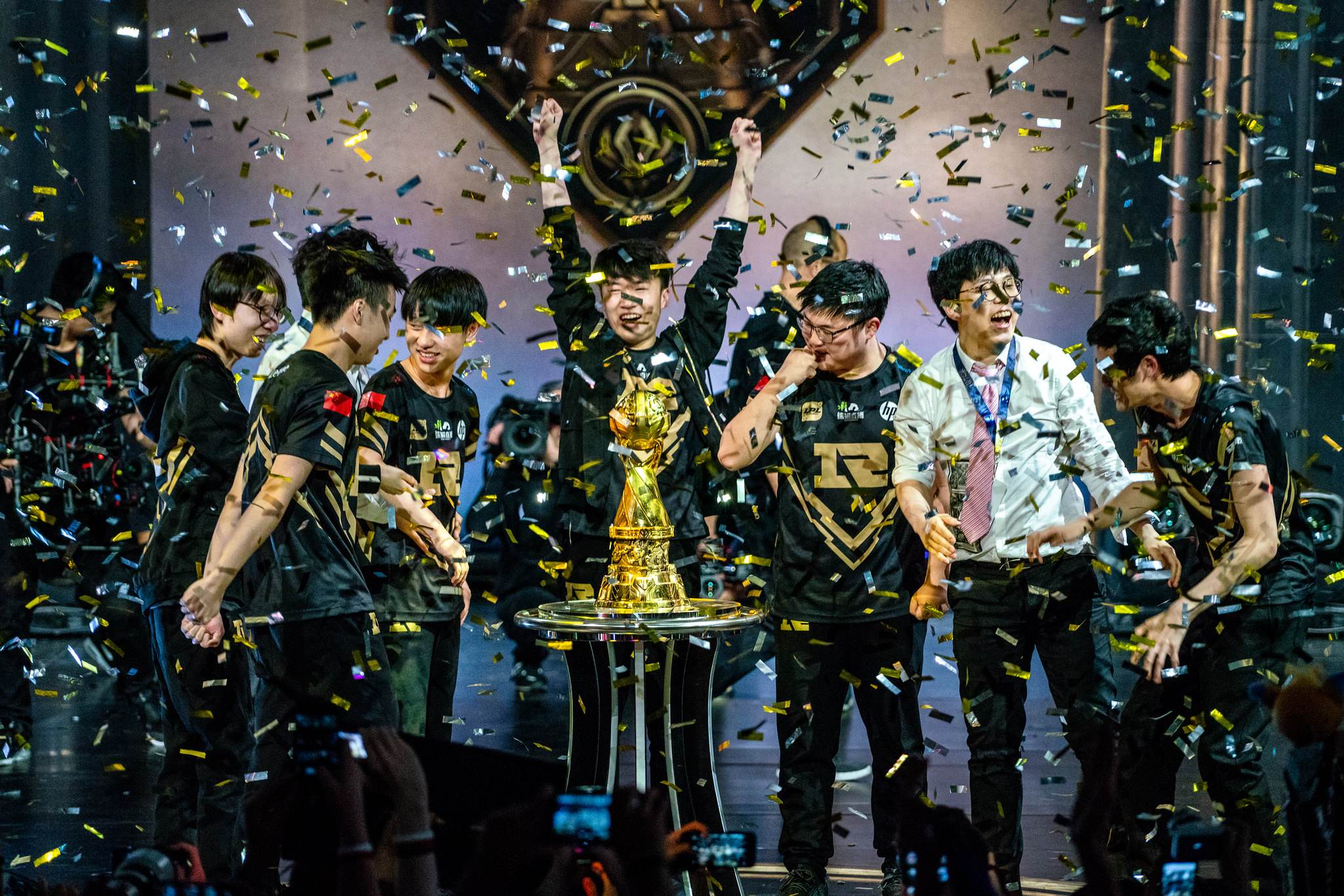 Since G2 Esports confirmed the addition of Rekkles to its League of Legends roster last month, the buzzword for 2021 has been “superteam.” This G2 lineup might be one of the strongest of all time and could potentially help the org get the Worlds title it’s been chasing since 2019. But what does it really mean to be a superteam?

Superteam is a nebulous term. There have been so-called superteams that failed and incredibly strong squads that haven’t necessarily been considered superteams. A superteam is one that’s been built for the sole purpose of being the very best, cherry-picked for international dominance, whether that be enabling a single, crucial player or acquiring world-class competitors across the map.

We analyzed some of the greatest superteams in League esports history and looked at how their history could foretell G2’s future.

Forming a superteam doesn’t always result in success. In 2014, Alliance became the first non-Fnatic team to win a split of the EU LCS, securing Europe’s first seed at the 2014 World Championship group stage in Singapore. After a third-place finish in their group, including a surprising loss to KaBuM! Esports from the CBLoL, however, the organization decided some changes needed to be made.

Those changes came to the bottom lane with the team acquiring Fnatic’s superstar AD carry Rekkles. This signing was the cherry on top for what was supposedly one of the strongest rosters in Europe—the team that had beaten Fnatic but this time with the addition of arguably Fnatic’s best player. This was one of the first real examples of a team having the strongest player in every single role—Europe’s first superteam.

But even the best-laid plans can sometimes go awry. A change in branding at the beginning of 2015 meant Alliance was now Elements—and the name change brought nothing but bad luck for the roster. The team was plagued with roster swaps and terrible performances, with two seventh-place finishes securing their spot in subsequent splits but barring them from the EU LCS playoffs.

It’d be ridiculous to discuss the concept of superteams without mentioning the most successful team of all time. SKT T1 is by far the most successful organization to grace the world of competitive League. Six regional titles, three world championships, and two MSI titles make them one of the most decorated teams in League history and the home of the most iconic players in the esport.

Chances are that even people who know nothing about League will have heard the name Faker before. He’s the figurehead of the esport across the world and was present for all of SKT’s titles throughout their reign of dominance both domestically and internationally. He’s also, coincidentally, the nucleus around which all of SKT’s championship lineups were created.

The key to this SKT superteam was enabling Faker. Bang and Wolf were brought in from SKT T2, following the implementation of a rule banning sister teams in the Korean competitive scene, as a safe and reliable bottom lane that could show dominance in the early game without risking their lives. Duke was a tank player through and through and played weak side top lane to allow jungler Bengi to focus all his attention on creating space for Faker to work his magic.

Royal Never Give Up’s 2018 roster is widely considered one of the greatest teams to never win Worlds. In the year leading up to 2018’s World Championship, all eyes were on the LPL after RNG took down Korean favorites Kingzone DragonX in a dominant 3-1 final at MSI. It was the first MSI victory for the LPL since 2015 when Edward Gaming made their miracle run, beating out world champions SKT T1 in a nail-biting five-game final.

Part of the reason the world had so much confidence in this RNG roster was that it operated on the same fundamental principles as the SKT squad that changed the face of competitive League only a few years prior: a supportive jungler, strong laners capable of playing a self-sufficient style, and a single hard carry around which the team could unite. This time, however, that carry was in the marksman role. And boy, was he terrifying.

Uzi is widely considered the greatest ADC to ever play League. This RNG roster was designed with the single purpose of enabling his teamfighting power, something that became evident in champion select throughout Worlds, with mid laner Xiaohu’s most popular champions being Lissandra, Ryze, and Galio—supportive picks with heavy crowd control to create space for Uzi to work his magic.

If the meta had been different, maybe RNG could have won a championship. But one of the critical problems with indexing all your carry potential onto a single player is that the meta in League is a slippery beast and sometimes that role just isn’t good enough to carry. This was the case for RNG. Nerfs to critical strike items earlier in the year meant that hyper-carry marksmen like Sivir and Tristana simply weren’t viable. The meta had shifted to reward solo lane dominance, something RNG sorely lacked, and no amount of clever positioning in teamfights could make up for the lack of damage in the marksman role.

RNG is a unique example of indexing on the wrong kind of power to make a superteam. ADC is a famously volatile role, and although Uzi is by far one of the best, he simply can’t make his champions do more damage or survive a one-shot combo from a fed Irelia. The RNG project failed and Uzi was left bereft of the Worlds title he’d been chasing his whole career.

G2’s 2019 roster is, without a doubt, the most successful team that Europe has ever produced. That success all came from a single, surprising move in the offseason: the acquisition of superstar mid laner Caps from Fnatic and the swap of veteran Perkz to the ADC role.

The move was, at first, considered extremely controversial. Role swaps were rarely successful and many thought G2 was throwing away one of the most talented mid laners Europe had ever seen for the sake of shortsightedness. Many pundits were also surprised at Caps’ decision to depart from a roster that had achieved Europe’s first Worlds final since season one, although Caps went on to explain that he left the team because he “couldn’t see that we would win Worlds.” If there was one thing that this G2 roster was built for, it was to do what Fnatic couldn’t in 2018. The pieces had fallen into place and G2 arguably had the best European players in four out of five roles.

At first, this G2 roster looked to be one of the best-performing superteams of all time. They were unstoppable, winning every single event they participated in, including an MSI trophy that marked Europe’s first non-Rift Rivals international victory since 2011. The key to this superteam was their flexibility. The strength of their individual players meant anyone could play anything, and their incredible laning power made up for their sometimes sloppy cohesion in teamfights. They brought out weird pick after weird pick: Morgana jungle, Pyke top, Xayah/Rakan funnel in the mid lane. If a champion was playable, chances were G2 could make it work in any role on the map.

Their downfall came at the 2019 World Championship, though, where they met their perfect counter in FunPlus Phoenix. This roster had always relied on its ability to dominate in lane, more specifically in the mid lane. But you can’t beat your lane opponent if they’re never there. DoinB’s signature style of “pick a tank and run top lane” combined with FPX’s superior teamfighting power allowed the Chinese squad to make quick work of G2 in yet another 3-0 Worlds final loss for Europe.

The issue with this team was that it indexed too heavily on individual power. It had the opposite problem of RNG’s 2018 roster. Rather than having the carry potential solely on one person’s shoulders, it allowed everyone to have the potential to carry. This meant, however, that teamfights felt scrappy and uncoordinated in the moments that mattered most because everyone was trying to win single-handedly rather than work cohesively to secure the victory.

The only superteam that’s ever met the world’s expectations of success was SKT and the magic of that roster came from their versatility. They weren’t as skilled at teamfighting as RNG and their lanes weren’t as dominant as G2’s. But they were able to combine the two elements in a way that has, as of yet, not been replicated.

That is until G2 announced the signing of Rekkles for the 2021 season.

G2’s 2021 roster may be one of the most powerful superteams the world has ever seen. G2 has finally acquired the best player in every role across the map. Although they lost Perkz’s in-game leadership, they gained Rekkles’ ability to play the weak side through superb wave management in lane.

Although this lineup is still unproven, it takes the term “superteam” to yet unseen heights. In terms of playstyle, G2’s roster should be reminiscent of that monstrous SKT lineup: a self-sufficient top laner, supportive jungler, dominant, mechanically skilled mid laner, and a bottom lane that can provide ridiculous amounts of late-game insurance.

The superteam experiment has often come back to bite the hand that feeds it, though. League fans will have to wait until 2021 to see if G2’s ultimate gamble will pay off.