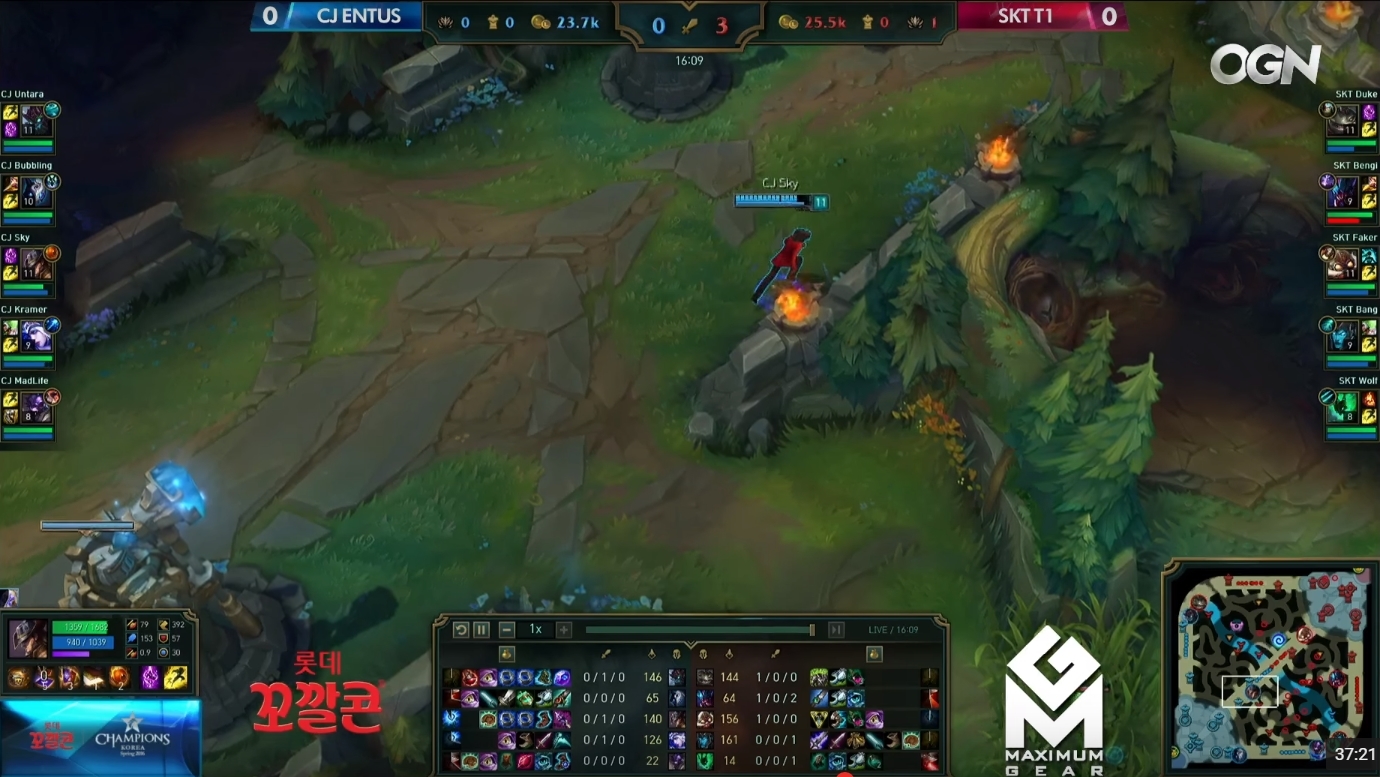 SK Telecom T1, who have won most of the prizes there are to win in competitive League of Legends, did not win the offseason. A defeat to Ever in the KeSPA Cup was a surprise, and losing the MVP of the 2015 World Championship, Jang “MaRin” Gyeong-Hwan, to LGD Gaming was unexpected. However, in their first game of the 2016 LCK, it was hard to tell anything had changed. This was still the same, dominant team that are the reigning world champions, and they often made things look easy in their 2-0 season-opening victory over the revamped CJ Entus.

CJ had many new faces debuting, with four new players joining long-time support Hong “MadLife” Min-gi. An early question for these players was how they would deal with the pressure of facing the champions, and when jungler Park “Bubbling” Jun-hyeong made a positioning error to give up the game’s first kill to SKT jungler Bae “Bengi” Seong-woong, it was the first sign of the lesson the young players were about to be taught.

In the bottom lane, new CJ AD carry Ha “Kramer” Jong-hu, formerly of Taiwanese side Flash Wolves, struggled to make an impact and quickly gave up a sizable lead in farm to SKT’s Bae “Bang” Jun-sik. Faker and Sky remained relatively even in the mid lane, but Faker’s pressure in trades with Sky forced him to use his teleport exclusively to return to lane after being poked out, taking away some of the global presence and pressure CJ wanted to work with.

With two lanes even or losing, CJ had to look for a play, and ten minutes into the game sent Sky and Bubbling to the bottom lane looking for a kill. However, SKT successfully disengaged with very little trouble. In another sign of potential on-stage jitters, Sky used Destiny to teleport to the bottom lane, but the Pick-a-Card he had ready was set to slow, not stun. This failed play just allowed SKT to exert more pressure across the map, and Faker’s Special Delivery in combination with Bengi shortly afterwards allowed SKT to pick up another kill, this time on Sky.

A theme of this game (and many of SKT’s games) was SKT’s total dominance of vision. Look at the screenshot below, sixteen minutes into game 1.

The bottom side of CJ’s jungle is covered in wards and tunnels from Bengi’s Rek’sai. CJ have a total of one ward visible on the map. SKT’s control of vision was this complete before a single turret fell in the game, let alone when the turrets started to go down.

Speaking of which, CJ made another attempt at a play in the bottom lane and successfully got a kill on Bang, their first kill of the game. The problem was, they once again committed four of their five players to the attempt, and while Bengi and support Lee “Wolf” Jae-wan stalled SKT’s attempts to take the outer bottom lane turret, Faker took CJ’s outer turret in mid lane, then rotated top to help top laner Lee “Duke” Ho-seong take the outer turret in top lane. CJ got one kill, but failed to capitalize any further while SKT significantly increased their control of the map.

Even when it looked like an SKT play was doomed to fail. The first big fight of the game started when Faker jumped directly onto MadLife, was Pulverized into the air and looked completely dead to rights. However, as both teams collapsed on the fight and both top laners teleported down, it became clear that CJ simply did not have the damage to win the fight. One by one, the CJ members were tracked down and killed, with Kramer the last to die under his turret as SKT finished a clean 5-0 fight and pushed their gold lead past seven thousand only twenty minutes into the game.

An attempt at Baron by SKT led to two more kills as CJ were forced to stop them, but CJ did enough damage to force SKT away. This allowed CJ to finally take SKT’s outer mid turret, their first turret of the game. However, the respite was brief, and another aggressive play from SKT led to the game’s second big fight. Bengi aggressively dove into the jungle trying to catch Bubbling, but found the rest of CJ’s team instead. Here, Bengi is stunned by Twisted Fate, and MadLife’s Alistar prevents Bengi from escaping on the Dark Passage lantern from Wolf. CJ have four of their five members ready to fight, with the fifth, top laner Park “Untara” Ui-jin in the bottom lane ready to Teleport, while SKT are still missing Faker (in the middle lane, on his way with Special Delivery ready) and Duke (also bottom lane, ready to teleport in with Abyssal Voyage). CJ do everything they can to burst down Bengi, but… Bengi manages to escape with a sliver of health, and now Faker has arrived, perfectly positioned to deal tons of damage from the right side. Bang, at the top of the fight, is also not in danger of taking too much damage. As SKT begin to turn the fight, Faker finally uses the Special Delivery. Bubbling and Sky are trapped between Wolf and Faker (off the screen to the left) on the burning ground of Special Delivery. MadLife is completely out of the fight, unable to impede any of SKT’s damage dealers after flashing over the wall. Bang is still completely free-hitting anyone he wants to from the backside of the fight. SKT have turned CJ’s initiation completely against them. However, Bubbling still has Lamb’s Respite to prevent as much death as possible… …but even the healing that will come from that, with (now) three members sitting on that Special Delivery burn, will not save them from the bursts of damage that Faker, still at full health on the left side, and Bang, auto-attacking the whole time and able to Rend as soon as Lamb’s Respite is over, can provide. Wolf escapes by flashing over the wall, the four CJ targets die almost immediately after the end, and SKT chases down Kramer for another perfect 5-0 fight.

From that point on, the finish was clinical. SKT took Baron, pushed down each of the three lanes in turn, and took the base to open the series 1-0. Faker finished the game 9-0-9. CJ got a total of one kill, one turret and no dragons to SKT’s 22 kills, all 11 turrets and two dragons, a nearly perfect performance.

The second game had a very different feel to it. CJ chose to ban Tahm Kench, which allowed SKT to take Miss Fortune for Bang, adding Gnar, Elise, Viktor and Trundle, while CJ chose to keep mostly the same composition, replacing Ashe with Lucian and Twisted Fate with Leblanc. SKT’s new composition was much more focused around a massive team fight combo using the ultimates of Gnar, Viktor and Miss Fortune.

In this game, SKT showed some gaps in their armor. Bubbling successfully invaded Bengi at his blue buff and killed him for the first kill of the game, and was in general much more active on the map than he had been in the first game. An attempted four-man dive from SKT turned into two kills for CJ thanks to a good teleport from Untara. Another teleport by Untara led to a dive and an extended fight, which gave CJ four kills and a little more than a two thousand gold lead.

However, CJ could not transition their lead in kills into anything more. Not a single turret fell in this game until Duke took CJ’s top outer turret more than 22 minutes in, with SKT’s bottom outer falling shortly thereafter. By 22 minutes in game 1, SKT led by eight thousand gold and had already tried to take Baron once. A key moment in this game came when CJ tried to force down SKT’s mid outer turret with another teleport from Untara. Untara’s teleport catches SKT a bit off guard, and the homeguard effect should allow the Maokai to get right at the key targets of Viktor and Miss Fortune, and while Duke has teleport available, the hope is for the fight to be sorted before he can even get there. Untara’s teleport finishes and… …he runs straight into Trundle’s Pillar of (Filth) Ice. MadLife, after trying to help initiate, is already significantly low on health after a rotation of spells from Faker, and SKT are in almost no danger. From this disengage, not only can SKT push up and take a turret themselves, Duke, who never left the bottom lane, can take the outer turret there as well, and suddenly SKT have a gold lead out of the effects of a simple disengage.

From there, SKT executed beautifully with vision and map control. Again, look at the vision control SKT have, this time shortly after the teleport fight and disengage. CJ, while they have a few wards on the map, have scattered vision, with a few wards in typical locations. SKT have carefully focused vision around the top side of CJ’s jungle, where their entire team is headed to put pressure on that inner turret. Not only is SKT’s vision control better overall, but it is very focused around their next objective.

SKT, though, chose to take their time and play carefully with their small advantage, content to keep pressure on as many lanes as they could. When they saw an opportunity to strike when Sky went to farm the top lane, they immediately pushed down the mid lane and pushed the inner turret, with Kramer helpless to stop. CJ took that opportunity to engage and they almost, almost got everything.

A full Leblanc rotation did everything but one-hit Faker’s Viktor, but a combination of a well-timed Face of the Mountain shield from Wolf and the shield from Viktor’s Syphon Power just barely let him live, and then with CJ over-committing to finishing him, SKT simply cleaned up three kills. Those three kills led to Baron, which led to four turrets and two inhibitors dying for SKT. The end came swiftly for CJ from there, and SKT finished the 2-0 series win.

Faker, deservedly, received the MVP awards for both games. He once again did not die in the second game, with a combined score of 15-0-15 across the two games. The Viktor was his most-played champion from the summer season, and it had no signs of rust. Duke’s integration into the main SKT roster looks as smooth as it could be to start, with smart teleport plays and map rotation to go with his mechanical skill. His Tahm Kench in the first game was great.

There has been lots of talk about the potential ceilings of some of the new and revamped squads in South Korea, including ROX Tigers, Worlds finalists in their own right; Longzhu, with their serious new investments; and KT Rolster, who joined SKT in winning their first game of the season. However, based on their first showing, the champions have no intention of letting their crown go any time soon.