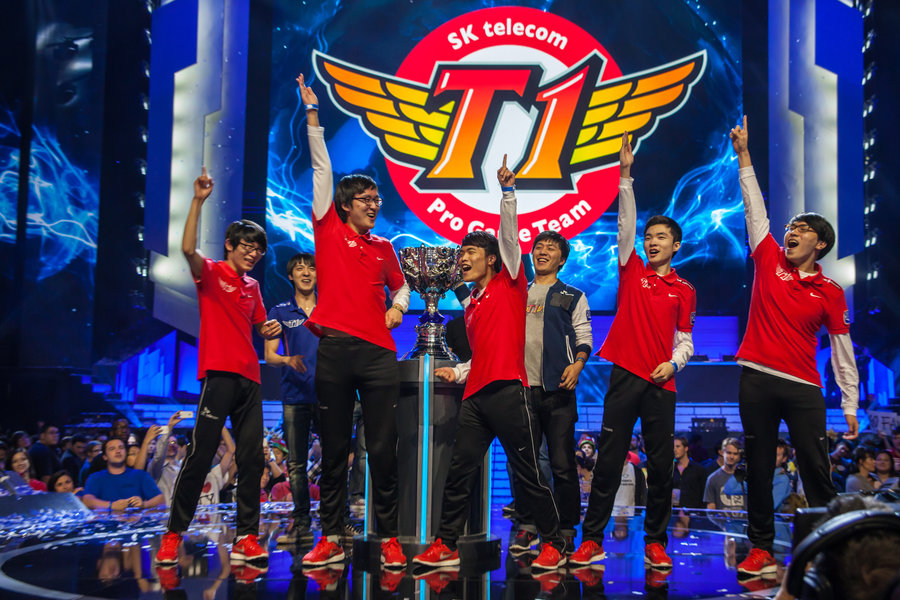 On October 19th of last year, The Season 4 League of Legends World Championship had crowned yet another Korean champion, Samsung White, who’s merciless domination of the competition had left audiences awestruck at the extent of Korea’s grasp on the game. To the great dismay of Western teams and fans, they had once again fallen short at bridging the gap between themselves and the Koreans. Shortly after, motivated by foreign money, many of Korea’s most elite players left the very region that had helped them achieve greatness to compete in North America, Europe, and most notably, China’s LPL. The absence of names like Dade, Piglet, and Spirit from the LCK, as well as the entirety of Samsung White’s famed roster, left critics wondering if the loss of the region’s most celebrated and talented players would forever cripple League of Legends in Korea. Even more, foreign scouts had recruited many of Korea’s Solo-Q talent including the Korean ladder’s number one ranked player, Rush. “The Great Exodus” as it is satirically referred to by many in the League community was a crushing blow to Korean fans and organizations. What was sure to be a great test for the Korean League scene, left fans wondering if they would be able to fill the massive void in player talent.  The events of last year’s offseason left people with one question, had Korea’s dominance of the international League scene finally come to an end? On Saturday October 31st, for the first time in League of Legends competitive history, two teams from the same region will compete against one another in the Season 5 League of Legends World Championship. The region that these two great teams originate? Why of course, Korea.

As it turns out, and as many League analysts and cognoscenti predicted, importing Korean players is only a temporary and relatively ineffective fix to systemic issues that can only be resolved through growth over time. Korea’s convincing reassertion of themselves as the world’s top region at this year’s World Championship made it clear that the expertly developed Esports infrastructure in Korea is paralleled by none other. Home grown talent, a phrase used often in the Esports world but found seldom in the western regions of North America and Europe, is absolutely essential to regional development. Simply put, the gaming climate of western regions is just not the same. Not only do the amount of players who participate in ranked Solo-Q in Korea vastly outnumber those of North America and Europe, but they take their practice on the Korean server infinitely more seriously. Unless foreign regions can find a way to facilitate a more positive practice environment, the development of domestic talent will continue to be hindered. It would be foolish to credit Korean success simply on infrastructural differences, they have had the luxury of one thing no other region has had, time. In 1999, Esports debuted on television in South Korea, 16 years later, on western television networks, the appearance of Esports is still perceived as a novel occurrence. Instead, the western Esports community has retreated to alternate and more niche outlets such as Twitch TV, further driving western Esports away from the mainstream. In Korea, Esports wields a legitimacy that is simply unseen elsewhere. Esports’ meteoric rise to the national stage in South Korea resulted in the rapid influx of corporate sponsors and money into the Korean Esports scene. This money was subsequently utilized in further developing infrastructure and talent. In Korea, Esports was conceived, and there, it thrives. The intuitive and cleverly engineered infrastructure that exists within Korean organizations as a result of over a decade of development is far superior to that of any other region. Within Korean gaming organizations, the lives of players are highly regimented. Everything down to the last detail has been ironed out, what they eat, when they sleep, what they dedicate their focus towards within the game, and so forth. This sort of forethought is found seldom in western Esports and is one of the reasons Korean teams continue to prevail.

This may seem like a bold statement, but i think that Korean’s and Korea as a country would dominate any Esports game. -Duncan “Thorin” Shields

A Nation of  Fierce Competitors

Infrastructure and history aside, there is one essential element to Korean Esports glory that cannot be discounted, culture. In the West, Esports is a vibrant subculture filled with dedicated fans and industry leaders working hard to bring Esports in to the mainstream and public eye. In Korea however, where successful Esports stars are household names, and where the nation’s most large and prestigious companies make efforts to modernize their brand through the sponsorship of Esports organizations, the undivided attention of the public eye has already been achieved. In South Korea, gaming is not just a fad for disillusioned teens looking to shirk the responsibilities of student life, it is a national pastime. The national dedication to Esports glory is prevalent, and the internal culture of Korean Esports teams is one of fierce competition and dedication. Furthermore, hand in hand with the nature of Korean gaming culture, is the Korean mentality. In Korea, children are not extended the luxury of a carefree education. The moment a Korean student begins their education, they are subjected to a ranking system and are immediately pitted against their peers. As one would assume, the mentality and national work ethic created by such a culture translates directly to Esports. When you hear Western teams boast their 10 hour a day practice regiments, you can be sure as hell that the Korean’s are practicing 16. In Korea, the difference between winning and losing championships is not gaining two corporate sponsors instead of five, it is life and death. Koreans understand that the unglamorous nature of the gaming lifestyle is a small price to pay,  they accept having to sleep in bunkbeds in rooms of four people, they understand the ungodly hours they have to dedicate to understanding the intricacies and nuances of the game, because all of these sacrifices only bring them closer to one thing, victory.

Its also cultural, because sports has been in korea and is established there and league of legends is this hot game at the moment in korea. So, more people by percentage have like this fantasy of becoming pro gamers so solo q is taken extremely seriously in Korea where as it can get kind of trolly in NA. – Christopher “Montecristo” Mykles

The Locus of Esports

Seoul, the birthplace of Esports, the hub for ingenuity in the Esports world, and where Korea’s Esports glory is centered. Home to over 20% of the Korean population, Seoul is the hub for anything and everything Esports. Korean players have the luxury of their entire world being centered around one relatively small area, where all of Korean Esports is interconnected. Even more, In Seoul, the average ping of 7 is roughly 1/10 of the average ping in Los Angeles, the home of North America’s LCS. Not only are players able to train in a low ping environment, but are highly benefited by the cohesive nature of Seoul’s gaming community which bolsters the ability of teams to recruit and develop talent. William “Scarra” Li, former Mid Laner for team Dignitas and former coach of Counter Logic Gaming summarizes the Korean’s geographic and general advantages well…

In Korea they just have a lot of benefits to be able to find and nurture talent – like ok, their internet’s better, geographically it’s better for them as well, but you don’t join a Challenger team in Korea, what you do is you just climb the soloQ ladder and if you get good enough you get noticed by some of the players, teams like SKT will give you an invite, they’ll be like ok, well you have an interview, and if you pass the first step of the interview process they will invite you to their team house so that you can practice with them. Or like you can do 1v1s so they can see you in person and see how you perform, and that’s only possible because 95% of the player base, 90% of the Korean player base lives in one city – Seoul. Not only is that incredibly wild, you can get anywhere with the subway, so let’s say I went to do that, where 50% of the Challenger ladder lives in Southern California. I would have to be paying hell of a lot more because I can’t – subway rides in Korea are really cheap, whereas if I wanted to taxi people all the way to the Dig house, the CLG house, it’d cost me like 100$ each way, and it’s just so much more convenient for them to be like ok, just take a 30 minute subway ride and then get off at this stop and then come by our house, and we’ll see how you do. Where in LA I can really not do that, even though I would really really want to.

So that’s the benefits of geographically I feel like they have a lot of benefits from having so many people play the game in such a small area that’s really really well connected in terms of internet. They have history and years of experience of how to coach esports, so they are really far ahead of the curve in terms of that, whereas first generation coaches like me have to learn everything from the ground up, so a lot of the mistakes that I make are stuff that new coaches won’t make because it’s really obvious, it’s like oh you just shouldn’t do that, or like oh, the solution to that is just this, whereas I had to learn from my trial and error.

Wealthy western Esports organizations such as Counter Logic Gaming and Fnatic have made great strides in team development through the appointment of older and more traditional coaches. Interestingly yet unsurprisingly, moves such as these have proven tremendously successful, both teams winning their respective regions. However, the existence of such coaching infrastructure in Korea far outdates that of North America and Europe. Across the Pacific, a well developed clockwork ticks away, producing one championship after the next. South Korea’s infrastructure, culture, and geographic advantages continue to give them the upper hand in international competition. Yet, there is no doubt that the west has continued to make great strides in emulating Korea’s gaming culture and strengthening themselves as regions, having two European teams place in the top four at the World Championship’s this year. This, undoubtedly, is an incredibly impressive feat. At the same time, we are also witnessing our first ever all Korean final. Unfortunately, in North America and Europe, there is still work to be done. Only recently have western organizations begun to discover the benefits of increased regulation of the team environment. Beyond this, the persistent drama and lack of player cohesion that is prevalent in western organizations is even more detrimental to the growth of the western scene. The scandal and internal turmoil that plagues western organizations is one of the many growing pains we will have to endure on our quest to achieve Esports greatness. In order for this greatness to be achieved, we must understand that unless we attempt to patiently grow the western Esports scene from it’s grassroots, we will never be able to entertain the success the Koreans do today. For us to achieve the glory we so profoundly desire, it must be our own.