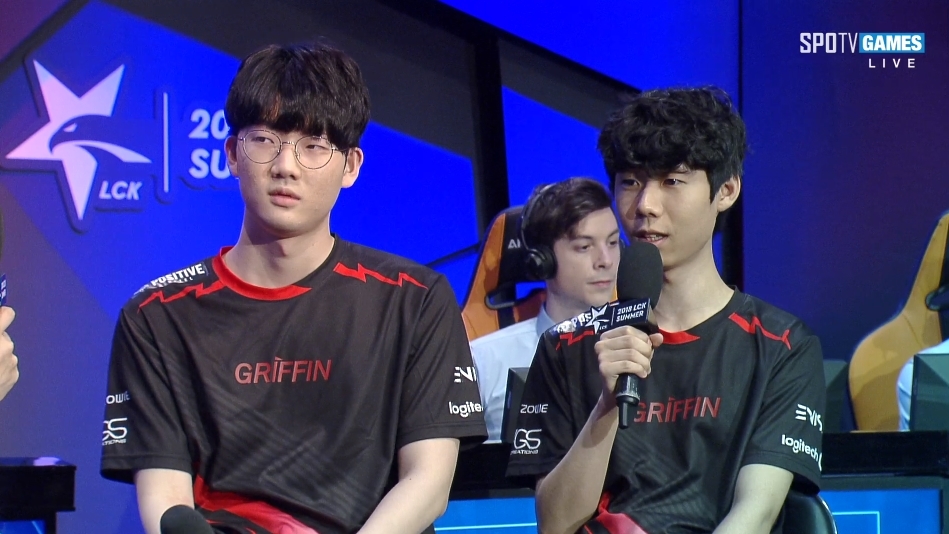 Today’s opening match featured two teams on completely different sides of the LCK spectrum. To the left was the rookie squad Griffin, who entered the Nexon Arena today with an undefeated record this split thus far. On the right were LCK veterans SKT—though unlike Griffin they had yet to find even a single match win in summer. Today marked the return of SKT’s main roster, who were suddenly benched last Wednesday in the team’s loss to MVP.

Fans were eager to see what mid laner Lee “Faker” Sang-hyeok would unveil after a week away from professional play. Faker did not disappoint, starting the series on a fan favorite champion—Yasuo.

To combat Faker’s Yasuo, Griffin drafted a gold funneling composition with Kai’Sa jungle and Braum mid lane. For most of game one, this idea from Griffin seemed to be the wrong choice. Faker’s Yasuo, in tandem with the knock up provided from SKT top laner Park “Thal” Kwon-hyuk’s Darius, destroyed early to mid game skirmishes and teamfights.

But with patient play, and some amazing disengages from support Son “Lehends” Si-woo, Griffin managed to survive until Kai’Sa and Dr. Mundo hit their respective power-spikes, and outscaled SKT’s champions. Seemingly unkillable by level 17, Dr. Mundo soaked up all the damage while Kai’Sa decimated SKT’s team with her now evolved abilities.

While he made some impressive support plays in the previous game, Lehends completely dominated game two as Shen. From his level one escape from SKT’s bot lane and jungler with only shadow dash, to his theft of the Infernal Drake which led to two kills for Griffin, Lehends performance in game two was extraordinary. SKT had no time to worry about Griffin’s scaling Aatrox and Master Yi, lest they found themselves the victims of Lehends’ Shen engages.