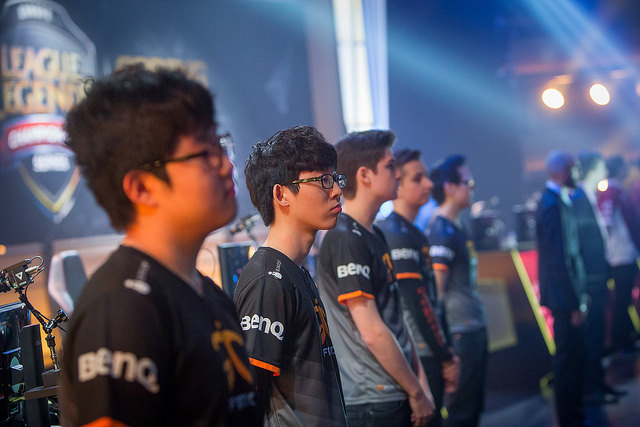 After a heartbreaking Sejuani bug possibly costing Fanatic a massive upset win over SK Telecom, what should have been the greatest game of the tournament so far instead leaves a bitter taste in our mouths. Riot officials emphasise that the players know the protocol for bugs and it was up to Fanatic to pause and demand a remake there and then. Fair enough, except Fanatic were in a terrible position. The game wasn’t over, they’d lost baron but managed to survive and their base was in tact. Assumedly Fanatic knew that this kind of game was unlikely to happen for them again, and so it’s understandable why they opted to play on. Unfortunately this led to a tower going down, a poor team fight and the end of the game.

My issue is not with the bug, they are going to happen – nor is it really with how the situation was handled. Instead it is with the entire protocol that happens when there is a bug. A remake causes an entirely different game. Playing on is damaging for competitive intergrity and always leaves the audience with a ‘what if?’ in the back of their minds. For me the obvious solution is a rewind option for proffessional player. Officials acknowledge the bug, confirm it and if it is indeed a bug they rewind to the point of the bug and the game continues from that point. Of course this takes new technology but is it really beyond the resources of Riot?

This technology could come hand in hand with a feature that the community has wanted for a long, long time. An inbuilt client replay system could be used to implement such a technology. Moreover, it would even open the possibility for a rewind in custom games letting pro teams scrim, rewind to team fights and practice a variety of scenarios. It would be a massive step for competitive league and a neat feature for the practice and enjoyment of the regular players. Of course this kind of system puts higher demands on the servers, so perhaps a newer optimised client would need to come first and the North America servers before that, but this should be the goal. Given the resource that Riot have however, there really should be no excuses for this being a not too distant future goal. It’s the best possible way to resolve such issues. .