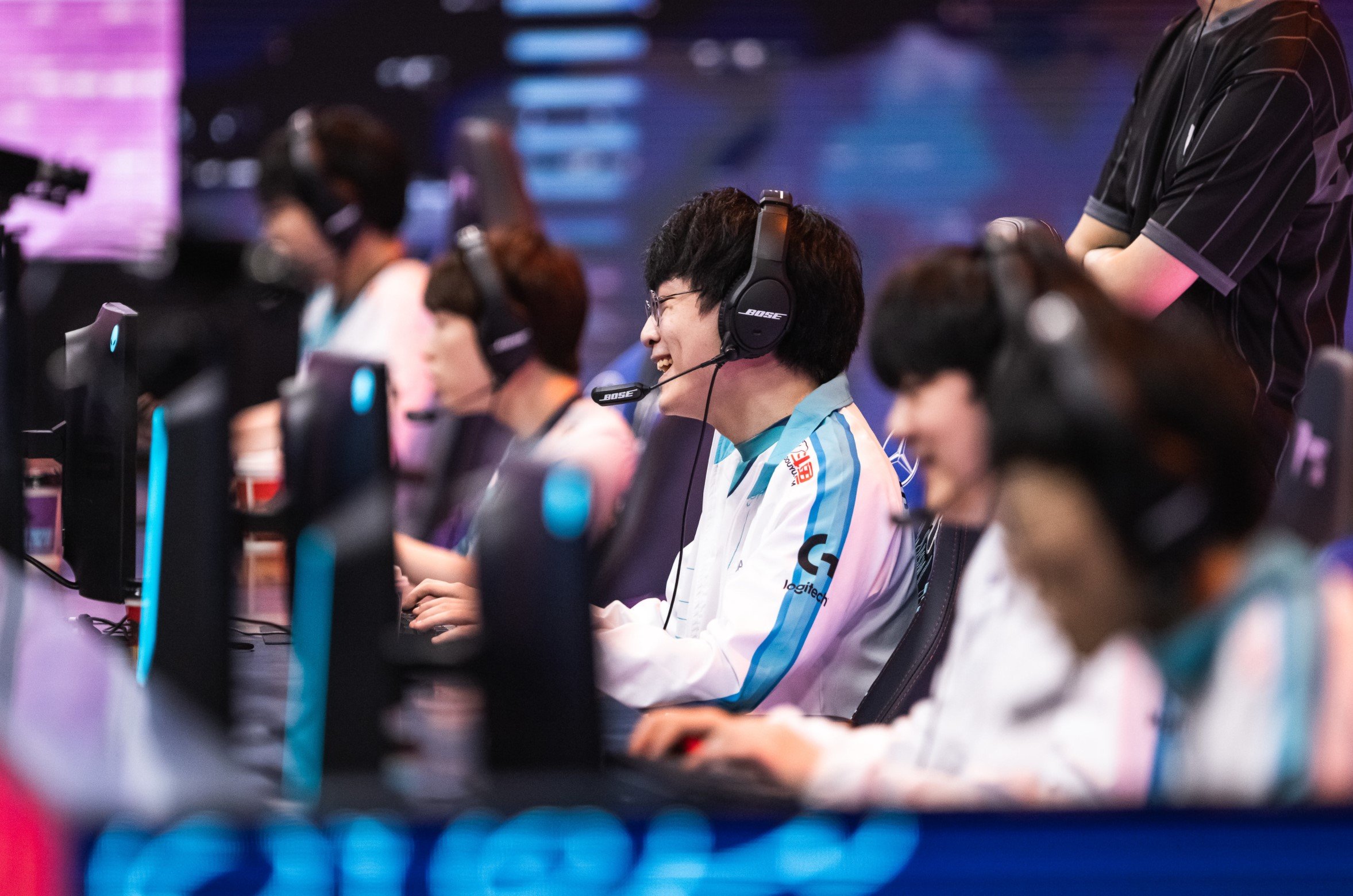 The knockout stage of the 2020 League of Legends World Championship kicks off tomorrow with DAMWON Gaming and DRX set to go head-to-head in the first matchup of the tournament’s quarterfinals. But in a unique contrast to the other quarterfinal matchups on the docket, the slated series between DRX and DWG showcases two teams with history, purpose, and unfinished business.

After meeting on several occasions throughout 2020, this final matchup of the year between two of the most storied squads in modern Korean League is sure to serve as the apex of one of the game’s most promising rivalries.

These teams met most recently at the beginning of last month when they fought for the LCK Summer Split title. DWG won that matchup—but more importantly, they won it convincingly. The series ended in dominant 3-0 fashion with DWG racking up 54 kills across the three contests. Additionally, the final two games of the series saw the eventual champion win by more than 11,000 gold.

Since then, both DWG and DRX have evolved immensely. While DWG seem even stronger in every regard, with each player looking more mechanically sound on the Worlds stage, DRX have made far-reaching improvements over the course of the last month as well.

In the six games that the team has played on the World Championship stage, DRX look more polished and crisp in their gameplay when compared to their time in the LCK. Seemingly overnight, the team has shifted its approach from brute-forcing its opponents down with an aggro-focused playstyle to instead taking a more precise mindset toward the game. At Worlds, players like Pyosik, Chovy, and Keria look more methodical and polished in their decision making—a stark difference from the white-hot playstyle that took DRX to Worlds in the first place.

Perhaps the most notable point of focus between DWG and DRX is the fact that these two teams couldn’t be further apart on the spectrum when it comes to experience at the World Championship.

Despite fielding a team with four players making their debut on the Worlds stage in 2020, the DRX roster is quickly coming into its own at the tournament. Spearheaded by the roster’s lone veteran, Deft, DRX are the prime example of a team with a “youth-first” philosophy. Even if the squad doesn’t advance to the semifinals this weekend, the developmental progress that the roster will receive could be priceless.

While DWG’s roster is largely made up of players who have all played at Worlds before, four out of five of DRX’s starters made their Worlds debut just last week. To say that this series will be a battle of experience and youth would be a massive understatement. For DRX, the pressure has never been higher. But for DWG, this best-of-five should merely be another day at the office.

Matchup to watch: ShowMaker vs. Chovy

If there’s any matchup to keep an eye on come Oct. 15, it’s going to be the mid lane showdown between ShowMaker and Chovy. The two Korean superstars have made incredible strides toward taking up the mantle at the top of the region’s mid lane tier list over the course of the past two years. And now, at Worlds 2020, the rivalry that’s been developing between the two of them is set to come to a head.

For the better part of the last two seasons, Chovy and ShowMaker have evolved from young, rising superstars into full-blown centerpieces of their respective organizations and the LCK as a whole. In the same way that names like PawN and Faker controlled the discussion surrounding Korean mid laners for the better part of the 2010s, it’d be reasonable to expect the same out of names like ShowMaker and Chovy throughout the 2020s.

And so far, especially in recent times, ShowMaker has gotten the better of his contemporary. Since the start of the summer split, ShowMaker has played eight total games against Chovy and DRX. During that span, he’s posted a total scoreline of 35/10/69, good enough for an average KDA of 10.4, according to League stats website, gol.gg.

On the other hand, when matched up against DWG this summer, Chovy posted a KDA of only 1.8. Additionally, ShowMaker posted a higher DPM than Chovy in all three series that the two squads played against each other over the course of the last split.

For DRX, those trends should be highly disturbing since the games that the team has won at Worlds have mostly been won through its mid laner. Chovy served as a focal point of DRX throughout the group stage, as well as most of the 2020 season. And if DRX are going to find continued success heading into the quarterfinals, they’ll need to first figure out how to get past the obstacle that is DWG.

Keep in mind, however, that DWG is a team that’s done such an amazing job throughout the regular season of completely erasing DRX’s star mid laner from the equation time and time again.

This best-of-five at Worlds will be the first meeting between Chovy and ShowMaker on the international stage, giving an incredible amount of leverage to the victor. Whichever player has the better performance tomorrow will most definitely take a massive step forward in the discussion surrounding this developing rivalry as well.

Since the beginning of 2020, DWG and DRX have faced off a total of six times, with DRX holding an advantage of four matches to two on the year. Still, all of DRX’s wins over DWG came in the first six months of the year. DWG won when it mattered most, locking up the LCK’s first seed at the end of the summer season with a 3-0 win over DRX in the finals.

Even beyond that point, though, the fact still stands that DRX have the potential to beat DWG. History shows that the squad has managed to do so before. All of the matches that the two teams competed in during the early portions of the year were relatively close. If DRX can ignite the spark that allowed them to beat DWG so many times early on in the season, we might have an incredibly different narrative on our hands tomorrow.

What’s concerning, though, is that DWG have gotten the edge on DRX in six out of the last seven individual games the teams have played against each other. While DRX and its roster of young-gun upstarts took DWG by surprise in the early portion of the year, it’s entirely possible that the last few months have showcased DWG’s ability to adapt to its competition. In that regard, DRX could just be another name on the list of teams that the overwhelming favorite in DWG could simply roll over en route to a world championship.

And if there’s any important mindset to have going into this series, it’s that although DRX certainly has the potential to pull off an upset, it should be remembered that DWG are looking like the odds-on favorite to bring home the Summoner’s Cup at the end of the month. Despite all of the chances for a DRX upset, it’s still imperative to remember that Worlds 2020 has looked like DWG’s tournament to lose ever since the team jumped out of the starting gate.

DWG will face off against DRX at 5am CT on Thursday, Oct. 15.