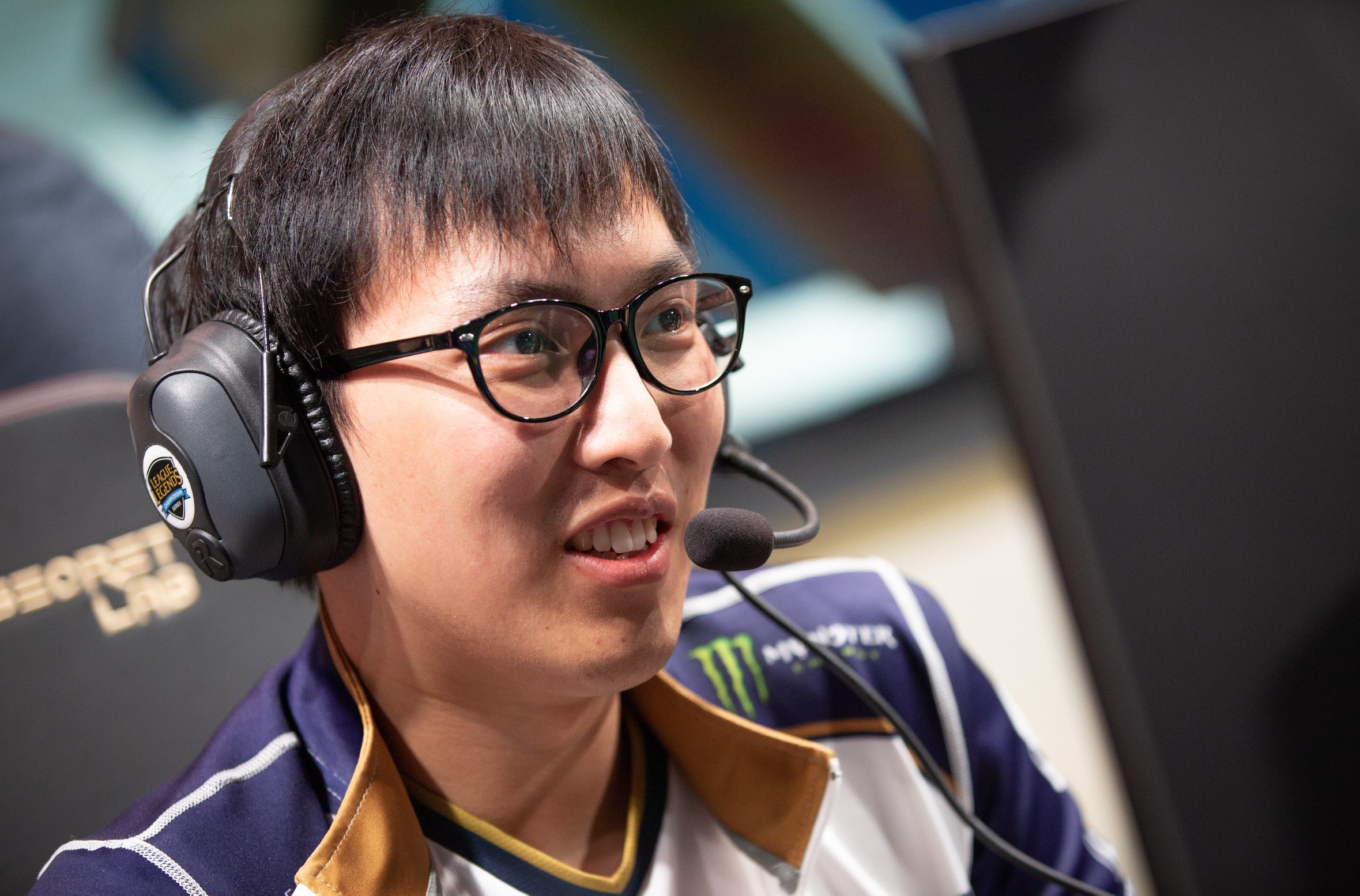 “LCS is dying. The viewership is absolutely dying,” former LCS pro player Doublelift said to his loyal audience of nearly 20,000 during a July 11 Twitch stream. “There’s no denying it. Everyone knows it. Everyone can feel it.” The comments, which came off the back of a highly successful League of Legends showmatch separate from the LCS, threw the league and Riot Games into a PR tailspin.

Those remarks likely would have fallen by the wayside as just another series of potshots at a successful multibillion-dollar company, but the League developer responded by temporarily suspending Doublelift from co-streaming LCS games for one week, a mere slap on the wrist. Since the LCS only allows co-streaming during “superweeks” and playoffs, Doublelift’s ban will go into effect during week eight of the LCS Summer Split.

And while it’s in the best interest of Riot to protect a brand as historic as the LCS, punishing the league’s most recognizable and legendary figureheads for stating facts about the league cripples its image more than it could strengthen it.

No matter how hard Riot tries to stop Doublelift, he’s still right: The LCS is dying, and Riot has missed opportunities to grow the league left and right, with the company’s latest squander coming earlier this month. While the rest of the world’s domestic League competitions are seeing steady growth in their viewership numbers, the LCS is moving in the opposite direction.

Although the LCS took a temporary hiatus during the second weekend of July, League fans were still treated to action between some of the biggest names in the game’s community. The “Ultimate Crown” showmatch on July 9 featured competition between some of the streaming sphere’s biggest names, including Mr. Beast, Ninja, Emiru, Tyler1, and Ludwig, among others. Retired LCS pros like former Curse mid laner Voyboy and Doublelift also participated in the event.

But there were no active LCS players in the high-profile showing, despite Doublelift’s claim that perhaps the highest-profile current player of all, Team Liquid mid laner Bjergsen, was originally slated to play on Mr. Beast’s team during the match. Riot and the LCS, Doublelift says, blocked Bjergsen from playing in this event.

“Why would you not let one of, if not, the face of the league, play in an event with two of the biggest creators in the world?” Doublelift originally asked on his stream. Frankly, the question makes perfect sense. It would have been an absolute PR lay-up for Riot to allow its most prominent LCS player to participate in a showmatch alongside the streaming sphere’s most popular figureheads. It was this missed opportunity from Riot that prompted Doublelift to claim the LCS was “dying.”

It’s likely Riot had no intention of Doublelift’s suspension becoming public knowledge, let alone the spectacle of discourse it has become over the past month. Pro League fans have learned nearly everything regarding this situation firsthand from Doublelift’s point of view. Dot Esports reached out to Riot regarding Doublelift’s suspension, but received no response to a request for comment on that matter.

While forbidding Bjergsen from promoting the LCS alongside some of streaming’s biggest stars is a blunder in and of itself, suspending one of NA’s most storied players in Doublelift from actively boosting the LCS’ viewership intake through his own personal stream, all for arguably accurate comments he made, is a true head-scratcher on the part of the league. Punishing Doublelift for pointing out the league’s declining numbers doesn’t solve the initial problem of a dwindling viewer base.

The LCS is losing viewers at an alarming rate

There’s a sizable amount of truth to Doublelift’s claim that the LCS’ viewer base is “dying.” And what’s even more concerning is North America is quickly being challenged, if not surpassed entirely, by other domestic League competitions.

The LCS is drawing 40,000 fewer average viewers this summer when compared to the 2022 Spring Split, according to viewership data site EsportsCharts. Since the 2021 Spring Split, the LCS has lost nearly 100,000 average viewers. Last week, it was reported by Richard Lewis of Dexerto that TSM internally floated the idea of migrating away from the LCS in favor of Europe’s LEC due to a steady decline in interest in the North American League scene.

The LCS has not seen split-to-split growth in its average viewer base since 2020. Dating back to last year, the LCS has seen regression in its average viewership in four consecutive splits. Furthermore, the LCS has never had a split with fewer than 100,000 average viewers since regular season viewership tracking began in 2017, according to EsportsCharts, but is on track to fall below that mark this summer. Keep in mind that the numbers shown above account for the viewers of the playoffs and finals of respective splits. But even with a boost in the form of postseason numbers applied, the LCS still lags behind other leagues.

Related: LCS sits behind LCK, LEC, and CBLOL in average viewership during the 2022 Spring Split

With tens of thousands of loyal viewers leaving in droves, the league needs as much attention brought to it as possible if it wants to avoid a record-setting low for viewership numbers this summer.

Academy-level players are allowed to submit a request to participate in third-party tournaments as long as they “occur fully outside of the LCS competitive season and all Riot International Events,” according to Rule 14.8 of the 2022 LCS Rulebook. No distinction in the rulebook is made for LCS-level players, and no specific dates regarding this rule for the 2022 season are mentioned.

Regardless of the restrictions placed on Bjergsen and his potential participation in a showmatch, the lack of exposure for the LCS is still a missed opportunity. There are no positive effects to having your active players sit on the sidelines while your league doesn’t broadcast any games. Preventing them from serving as brand representatives of your league ultimately hurts your league.

“LCS could not pay Mr. Beast enough to insert one of their players into an event that is watched by so many kids—a completely different audience, so many kids, so many impressionable people who would potentially be interested in the game or potentially interested in watching LCS,” Doublelift said as part of his initial comments.

The Ultimate Crown showmatch between Mr. Beast and Ninja drew over 69,000 viewers on average across its four hours, while peaking at a viewer count that eclipsed 96,000, according to viewership data site TwitchTracker. Of those 96,000, how many had never seen League of Legends in a professional capacity before, and instead tuned in to see their favorite streamers?

Mr. Beast and Ninja are currently two of the biggest content creators in the streaming space. They’re practically 1A and 1B on every ranking of late-2010s and early-2020s video creators and streamers. Since 2020, Mr. Beast has uploaded 73 videos to his 100-million-subscriber YouTube channel. Only two have garnered fewer than 40 million views as of August 2022. He’s the most valuable creator on YouTube, according to Forbes. Ninja’s all-time peak of 269,154 concurrent Twitch subscribers ranks second all-time on the platform, according to TwitchTracker. The pair serve as prime examples of the literal definition of the term “influencer” more so than many other names in the space.

Beyond his temporary suspension from co-streaming the LCS, Doublelift revealed he’s also beholden to the effects of a strike system that penalizes partnered creators when they break Riot’s terms. And he says he’s already on his second strike with Riot. The first came when he viewed a YouTube video that included profanity on his livestream.

Following Doublelift’s suspension from co-streaming, fellow Ultimate Crown participants Mr. Beast and Tyler1 both chimed in on the situation. Mr. Beast referred to Riot’s blockage of criticism as a “phat L,” while Tyler1 mocked the situation, saying “[Doublelift] should be happy” he doesn’t have the chance to co-stream the league.

“Not only does NA LCS suck, but the game’s boring as fuck right now as well, so these casters are trying to think of some shit to talk, and like 90 percent of the game, they’re just talking about their day and shit,” Tyler1 said. “It’s actually miserable.”

Tyler1, much like Doublelift, has a point. Professional League is slow this summer—much slower than it has been in recent memory. LCS games feature four fewer kills on average this split in comparison to the aggregate from the last three competitive splits, according to League stats site Games of Legends. The league’s 22 kills per game this summer is the lowest total number of average kills in an LCS split since 2020.

If Bjergsen had been allowed to participate in the Ultimate Crown showmatch, it’s still impossible to say how many unindoctrinated League viewers would have turned around and tuned into the LCS the following weekend. Even with an active LCS pro in the mix, Ultimate Crown was still a loosely related event that barely resembles what League games look like on the LCS stage. Still, Bjergsen’s potential presence wouldn’t have hurt—especially since the Ultimate Crown event was the only major Western League tournament the weekend of July 9 with the LCS and LEC both on break.

Regrettably, it was a missed opportunity for Riot to push the LCS brand, especially considering the league’s struggling viewership numbers. Even more regrettable were the league’s actions of censorship toward Doublelift for pointing out trends in those numbers.

Correction Aug. 6 12:41pm CT: An original version of this piece stated that Riot Games had not provided a public statement on Bjergsen’s prohibition from playing in the Ultimate Crown showmatch. In fact, Riot provided a direct comment to independent content creator Travis Gafford regarding the matter, which he, in turn, made public on his YouTube channel.

“The LCS abided by the policy set across all LoL esports regions against competitive participation in third party tournaments while in-season,” Riot said in its statement.