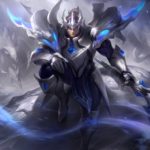 Almost two years ago, League of Legends players had the chance to experience the Dawn & Night event for the first time. This week, players will receive six more skins of the same theme, along with a Prestige Edition and a Worlds-themed skin, with the release of Patch 11.19.

The newest additions to the Dawnbringer line are Yone, Morgana, and the game’s latest champion Vex. Like the previous Dawnbringer skins, their principal traits will be a light-blue color and the goal of bringing order to the cosmos. Yone will join the opposing side to his brother, Yasuo, who is considered the original cosmic entity that gave birth to the other descendants.

Among Yasuo’s descendants, we have three new arrivals to the Nightbringer line: Tryndamere, Lillia, and (finally) Kayn, who will also receive a Prestige Edition for his upcoming skin. Within the event lore, Rhaast was once an archon of light, a beacon of order, which is why Kayn can be seen wearing light-blue colors if he takes up the darkin’s form. But now Rhaast is just a weapon in the hands of Kayn, an ambitious demigod of dusk.

Patch 11.19 is also tweaking a few balance numbers before Worlds 2021 begins. To honor the international event, Riot Games will also release a Worlds-themed skin for the Exemplar of Demacia, Jarvan IV.

Every skin will hit the client store with its own set of chromas in Patch 11.19, starting Sept. 23.