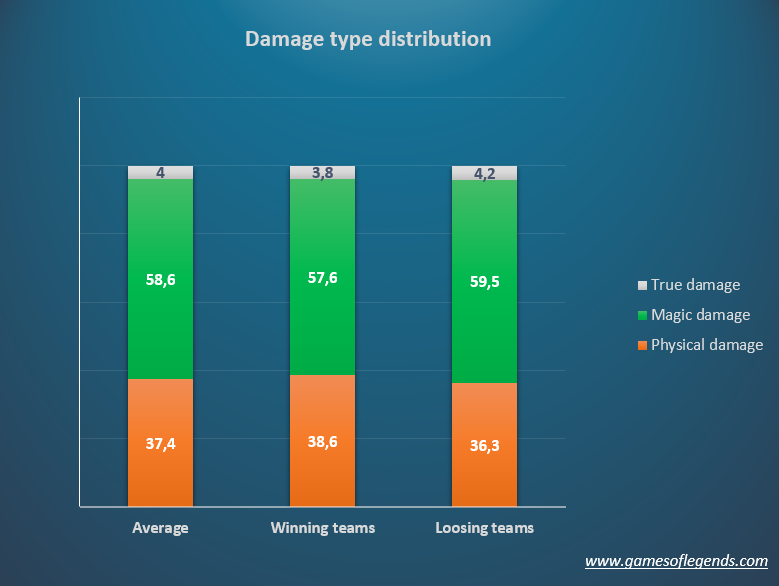 Today, I will look at team damage type and compare it with win rate. I will basically provide numbers, it’s difficult to draw any strong conclusion because there is so many different team compositions in terms of damage distribution: AP/AD toplaner, AP/AD jungler, … Still, I think the stats are worth sharing.

We can see in average, teams do more magic damage. Maybe because of the summer split meta, poke champions doing a large amount of damage. We can notice slightly more physical damage for winning team, I can think of two reasons for this: 1. It’s easier for the AD carry to dps if his team had an advantage. 2. Winning team are more focus on making their AD carry snowball.

Next I will look at each damage type, provide win rate distribution, and some example of extreme case.

Well, it’s pretty clear, too much Magic Damage is not good. Under 60%, the win rate is pretty stable, even below 30%.

Let’s look at the extreme case, the team with the highest magic damage share was JinAir in CJ Entus vs JinAir :

But it was a defeat, let’s look at the winning team with the highest magic damage share. It was TSM during Enemy eSports vs TSM :

83.9% magic damage, mainly due to an insane amount of damage from Bjergsen’s Kog’Maw:

Unlike magic damage, you need a minimum of physical damage to maintain a good win rate. Between 30 and 60% seems the good range.

The team with the highest physical damage share was Gambit Gaming: Gambit vs CW

22% true damage only from Irelia and Ahri (with ignite) but it was a defeat.

As a final note, here is the damage distribution for teams qualified for Worlds Championship:

Remember champion pool have a big part in damage type distribution. For example, SKT T1 has a lot of magic damage, not only because of mid lane, but also because of MaRin playing a lot of Maokai/Rumble, Bengi a lot of Evelynn, and also Bang playing Corki.

I hope you enjoy reading this article, you can contact me on twitter @bynjee, any feedback are welcome. Datas comes from www.gamesoflegends.com, feel free to ask me if you want any specific stats.