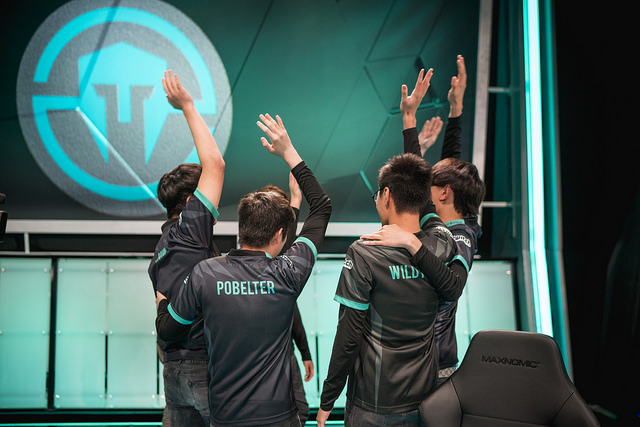 Immortals took the North American League Championship Series by storm in their first split when they posted an incredible 17-1 record. Not only did Immortals win, though, they dominated. Immortals took down teams in some of the most impressive displays of strength in LCS history, with wins like their smackdown of Team Impulse in only 18 minutes and 16 seconds.

Despite Immortals’s stellar regular season, the team “crashed and burned” in the playoffs, resulting in an upset at the hands of Team SoloMid. TSM swept Immortals 3-0 to the surprise of nearly everyone, though Immortals managed to come back and defeat Team Liquid the next week for a third place finish. While TSM clearly improved as a team, most who watched the series would stress that overconfidence was the real killer for Immortals. Huni’s off-meta picks in Lucian and Graves were no match for the buffed tank toplaners of Ekko and Maokai. Ultimately, Immortals paid the price for not taking the playoffs seriously.

With the middle of the Summer Split looming, Immortals still look like a top team, but they are no longer the dominant force in North America that they were during the Spring Split. Through four weeks, Immortals have a 7-1 match record and a game record of 15-5. Despite their second place standing, Immortals have displayed some cause for concern in that they are not closing games out as cleanly as they once were. Still, members of the team claim that the current iteration of Immortals is better, though the veracity of such a claim is worth investigation.

Yeu-Jin “Reignover” Kim is quietly still performing at a high level. While his First Blood rate is down from the spring (45% now compared to 61% then), his stats across the board are almost identical. This is good news for Immortals because Reignover’s Spring Split earned an MVP award for the jungler, but more importantly, he gained a reputation – nobody was safe around the map, even in their own jungle. Immortals took a staggering 57.1% of the jungle camps across the map during their dominant Spring Split, and while the number is a much more reasonable 54.5% today, Reignover is clearly still doing a good job of controlling the map.

Like his partner Reignover, Eugene “Pobelter” Park is performing incredibly well. He has posted a massive 29.0% of his team’s damage. This is a drastic increase from his quiet 23.5% of the Spring Split, but Pobelter’s improvement corresponds to the midlane mage update, so the better performance makes sense with context. Still, Pobelter deserves recognition for being the main source of damage while controlling the midlane.

Adrian has been the same, solid support that he was last split when he shaped the metagame with his usage of ranged supports. While Immortals as a team wards incredibly well, warding numbers across the board are down – except for Adrian. The ranged support specialist increased his WPM from 1.32 to 1.50 to make up for the dip in warding numbers of his teammates. He continues to be solid in lane and a good counterpart to his aggressive ADC, WildTurtle.

So what exactly is wrong with Team Immortals, then?

Both Huni and WildTurtle are in slumps compared to their Spring Split selves. Both seemed to be the superstar carries of Immortals during the Spring Split, as Pobelter took a more supportive role on the team and Reignover simply set the two up for success with jungle pressure. Huni and WildTurtle’s stats have taken dives this split, and despite their most recent games against Team Liquid in which both looked rather impressive, the pair has struggled against better competition.

Seung-Hoon “Huni” Heo will always be known as the carry player from the toplane. Regardless of metagame shifts, Huni seems to always play the most aggressive Champions possible. Huni’s Champion pool this summer consists of Irelia (8 games), Ekko (3 games), Lissandra (3 games), Riven (2 games), Rumble (2 games), Trundle (1 game), and Hecarim (1 game). All of these Champions are known for doing high amounts of damage; Huni even built AP rather than tank stats on Ekko when he got the chance to play him. Despite his Champion pool freedom, Huni’s damage plummeted from 27.0% to 21.8%. A possible explanation for the sudden drop in damage could be that Pobelter’s increased importance as a mage player might deflate Huni’s stats, but even then, Huni’s damage per minute is almost 100 less than what it was last split. Huni’s First Blood rate is down significantly as well. Previously, Reignover and Huni worked incredibly well to secure First Blood together, and they shared nearly identical First Blood rates, but now Huni is at a low 30%, hinting at a change in Reignover’s priorities in the early game.

Jason “WildTurtle” Tran has looked like a shadow of his former self during the Summer Split. His numbers are at staggering lows. WildTurtle looked as though he had found a true home during the Spring Split, as he played with a new vigor, but his Summer Split stats are disappointing. The only other elite ADC with similar statistics to WildTurtle is Doublelift, but this split, Doublelift has effectively been a glorified tower destroyer who contributes in some teamfights. TSM has found little resistance to their rotation play outside of their matches against Echo Fox, so Doublelift’s stats have not been cause for concern (outside of some unnecessary deaths). However, WildTurtle takes the most resources on his team and deals pitiful damage compared to other elite ADCs. Bang, PraY, Sneaky, Rekkles, and Zven all do at least 29% of their team’s damage, and while this number might be slightly high as a benchmark, WildTurtle does not even compare with only 24.6% of his team’s damage. His DPM is down from 674 to 583, which is certainly a cause for concern. Even worse, while he previously went even in lane, he currently sits at a -7.1 CS deficit on average with a -342 gold deficit to boot at 10 minutes.

As a team, Immortals face a few problems as well. They often trade an early Dragon for an early tower, as their first Dragon rate is at a relatively low 60% this split. While they lead NA in taking the first tower (80% of games), giving up early Dragons after the numerous buffs they received is not ideal in this metagame. Though 60% is not a true cause for concern, Immortals led NA during the Spring Split in terms of First Dragon rate, so the team is clearly capable of taking the objective in a smart manner, but simply hasn’t shown the ability to do so yet.

Though Immortals remain a top team in North America with their 7-1 record, they absolutely do have areas they can improve in. Huni and WildTurtle’s regression this split have shown through clearly in the statistics, and Immortals as a team are no longer the squad that once averaged a 2,406 gold lead at 15 minutes. While Adrian and Pobelter might have a point in reasoning that the current iteration of Immortals is better, they should expect more out of their toplaner and ADC if they look to regain their previous form.

All stats come from Oracle’s Elixir.