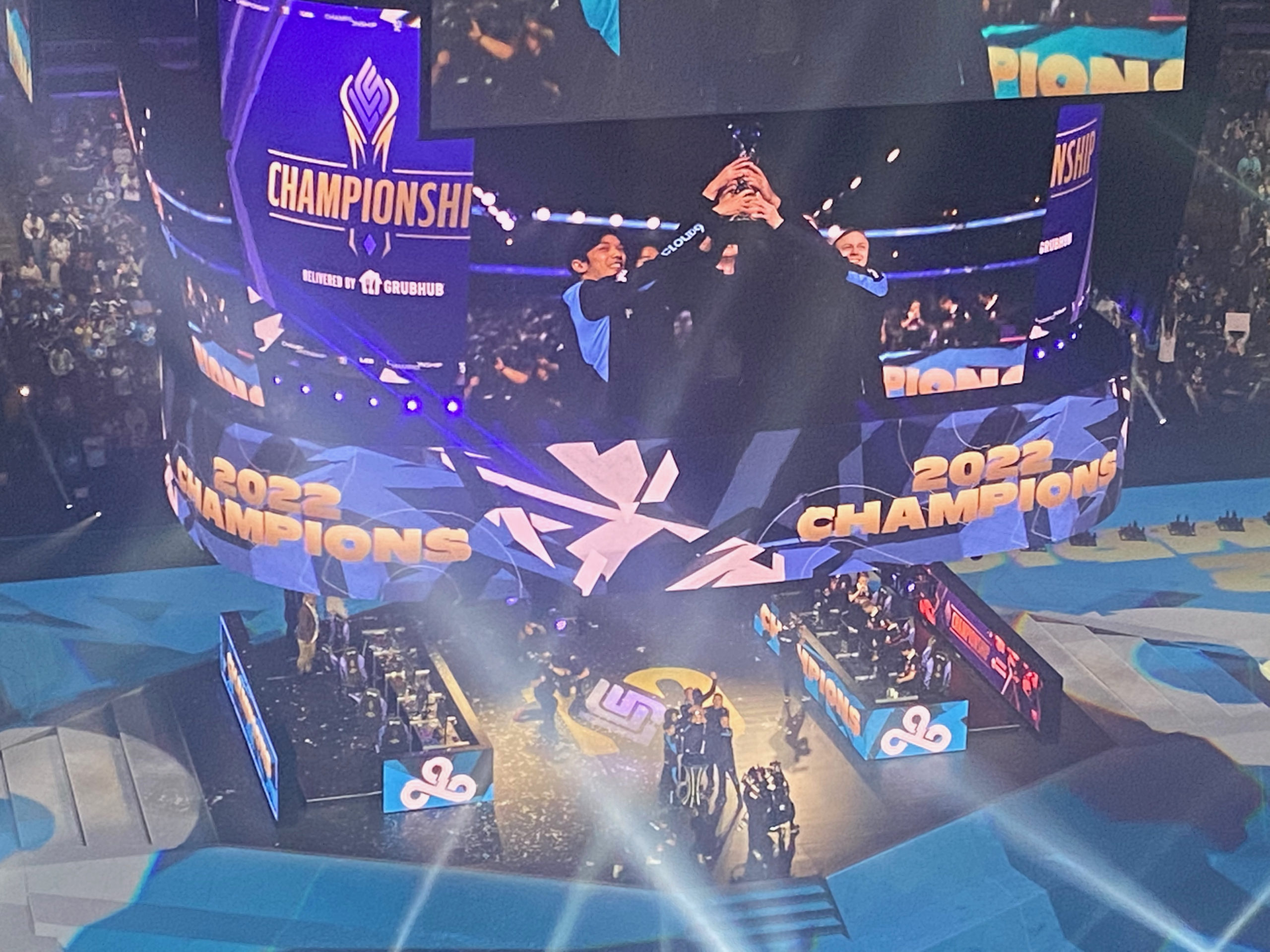 Fireworks lit the United Center in shades of blue and red in anticipation of the LCS Championship finals matchup between Cloud9 and 100 Thieves. Despite entering the finals as fifth seed, C9 successfully earned their first LCS trophy since the 2021 Mid-Season Showdown—taking down their opponents in the only sweep of the bracket.

This trophy marks the end of a tumultuous year for C9 in the LCS, which underwent massive roster changes, coaching controversy, role swaps, and the return of some of the organization’s most recognizable players.

On the other side, 100T continue their streak of sweeps in every finals they’ve been in, including this year’s Spring Playoffs, their victory in last year’s LCS, and the 2018 Spring.

100T entered this rematch from the winner’s finals of the LCS Championship after a back-and-forth series against Evil Geniuses, where they were ultimately able to take down the team that ruined their playoffs run in the Spring. Despite 100T placing all of their trust in Abbedagge and Closer, continuing with what had afforded them a dominant run in the Summer Split into a second-place regular season finish, one factor sent them into their lower bracket run: Berserker.

And, like in that previous series, Berserker found even more opportunities to shine among his veteran League teammates to bring him and the rest of C9 the LCS trophy.

C9 recognized the importance of Berserker throughout the series, drafting compositions around him with picks like Kennen, Nocturne, and Zilean. 100T was forced to pay more attention to Berserker’s champion pool after his game one Zeri game, despite the ADC having one of the largest champion pools of LCS marksmen.

Yet, nearly none of 100T’s target bans could limit the understanding C9’s ADC had of nearly every matchup. It became increasingly difficult for 100T to locate ways to deal with Berserker as, on the opposite side of the map, Fudge and Blaber were continuing to accumulate large leads for themselves.

Just one teamfight in each League finals game was enough for Cloud9 to control the pacing, forcing 100T to be fully prepared to fight nearly every second.

In the final game of the series, C9 ensured they struck fear into the members of 100T with an immediate invasion into enemy territory and a kill for themselves. This appeared to completely throw off an already-struggling 100T, resulting in mistimed ultimates and vision loss of their opponents that provided C9 with all of the tools they needed to effortlessly continue their dominance.

With Jensen and Zven at his side, Berserker was free to ricochet attacks off of each member of 100T without worrying he’d be taken down.

Though Zven denied Berserker what could have been a Pentakill to win the final game, C9 rejoiced in becoming the lowest seed to ever enter LCS playoffs and win it all.

This victory marks a multitude of accolades earned for various individual members of C9. This is the first LCS trophy for Berserker, ending with a KDA of 23/1/24, who debuted alongside a readjusted C9 roster in the Spring Split and quickly became one of the most dominant ADCs in the region. Jensen is also breaking a multi-year curse of never having won an LCS trophy alongside C9, who continued to qualify for Worlds, yet never emerged from a playoffs in first.

Another accolade goes to Zven, who has now won an LCS trophy in two roles.

The Worlds group draw show will take place immediately following this series, where all of the groups for both the Play-Ins and Groups stages will be randomly determined. Yesterday, the Istanbul Wildcats were the final team to qualify for this year’s Worlds, which is set to begin with the Play-Ins in Mexico City, Mexico on Sept. 29.

100T and C9 will enter Worlds directly into the Group Stage.