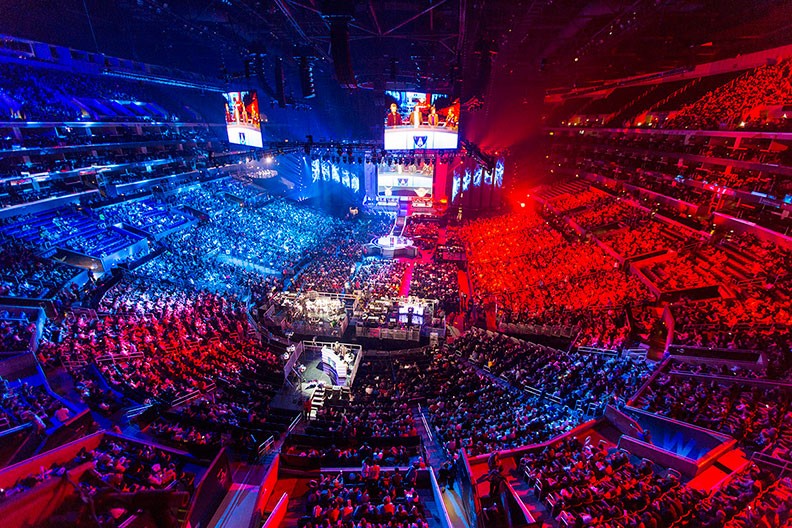 One of the most important matches in Summer Split EU LCS 2015 was H2K vs Origen at week 9. Both teams were facing for 2nd place and secure semifinals in playoffs. They are aiming high – for World Championships and both needs a lot of points to get straight promote to Championships which are held in Europe or start in Regionals with NA team. Origen was in better position because they won first match and they were leading by 1 win. Furthermore H2K was on very bad streak with 1-3 in last 2 weeks, but Origen wasn’t much better ending up with 2-2 score. Worlds scene – dream for both H2K and Origen teams

Before we will start analyze of this match we must know who would play versus who. Complete anylyze of H2K you can find at this link (http://www.goldper10.com/article/2031-is-h2k-a-one-trick-pony-or-stable-team.html). Most dangerous player of Origen it’s without any doubt their founder and captain – xPeke. Champions which you should be concerned are Vlad with 4-1 score and Varus with 3-0 score. Second most known player is sOAZ – both played in Fnatic. Toplaner who is most frequently picked by frenchman it’s Rumble with great 5-0 score. In jungle we can find ex-TSM player – Amazing with 5-2 on Gragas. Botlane belongs to Niels and Mithy. ADC usually play Corki, Sivir or Kalista and Suport picks Thresh or Alistar – both 4 times. Favourites teamcomps for H2K is hypercarry and for Origen poke, but xPeke team is picking most original setups in EU LCS and we could expect really diffrent scenarios in pick & bans phase. Usually we prefer to have first pick and lock-in first strong pick before our opponent. For few patches teams prefer to have second pick – take 2 power picks + have last ban. But as I wrote in my previous article H2K needs first pick very much. Without any doubts we expected fight for 3 champions: Rumble, Gragas and Thresh which works really good for both sides. Interesting should be ADC choice and wide midlaners champpool.

H2K tactic was pretty simple: take away 2 most dangerous champions from xPeke and Mithy by banning Varus, Vlad, Alistar and taking Thresh, who is very dangerous in kaSing hands. Origen answered with toplane bans: Rumble plus Ryze and very strong ADC Sivir. Then they took Corki and Rek’Sai and left Kalista and Gragas open – next two main champions for Hjarnan and loulex. But instead of this two picks H2K decides for Gragas and Fizz. Fish is known as toplaner in last patches but Ryu also loves this champion with amazing 22 KDA in 2 games during Summer Split. In my opinion it was bad call but determined by taking off the table 3rd most played champion by sOAZ. Fizz is great duelist and Origen countered this pick very badly with two flex picks: Shen and Lulu. H2K ends pick&ban phase (honestly I have no idea why it’s not called ban&pick since you start with ban and ends with picks) with expected Kalista and Twisted Fate. Again I don’t like H2K choice because TF into Shen and Rek’Sai isn’t as much effective as he is usual. Also he doesn’t fit to Kalista too much and with Thresh they have 3 champions without any inbuild escape mechanism. Origen answered best pick you can imagine to this no escape setup – Victor.

I didn’t like Origen opening with Corki and Rek’sai but with time I liked they teamcomp more and more. In my opinion H2K should stay with their best hypercarry teamcomposition with for example Maokai or Gnar top and Orianna or Ahri mid. With such composition they must camp top and care for Fizz snowball with great Gragas 2v2 potential and TF ulti and then with kills on Fizz and TF try to 1/3/1 split push. While Origen gameplan was quite simple: do not let Fizz snowball with Shen Ulti and Rek’Sai tunnel system, feed Victor and secure as much dragons as possible with Corki midgame powerspike.

First interesting thing to notice it’s laneswap or rather lack of laneswap from both teams. There are 3 champions who can gain or lose most from laneswap. Fizz needs kills to snowball so in one hand we have tower advantage after laneswap and much easier Twisted Fate ganks to execute but during laneswap toplaners usually don’t get much farm and it takes longer to finish their core items. Second champion which you should consider it’s Shen who has really poor 2v2 lane presence and usually teams with Shen support puts him into 2v1 lane. Another champion or this time rather pair of champions is Corki and Kalista. Usually Corki has very good laning phase and all hyper carries prefer to do not face him, but if we consider Shen impact on laning phase H2K botlane presents a bit better. It’s hard to predict who can gain more on laneswap. With flawless execution H2K should snowball Fizz and Twisted Fate and win with easy 1/3/1 push. But if Origen win laneswap they would have dragons and midgame advantage and with Baron they should be enough strong to close this game pretty quickly.

Game started pretty even. On toplane we have tie and slight advantage for xPeke on mid but advantage for Hjarnan on bot. A bit more active in jungle was Amazing securing Baron crab and forcing Ryu to use ghost and then invading gromp. Then junglers trade pinkwards but game was really slow.

As we supposed first real gank was Twisted Fate ultimate on top lane. With double sheen they expect to burn Lulu really fast.Worth noticing it’s fact that Ryu is already 20cs behind xPeke and his lane is pushing and Amazing it’s much closer to toplane than loulex, so this gank wasn’t prepared perfectly for H2K. Soaz was in very bad position but he decided to run to blue tower and use Amazing and xPeke better positions. With great flash from Chum the Waters and Ryu misscalculations with stun from yellow card this situation quickly turned against H2K. Mithy joined with Stand United and Rek’Sai used her tunnels and suddenly it was 3vs2 situation. With Wild Growth and numerous advantage Origen had no problems in taking 2 easy kills. Meanwhile xPeke cut off loulex and force him to escape with flash. In this situation we must give honors to sOAZ who didn’t panic after Twisted Fate ult and bait Odoamme and Ryu to really end. Also other Origen players react correctly: xPeke follow Ryu, Amazing turn top really fast and Mithy used his ultimate in perfect time. On H2K side I would blame most loulex and lack of comunication, because this gank should be discussed and planned a wihle earlier. When Ryu gave up mid and go back base Gragas was spotted on river while taking crab then he go back to defend mid. If only he would be closer to Blue Buff he would have no problems in cutting off Lulu and securing kill, but then most likely xPeke would just push mid tower, but it’s calculated risk when Twisted Fate ganks while losing the lane.

After this action two champions which were supposed to snowball start losing lane even more, especially Ryu who was now not 22 but over 40cs behind and almost lose tower. Futhermore Amazing secured top tower and after sOAZ teleport to botlane they force Hjarnan to recall and give away bot tower and dragon. Only because 1 unsucesfull gank H2K lost 2 people, 2 towers, dragon and about 2.5k gold.

Not  a long while later H2K try to setup a toplane gank once more and again loulex was completly not prepared for it. Gragas should start gank with Flash Body Slam to be sure to hit Corki then Odoamme should use Chum the Waters and later on Twisted Fate should join and stun Corki and Explosive Cask should secure the kill making Corki’s Walkiria and Flash useless. But Gragas had cooldowns on Flash and Ultimate, Fizz used ultimate too early and Corki easilly Walkiria away from it and H2K just waste some summoners and time while Victor’s cs advantage went bigger.After this intense few minutes both teams lost concetration for a while. Origen went way too deep into Kalista and trade 2 kills for 3 and a moment later they lost Corki.

After 16 minutes of game and failing first gank H2K was back to game. Fizz got some free farm and Twisted Fate and Kalista earned 3 kills and despite losing 3 towers H2K stayed on 2k gold gap but they had much better shared gold from kills than Origen. Trades for kills stop after loulex death at Origen Blue Buff and not catched lantern from kaSing and teams went back to standard lanes and farming mode.

Once again H2K decide to speed up match starting up with Twisted Fate Destiny.Corki walk away with Walkiria for safety spot but Victor came from wolves into 3 players of H2K. Unluckily for him Twisted Fate still had unused yellow card and stun him and then Fizz joined the party and together with Kalista shut down xPeke even before this teamfight started. Another victim of this fight was Niels and after losing 3 dragons and 3 towers H2K finally went in front of H2K in towers, kills and gold. Once again it was perfectly executed catch composition which H2K surly have with Thresh hook, Twisted Fate yellow card, Kalista Rend and Fizz Chamber the Waters.

When H2K took two more kills and finally they fit their win conditions xPeke decides to win this match on his own by smashing Kalista. At this point I would say that kaSing should do much better. He used lantern for fake gank and do not use Death Sentence only panicly clicking R. It was obviously Hjarnan mistake but versus Lulu speed up and used summoners he can’t really do more. Great play but ex-Fnatic teammates practically ends this match.

With Baron buff Origen had no problems in securing next two towers and gain huge advantage, especially mental. Despite being equal on gold Origen can force H2K to fight on baron. H2K somehow break first Origen barrier – Amazing on Rek’Sai but then Ryu made huge mistake and didn’t join team but stayed alone and Origen without any problem catching him with Niels Flash and BOTRK, securing 2nd Baron and winning the game.

It was crucial match for 2nd position in EU LCS and securing semifinals in playoffs. H2K had to prove they can win versus good teams and play it correctly. This match clearly showed us that despite being almost whole match equal in gold H2K had huge problems in planning, comunication and decision making. Origen played very well from pick&ban phase to closing this match in confident way with both on high level – individual performance and eamplay.

Feel free to leave comment about this article or about ideas for my next article. You can also visit my fanpage – click.