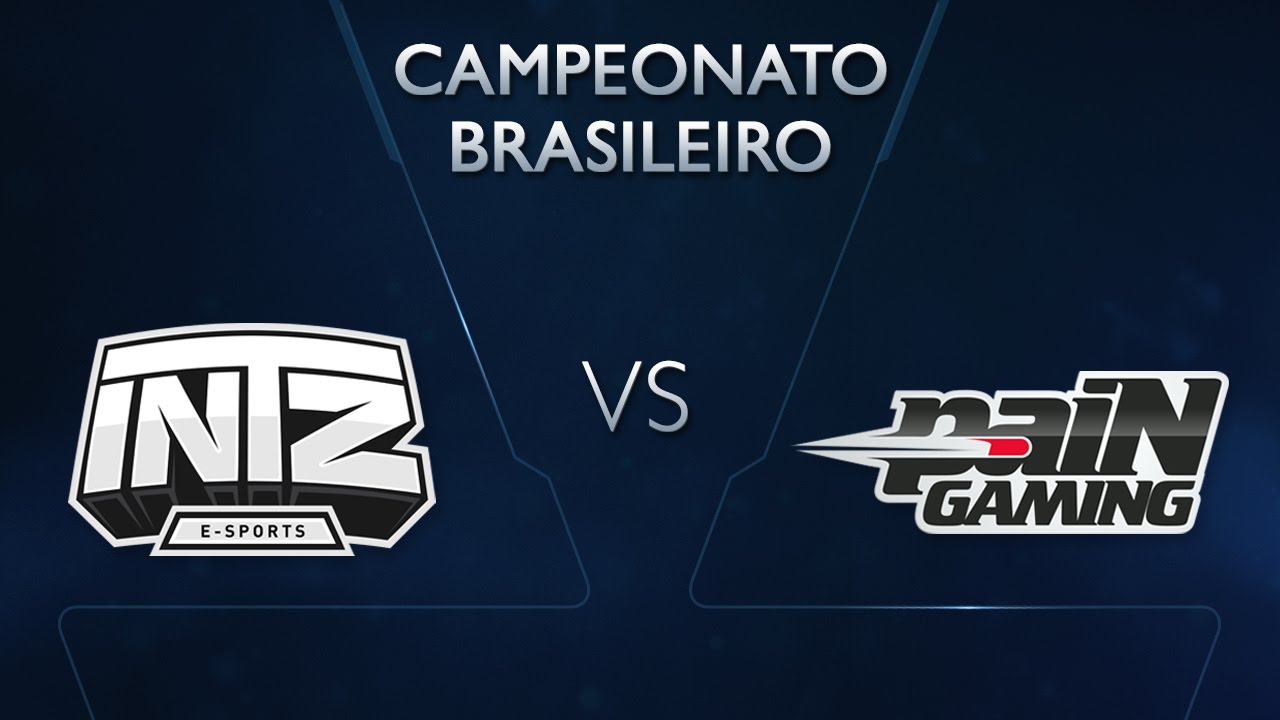 The CBLoL finals, Brazil’s major League of Legends tournament to be held in Allianz Park Arena on August 8 in São Paulo will be the most important match of the year for the brazilian LoL fans. Summer Split champion INTZ are going to face off former 2013 champions paiN gaming into a bo5 to decide the title of the split and who will represent Brazil in the IWC for a spot into worlds.The Storyline for this match goes far beyond this year: paiN, a team stacked with 4 of the best players Brazil ever had finally seems to have found a playstyle that suits their stellar roster. The semifinal against old time rivals Vivo Fibra Keyd Stars turned out to be a surprising stomp for paiN, and was a gigantic boost for the team to making into worlds. They will be facing INTZ, the summer split champions now with Alocs in the support role and Jockster, former support of the team, moving to his main role in the jungle. INTZ is the only team in the country who which all players are CBLoL champions. They only lost 3 games in the split, two in the first season of the regular season against Keyd and one in the semifinals and one game to G3x in the semifinals, in a Samsung-White-troll-fashion loss. Hard to argue against INTZ being the best team in Brazil right now, and the favorites to win the finals, but paiN gaming’s rise on the end of the season alongside with being the fan favorites to win the match creates an exciting environment to the last game of the season. Let’s take a look on the teams:

INTZ is the only team in the league who has a CBLoL title in every position. Alocs, the last member to join the team is a former champion of 2012’s CBLoL, a Brazilian legend who was looking for an opportunity to restart his career in the challenger series found in INTZ that opportunity, and INTZ found in Alocs the perfect fit to recover the wound that Revolta departure had left in the team. The organization infrastructure grew along the year with the addition staff of coaches formed by Renato “Shakarez” Perdigão and Alexander “Abaxial” Haibel, whose work throughout the split had put INTZ in a strong shape for the finals.

After Revolta’s departure and the cinderhulk meta, INTZ had to change their playstyle. The team now priorities a more macro-oriented gameplan, with a heavy focus around the midlaner Tockers, INTZ’s main carry and the best player of the year in Brazil so far. His versatility and wide champion pool makes it almost impossible to target, and the team strong rotational play makes it even harder to make plays around the midlane and not get heavily punished for doing so. The semifinal against G3x is an amazing example of his skill: In 3 wins; he played TF, Diana and Viktor, 3 different champions with different playstyles, but with the same result: Tockers carrying INTZ to victory.

INTZ and Tockers wide strategically variety puts them a big step ahead of everyone else in the league. PaiN may have the talent in their roster to defeat them, but overall, the skill gap between the players it’s not big enough to give paiN an upper hand against INTZ. The draft it’s another huge factor in favor of INTZ. They have a reasonable amount of champions per role and they are really good on creating a good environment in the draft for their gameplan. In a region that still lacks a lot in the strategical level, INTZ is the dominant force that will likely drive the region to a next level, just as Keyd did in the past.

INTZ main force comes out of a great strategical approach and really good decision making. This group of 4 friends seems to be feeling really good with their new player, Alocs, one of the best supports of all time in Brazil who was the perfect replace for Revolta, who was bringing in the experience and the knowledge of being a top level player for a upcoming team at the time. Now champions of spring split, INTZ still has a lot to learn with Alocs, the only player who have earn a spot in all of CBLoL finals. Alongside him, in the botlane, MicaO now does a more janitor-role in the team since Tockers became the team main carry and in the toplane, Yang, the secondary carry for this team, is still having a spectacular year. Yang’s teamfight initiations truly fantastic, and no one does this job better than him in the league.

INTZ have been bootcamping in NA for this final. It’s hard to argue that they are the favorites to win the title and go to Worlds. But still being the best team overall, the fans seems to have picked the other team.

paiN gaming – All aboard the hype train

Think about TSM and WE. They are extremely popular teams in their countries, and even with some drop of performances, they still seem to have a large group of fans. This is how paiN is in Brazil. Along with a strong culture of love for your football team, the rise of e-sports during paiN’s best era and the popularity of players like Kami and brTT created a really strong connection between the fans and paiN gaming. paiN is the team of most of the Brazilians, just like Flamengo and Corinthians are in football.

After a tough loss against Millenium, EU LCS last place at the time, brTT decided to leave paiN in the beginning of 2014 to join the team that would become most powerful team in the history of Brazilian LoL, Keyd Stars, alongside with his old time rival at the time Mylon, Winged (former NJBS-Now in JAG), Suno (Former Repeared’s SKT) and Loop, the only one that remains in the organization till today. Lose brTT to the greatest rival was a huge strike for paiN, and it would be healed in the beginning of this year, with the return of brTT to paiN gaming after Keyd picked up Emperor and DayDream (former CJ Blaze). After summer split, the team decided to kick out Leko, who was in a Dyrus-Scapegoating situation in the top lane to pick up the most aggressive toplaner in the region: Mylon, who had left Keyd with the mentality that he needs to change to achieve victory, and now, this team has 4 of the best players in the Brazilian history, and 4 of the most popular and beloved players as well.

Alongside with the power of the fans, paiN can use the versatility of their roster to pick up an upset against INTZ. The team can use every lane to carry, which opens a big amount of possibilities into the team’s arsenal. Alongside with that, the team is now on a 5 game winning streak of surprisingly better macro strategy gameplay and better draft phase. In the semifinal, paiN crushed his biggest rival Keyd, abusing of the factor that Leko, now in VFK, is a weaker toplaner than Mylon and receives fewer resources from his teammates in a beautiful way.  It’s not enough thought: VFK players have an background of choking and even with good versatility throughout the series with Juggermaw comps and more poke heavy comps with Varus+Corki+Rumble, paiN has a lot to prove since they are having a shaky season since the beginning of the year. Facing off against INTZ, who is a team totally capable of abusing of paiN’s macro game weaknesses and slow decision making that was a constant factor throughout the year, paiN has the worst matchup against INTZ when factoring team styles: a macro-strategy focused team who plays around an consistent star player with a great use of rotational play, decision making and power spikes has the upper hand against the more raw talented and less strategically team.

It’s hard to point out the main carry for this team, but it has to be Kami. Just like in the 2013 championship run, Kami is having great performances overall. His longevity comes along with consistency, and with experience. Along with his brazilian teammates, Kami has been around for so long, finishing top 3 so many times that no one should expect less than a top individual performance from Kami in this final. All of the brazillian players in this team were top 2 throughout the entire history of brazillian lol. brTT is the most famous brazillian player and the best brazillian AD of all time, well knowed for his Draven mechanics back in the day of NA server, SirThulio has always been a strong presence and a remarkable duo alongside Kami and Mylon has always been a reckless boy who reigns in the top lane.  This roster is now the brazillian fans super team, and the expectations around them were always as high as they could be, but paiN had disappointed a lot in this regard.

PaiN has a lot of communication issues, though. They are the only team in Brazil that has to speak in 2 languages because of Dioud and you can’t see on his gameplay reasons enough to justify this huge problem. Alongside with that, paiN shotcalling and decision making has been shaky and slow throughout the whole year. paiN’s games are really long, even if they get an early advantage, it seems they prolong the game more than it’s necessary to win a game. Their teamfighting issues seems to have been fixed since Mylon joined the team, and their early and midgame is now better, but, since the half of the regular season, paiN’s problems seems to have been fixed little by little. In their last 5 games, the decision making its way better than it was in the beginning, the draft was really good with some nice variety and their gameplan and execution looks finally sharp, and a lot of that probably came from their coaching staff MiT, former team support in 2013 and Cella, ex-SC2 SlayerS coach. With their help, paiN finally seems to have become the team the fans always dreamed, but it still too soon to know if this rise is legit or if it will fall off in the finals.

It is hard to bet against INTZ. They were the better team during this whole split and still seems to have a lot to show if necessary. PaiN’s individual talent it’s really great, but their only chance is to develop a good strategy to nullify INTZ’s strengths around Tockers and Yang and improve significantly their decision making and game pace.  If paiN is able to play a nice strategical game against INTZ and win out of their talent, but if they keep some bad habits they had throughout the whole year, they will be crushed by INTZ.

I would be really happy to see paiN win, but i will say INTZ 3 x 1 paiN gaming in the finals. If you like a really hyped up action-packed games, you should definitively check out CBLoL’s finals in August 8th, 12 PM GMT -3. The event will be held in Allianz Parque Arena, Palmeiras Stadium and it will be broadcasted in the cinemas of all major cities around the country. The tickets for the finals were sold out in only two hours, and a lot of cinemas are sold out as well. The fans can’t wait to see who will win and go to the International Wildcard to fight for a spot into worlds. The winner of this match will be the favorite to earn this spot.