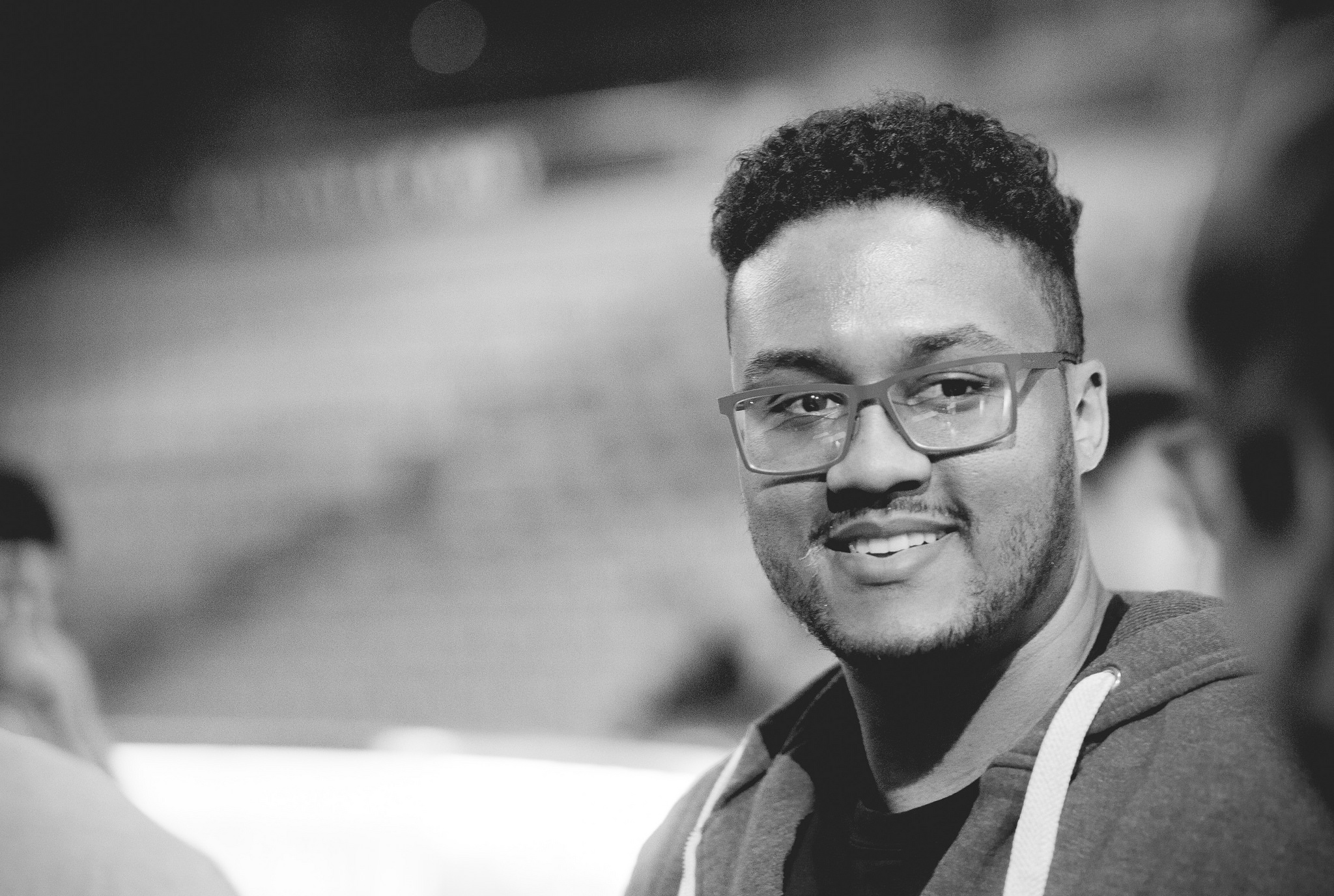 Zaqueri “Aphromoo” Black took on the mantle of captain and became an LCS champion. The CLG Support made the hard choice of building a new line-up without Doublelift and repeated that feat. Now, the West’s most valuable player has led a North American team to the first finals appearance of a major international Riot event in the LCS era. Legends aren’t born, they are made.

The pain of failure tests your limitations. Will you accept this situation? Can you change the circumstances which put you in this position? The agony of defeat questions your decision-making. Do you take responsibility for your own failings and battle to overcome them? The pressure of the moment shows you who a person is. Can your team-mate face this challenge head on? Can you help him?

How did one of North America’s most notoriously underwhelming play-off performers bring a rag-tag bunch, composed largely of unseasoned rookies or cast-off talents, to the brink of a major championship?

A year ago Aphromoo could be described in many ways, but few of them came without some negative connotation or additional context which demanded explanation. If he was a good Support player then he could still never be as impactful as Chauster, the veteran who had brought out Doublelift’s potential and completed his initial training, many seasons ago. If Aphromoo was one of the best Western Supports in the regular season, that excellence had to be mentioned in the context that in the play-offs he shrunk and could not deliver the same impact.

If he was a good friend to his team-mates, then it carried the undertone that he wouldn’t make the hard choices in who to remove or stand up against the dominant personality of Doublelift, his oldest team-mate. If he showcased his fantastic skills on stream and played loosely, then why could he not deliver his best in big play-off games? If he choked in the play-offs and lost all the true challenges of his career, could he actually be considered a great player?

For Aphromoo, as with CLG as an organisation, the words of the poet Charles Bukowski seemed to highlight the problem: “Potential doesn’t mean a thing. You’ve got to do it.”

Coming into the Summer of 2015, CLG were a team who had been eliminated in the first round of the NA LCS play-offs in three of their four splits, including the previous one. One of CLG’s fatal flaws had been the role of Link in previous line-ups, with the talented but troubled Mid laner unable to perform individually in play-off games and thus seeing his shot-calling suffer under pressure and CLG’s entire team structure collapse with him. Aphromoo had played a role in the shot-calling in those teams, but in the play-offs everything seemed to fall upon Link’s shoulders.

With Link gone from the team, Aphromoo stepped forward to become the captain of the team and bear the weight of leadership and working to bring the best out of his team-mates. Xmithie and ZionSpartan were entering their second split as CLG players and still looked out of place in the team. Replacing Link was Pobelter, a player touted as a future star for many years but who had settled into a consistent and middling player at the LCS level. Clearly, things could not be done the way they had been before and Aphromoo took on the challenge.

With a new coach arriving, Aphromoo set about doings things differently than he and CLG had done them. That would mean changing the most significant relationship of his career to that point in time: with the stubborn but supremely talented Doublelift, a world famous AD Carry and his bottom lane partner. In the past, Aphromoo had been a friend to his team-mates, particularly Doublelift. At that time, that appeared to be what Doublelift needed, as the former super-star suffered from a lack of direction in the post-Chauster era, having once upon a time had his every move directed by that CLG legend. Doublelift’s play was always solid, but he easily lost trust in his team-mates and thus it seemed critical to establish a relationship with a lane partner who would not let him down in the server.

As the captain of CLG, Aphromoo could not be a friend in the same way to any of his team-mates, but particularly Doublelift. Integrating the other members of the team required his attention and the sacrifice had to be made to give up streaming sessions with the star player. A friend, just as colleague, can accept one’s failings, as they are there to support those they care about and allow them refuge from the hardships of life. A captain works to understand his team-mates and support their talents, but he must also demand their best. As five time NBA champion Kobe Bryant pithily put it: “friends can come and go, but banners hang forever”.

The primary problem with Doublelift was that his competitive drive and high skill level manifested into a corrosive in-game personality. His tendency to bring his team-mates down ate at their confidence and dissolved the bonds of team-work between each of them. Worst of all, this withdrawl from the team concept so often occurred during high pressure play-off games, where Doublelift’s consistent performance meant he felt he could only rely upon himself and the scenario became “every man for himself”.

In such circumstances, a friend to all would be a friend to none. As the captain, Aphromoo had to act as a buffer for Doublelift and ensure his team-mates could operate without the ADC unduly affecting their system. The balance was a tricky one, as the AD Carry was still, rightfully, the primary star and carry of the team. Walking that tightrope, Aphromoo was able to guide the team to their first ever LCS title that split, marked by a strong play-off performance of his own.

Accepting the responsibility of being the captain and working to become one who could lead his team, Aphromoo built himself into a champion, but the moment which set him down the path which has led to the MSI final came months after that point. Following an unsuccessful World Championship campaign, Aphromoo was a part of the decision to remove Doublelift from CLG entirely, with the organisation even brokering a move to heated rivals TSM, the squad they had defeated in the previous LCS final.

“It’s either me or him” is the way Doublelift described Aphromoo’s decision, indicating he no longer wished to play with the star AD Carry. Aphromoo’s own account was of the organisation taking player input, coming to a decision and him agreeing with their conclusion. Regardless of who said what, as the primary name in the team outside of Doublelift, one can imagine Aphromoo was in a position of significant influence and the choice was not an easy one.

As good as Aphromoo had been in his LCS championship campaign, he had merely discovered how to deliver high level performances under pressure at last. As a leader and shot-caller, there was still room for growth and the Spring split of this year is when the world saw what Aphromoo was truly capable of. The new recruits to CLG were far more vulnerable than those of the previous year and it would be on Aphromoo to see them become functional cogs in the machine.

HuHi was a player who quickly set an underwhelming standard of play on an individual level as a Mid laner, one of the most consistent carry positions in League of Legends. With a small champion pool, often poor laning and lacking much power in team-fights, many saw the Mid laner as the primary liability of the team and the reason CLG would not accomplish much that split, especially in a league boasting the likes of Bjergsen and GBM. Now, we see HuHi as a player whose laning matters little, as his job is to help split-push as part of CLG’s 1-3-1 and arrive at team-fights to play a distracting role from the team’s ADC. Huhi is a player one must simply keep on the track of being patient and playing his role late, ignoring individual performance metrics.

Stixxay, the replacement for Doublelift, was a rookie in the purest sense and faced the impossible challenge of being expected to be Doublelift. Instead, Aphromoo had seen him through laning phases and allows him to play a critical role in CLG’s team-fighting style. When a full team-fight occurs, Aphromoo and Huhi’s champion selections often allow disengage and peel for Stixxay, leaving the young ADC to simply output auto-attacks, with space created for him to work within.

Coaching clearly plays a key role in designing the system by which a team will operate and how they will adapt their style, but Aphromoo is the lynch-pin piece to allowing CLG’s styles to work effectively. As a team controlling the map and remaining mobile, he is the shot-caller whose decision-making sees his team using the minions to force the opponent to always be making the right counter-move, else risk giving up key ground. At the MSI, where CLG has had to adapt to becoming more of a team-fighting side, Aphromoo has truly been the maestro behind their success.

This was never more evident than in the semi-final against Flash Wolves. The games saw Flash Wolves repeatedly taking leads in lanes and getting early advantages, but CLG’s victories came on the back fantastic re-engages at the right time and poised team-fighting. The man who sets the tempo, keeps his team patient and triggers their re-entry is Aphromoo. In a series in which barely any of CLG’s players stood out individually, the captain again and again called the plays which led the team to the final.

Look at CLG as they stand right now, even after this magical run, and there are so few all-star calibre talents on display, but as a team they succeed in a way those filled with more skill and bigger names cannot. The primary stars are ZionSpartan, whose split-pushing must be directed to benefit the team, and Aphromoo himself, who has emerged as one of the best all-around players in Western League of Legends.

Hai will long be remembered after he stops playing for his other-worldly shot-calling, but he was never as individually strong at his positions as Aphromoo is right now. YellOwStaR was impressive at bringing together a new group of players, including rookies, and winning more championships, but he was not the monster Support talent that CLG’s captain is. Alex Ich is the prototypical star captain, but he led by example and not with the kind of tactical understanding and finessed shot-calling that Aphromoo has been able to display this year.

Aphromoo showed us he was a good player two years ago. This year we learned he has become a great player. Now, he wants to be remembered as a legend.