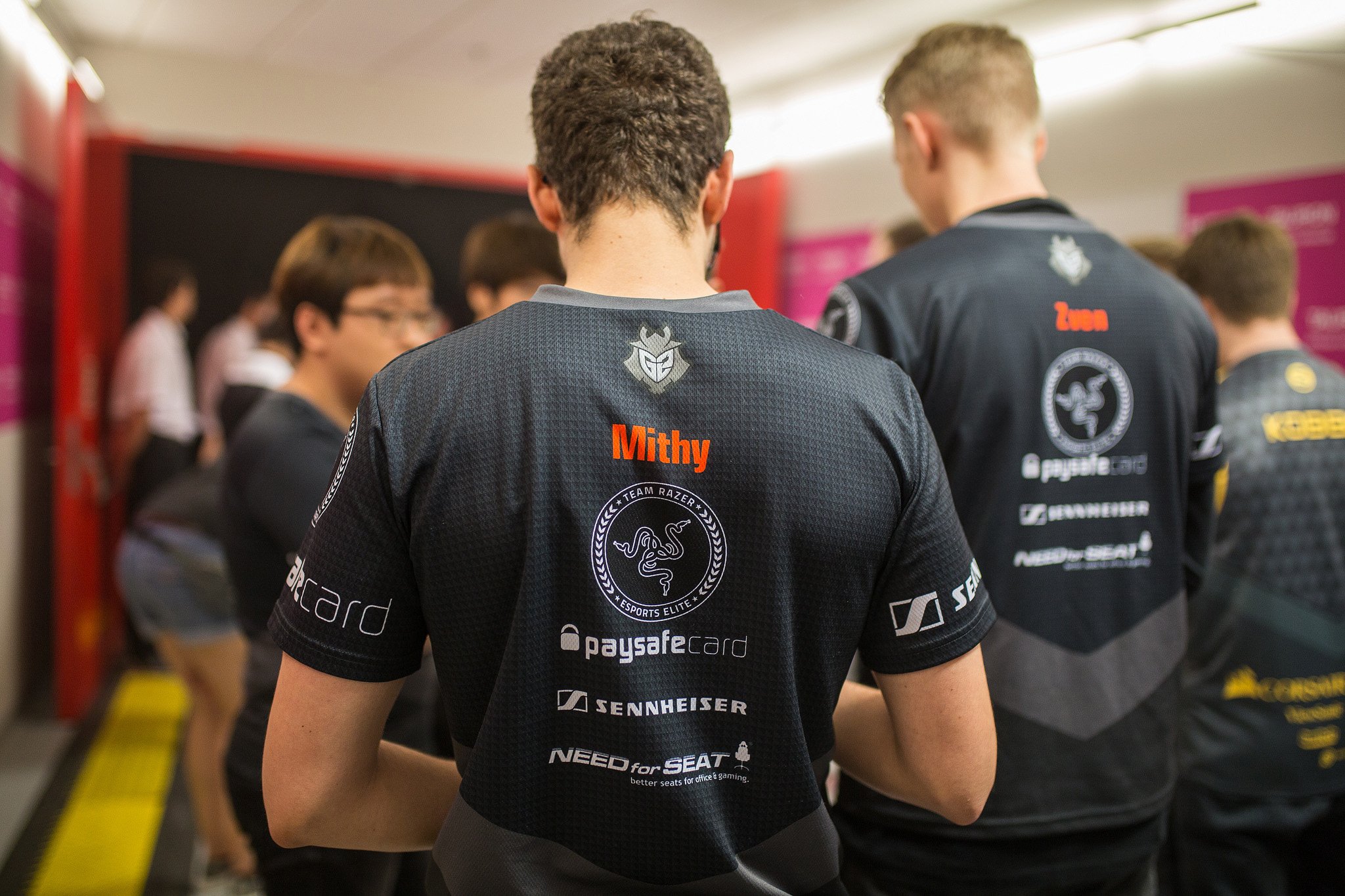 In a word, Season 6 in the European League Championship Series was unpredictable.

The best team all year, G2 Esports, looked lost when they left the continent. A team that looked like they were headed for relegation (Splyce), made it all the way to Worlds. And the third EU seed at Worlds, H2K Gaming, won their Worlds group.

All three of those teams brought their key players back for another run in Season 7. Now that the offseason is over, we looked at all the EU LCS rosters in order to rank the teams before the Spring Split. Ranking teams at the start of the year is extremely difficult because of roster changes and the evolving meta. But if the unpredictability of 2016 returns and we’re proven wrong, that will mean a lot of exciting upsets for EU fans.

Starting off the list is the team that has dominated for two consecutive splits and is looking to establish a dynasty.

We’re not sure who was more disappointed last year: Fans of EU teams chasing G2, or G2’s own fans watching them fail at international events. Both groups of fans are looking for vindication this year as G2 kept the entirety of Europe’s most talented roster.

G2 shouldn’t face much difficulty in their region. None of the players is a major weakness, and none of the other top contenders made game-breaking moves. Top laner Ki “Expect” Dae-han can play a bigger part in carrying after serving a more utility role last year. And mid laner Luka “Perkz” Perkovic can be more consistent, especially in clutch situations. He made uncharacteristic mistakes in some games and in others seemed to have little impact on the outcome.

But Europe was never the problem for these guys—2017 is about showing up against other regions.

Best Case: Perkz develops into a true star and the team makes things interesting in the semifinals of an international tournament

Worst Case: The team stagnates and stumbles into Worlds without noticeable improvement. Everyone takes a vacation—again

H2K also chose to bring back their core players: Top laner Andrei “Odoamne” Pascu and jungler Marcin “Jankos” Jankowski. Fabian “Febiven” Diepstraten developed into a star carry on Fnatic and should do well in lieu of Yoo “Ryu” Sang-ook. The team will be fine on the top half of the map, even against G2.

Worst Case: The team struggles to integrate their Korean members, and with better teams around them, fails to make it to Worlds

Splyce chose to return the same starting five that they used to ascend the EU table last season. They already know how to play with one another and what their win conditions are. They are fantastic in the late game and can really run opponents around the map with split pushing.

The key to 2017 will be getting to their win conditions more consistently. They adapted to the standard lanes meta, but never really thrived, and teams at Worlds exposed their weak laning phase. As we highlighted in our player preview, we think the burden needs to be on Trashy to be a more involved, aggressive jungler. If he can get close to G2 jungler Kim “Trick” Gang-yun’s level, this team could push G2 for the EU title.

Worst Case: They can’t get out of the regional qualifier in a more crowded EU field

Vitality made some of the biggest moves in the offseason, highlighted by landing ADC Pierre “Steelback” Medjaldi and pairing him with Ha “Hachani” Seung-chan, formerly of KT Rolster. If those two can jell quickly and push without getting caught, the duo lane could rival G2’s for the title of Europe’s best.

But they still need a team around them, and Vitality still have to show that they can consistently make the correct team calls. Things never clicked last year as a roster with good players like Lucas “Cabochard” Simon-Mesle and Erlend “Nukeduck” Våtevik Holm fell to 7th in the Summer Split.

Best Case: Steelback is rejuvenated and Cabochard carries the roster to the EU semifinals

Worst Case: The team can never figure out their win conditions and Steelback has flashbacks of the last couple years

Fnatic, Europe’s most storied franchise, stumbled a bit in 2016. Despite hanging on to Febiven and AD carry Martin “Rekkles” Larson, the team was unable to replace stars Heo “Huni” Seung-hoon and Kim “Reignover” Yeu-jin. Team communication and coordination suffered with the new Korean players they brought in.

In 2017, Fnatic will try to enable better communication with an all-EU starting roster. They’ll need it, since none of these players look capable of hard carrying. New mid laner Rasmus “Caps” Winther will be the target of particular scrutiny—he was never the focus for his previous team, Turkey’s Dark Passage. He would often lose lane with little priority, but was more useful in team fights.

Best Case: Rekkles is a star again, Maurice “Amazing” Stückenschneider props up the solo lanes, and Fnatic makes a triumphant return to the EU Finals

Worst Case: Mid lane is an enormous problem and the team falls into the second half of the standings

We originally had Unicorns 4th, nipping on the heels of Splyce. Maybe we were too enamored with their winning performance at IEM Oakland last November. But this team looked ready to take the next step.

And then homesick ADC Kim “Veritas” Kyoung-min announced that he was returning to Korea. Veritas was not UOL’s best (or even second-best) player. But he was an essential part of a team that worked on their communication throughout 2016. Leaving late in the offseason put Unicorns in a tough spot.

They signed Samuel “Samux” Fernández as a replacement, but the move did not build a lot of confidence. Samux has bounced around for some time, but has never really shown LCS potential.

Solo laners Tamás “Vizicsacsi” Kiss and Fabian “Exileh” Schubert have the talent to carry, but this is going to be a tough run through the regular season.

Best Case: Exileh steps up and the roster proves that they are a top-four team with the pieces they have. They make the EU semifinals, proving that IEM wasn’t a fluke

Worst Case: They can’t survive the loss of Veritas and end up in the promotion tournament

Misfits will go through a lot of learning pains as they learn to play at an LCS level. It has less to do with individual skill level and more to do with rotations and shot calls. Top laner Barney “Alphari” Morris and ADC Steven “Hans sama” Liv are exciting to watch and should stick in the LCS.

The question will be whether jungler Lee “KaKAO” Byung-kwon can return to form and whether he and Lee “IgNAR” Dong-geun, both Korean players, can properly shot call for the rest of the team. If the coaches can get this team to talk and be on the same page, even as the game goes late, they have a shot.

Best Case: The players learn to play together, the rookies stand up to better players at their positions, and the team grabs a playoff seed

Worst Case: They make too many mistakes against a higher level of competition and need the promotion tournament to hold on to their new LCS slot

This was a bewildering team last year. After finding mid laner “NighT” Gun-woo out of nowhere, the team went on a tear through the Summer Split. The revamped 2017 roster may not be better, however. Jungler Jonas “Memento” Elmarghichi is serviceable but it’s hard to identify which lane they can win outside of mid.

Best Case: NighT is a top-three mid laner in the region and is able to prop up the rest of the roster to a 0.500 record

Worst Case: The team reverses their progress from last summer and is back in the promotion tournament

ROCCAT has a budding star in mid laner Felix “Betsy” Edling. But the roster is pretty sad around him. The team took chances on a series of unknown players, and there is real threat they could get relegated. The team placed 9th and 10th in the last two splits, and that was with Steelback, who could usually win lane. It’s going to be a battle for ROCCAT to remain relevant all year.

Best Case: They clean up their mistakes and make things interesting in the regular season

Worst Case: The team is lost without Steelback and are relegated

Origen’s free fall continued into the offseason. Unable to keep Paul “sOAZ” Boyer and Amazing, the team totally rebooted. You can’t blame them for not trying, as the team searched hard and wide for new players, including signing mid laner Yoo Nae-hyun out of China’s minor league.

The roster really doesn’t have much of a chance. It combines players that have had a shot at the LCS and failed, with foreign players who may be hard to integrate. It will take a miracle for this roster to learn how to play together and figure out win conditions, especially in the best-of-three setting. It’s been a great run for Origen and popular owner Enrique “xPeke” Cedeño Martínez, but we’re guessing it ends here.

Best Case: The team somehow pulls out another win in the promotion tournament to keep xPeke’s dream alive

Worst Case: The team is relegated after a split and xPeke retires from competitive League and rides off into the sunset