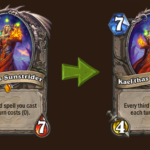 Hearthstone: Scholomance Academy is about to get its first balance update.

Two cards in Standard are getting nerfed, Blizzard announced today. Outside of the Standard format, the Battlegrounds mode is receiving multiple changes. Eight minions are getting adjustments and three heroes are either receiving buffs or nerfs.

Here are all of the upcoming adjustments in Hearthstone:

For Standard, these nerfs to Kael’thas reduce his potential for high rolling and running away with the game as soon as he’s played. Oftentimes, Druid could pull off absurd turns as soon as turn three due to the new Lightning Bloom. While his potential to run away with the game will still be there, players will need to rely on extra mana to do so, making these circumstances a little less likely.

Mindrender Illucia’s nerf is almost seemingly out of nowhere, but her power to dismantle combo decks effortlessly and stall aggressive decks is still apparent. This nerf will allow there to be less cards for the Priest player to use from their opponent’s hand and deck since they’d need to pay more upfront to gain access to this ability. This could be a slight adjustment made in minds of Wild players since Reno Priest is among the best decks of the format and Mindrender Illucia singlehandedly improved those odds by being a card that nullified Priest’s worst matchups.

In Battlegrounds, the minion changes to both Murlocs and Beasts bring up multiple implications to the entire format. With Megasaur gone, Murlocs no longer have a perfect late-game strategy to aim for with Divine Shield in combination with Poisonous. While this would deabilitate any Murloc builds, the buff to Primalfin Lookout to allow it to be found a tier earlier repurposes Murlocs to a more early game, aggressive build players can use. While it’s possible to find Primalfin Lookout a tier earlier, it can no longer find you Murlocs of a Tavern Tier higher than your level. This means that you can’t fish for King Bagurgle or the new Amalgadon until you’re Tier Five and Six, respectively.

The adjustment to Beasts shifts some stats and tiers around to buff more of the archetype and nerf other aspects. The most important buffs are to Pack Leader, which can now be found inside Tier Two instead of Tier Three. This allows players to start scaling their Beast-based board much earlier than usual. Besides tier buffs, there are also some stat buffs found on Rabid Saurolisk and Monstrous Macaw. This follows their Tavern Tier nerfs a couple of patches ago. The most notable nerf to Beasts this patch is found on Rat Pack, which is now the same tier as the Infested Wolf. While Rat Pack wasn’t a weak minion by any stretch of the imagination (and it was instantly better than Infest Wolf after a single +1/+1 buff), finding it a tier later will be a blow to early Beast builds and the Deathwing hero especially.

The nerf to Nat Pagle is also a welcome change since the delta of swing potential he could bring was off the charts. If Nat Pagle spawned a Treasure Chest, it could lead to a chain of Deathrattles that would sometimes kill the opponent, even during rounds where they had no business losing. The new Nat Pagle has no tempo in the battle phase but gives players an opportunity to find more value during the recruitment phase by finding potential pairs and triples.

The changes to the Battleground heroes are also anticipated after being mentioned in a recent AMA. Captain Eudora was undisputedly the best hero in Battlegrounds when played correctly. This nerf will delay her power turn by one, which forces players to take more damage if they try to reach her swing turn as soon as possible.

The buff to underperforming heroes like Reno, Lich King, and Galakrond also gives potential to a more diverse meta. The buff to Lich King’s Reborn Rites lets players win a lot more combats earlier without investing any gold to nearly guarantee a win. Reno’s buff also gives players a chance to improve their board without losing tempo by spending gold using a Hero Power instead of buying minions or leveling up. Galakrond’s buff to his Hero Power allows its user to not need to freeze the entire board when choosing to evolve a minion. This lets players search for other minions without needing to obstruct the purpose of the Hero Power.

Overall, these massive changes to the current state of Battlegrounds will give a fresh new take on the meta before the eventual next anticipated Battlegrounds feature arrives.

Hearthstone Patch 18.0.2 comes out soon an undetermined day of this week.