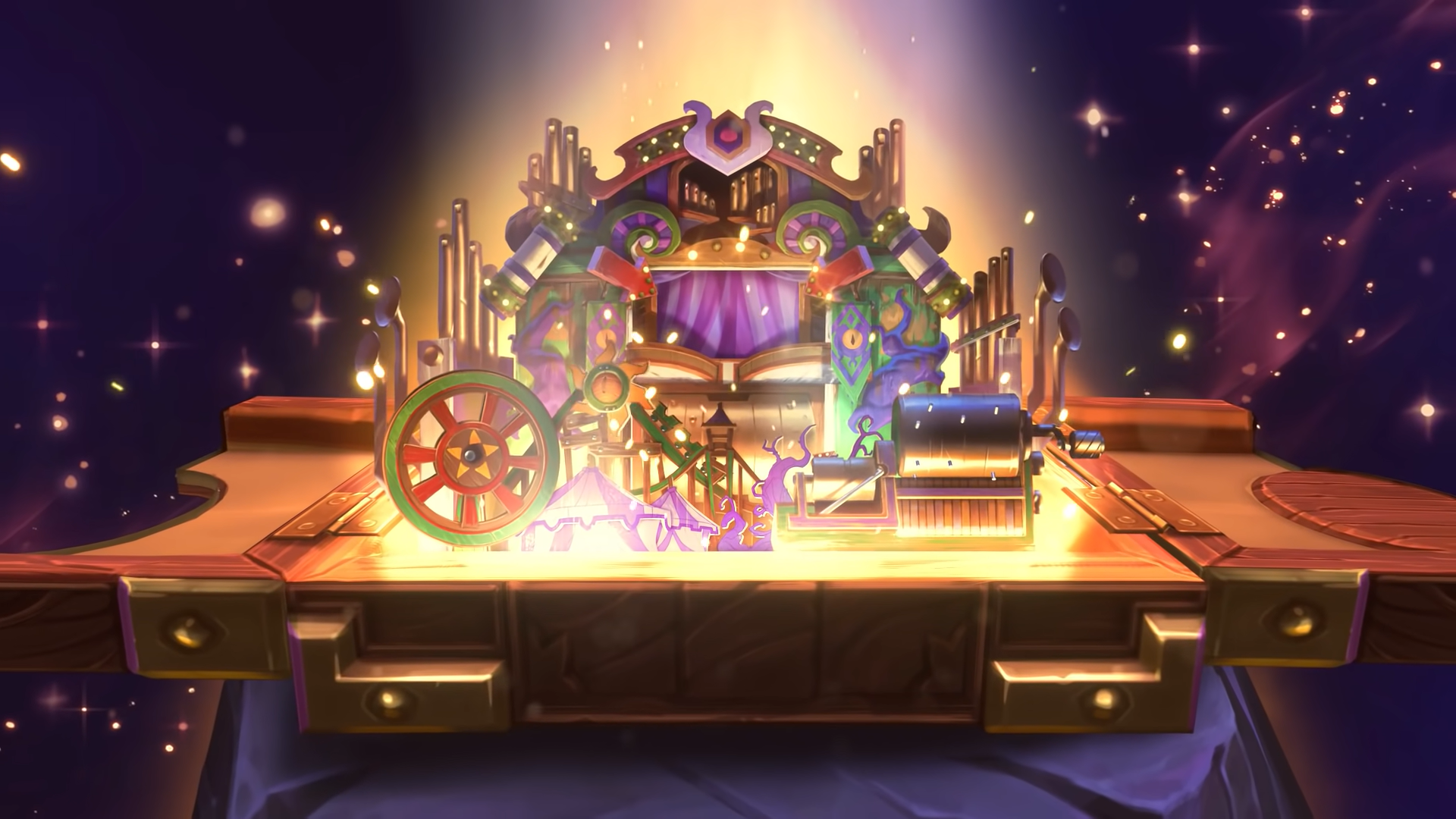 Similar to the Galakrond’s Awakening mini-set from last year, there will be an imbalance of classes receiving different rarities. Some of the cards will use mechanics from the two expansions outside of Madness at the Darkmoon Faire, while keywords from two expansions can be combined, like Imprisoned Celestial.

Players looking to add these cards to their collection can do so either by opening Madness at the Darkmoon Faire or by purchasing the entire set in the shop with either 2,000 gold or $14.99 once the expansion drops on Jan. 21.

Here are all of the cards that have been revealed for The Darkmoon Races. 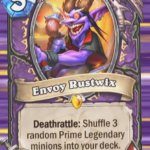 This Warlock card is one of the four legendaries being added to the mini-set. Rustwix’s effect is tied to Ashes of Outland. He appeared in the Felfire Festival cinematic and is tied to the Prime minion mechanic. After his death, he shuffles three random Prime legendaries, unknown to both you and your opponent, into your deck.

A five-mana 5/4 minion with a greedy value Deathrattle may have trouble finding competitive viability. While there are a couple of powerful Prime results, like Kargath or Solarian, there are a few low rolls to be mindful of, like Akama or Vashj. In a potentially hilarious result, there’s always the chance for Kanrethad Prime to provide infinite value since you can constantly revive Rustwix with his ability. But this likely won’t be relevant.

This Rogue-Mage Dual-Class card is the second legendary to be added to the mini-set. Ivory’s Battlecry lets you discover a spell from any Dual-Class combination. In addition to this value ability, if you manage to activate Spellburst with Keywarden Ivory, she’ll provide you with an extra copy of the Discovered spell.

There are 23 different results right now, meaning attaining consistency with this card will be difficult. Some notable results from her include Lightning Bloom, Coerce, and Brain Freeze.

While she may not find an immediate home in current top-tier Rogue and Mage lists, there’s an opportunity for her to slot into Highlander lists for either class.

This Shaman spell is a powerful Control Shaman tool that’s similar to Immolation Aura and Maelstrom Portal. While dealing one damage twice to only opposing minions can be achieved while Overloaded, the payoff will stave off most early aggressive boards. 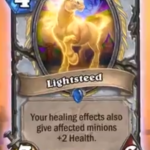 These two cards were the first to be revealed after the mini-set’s initial announcement. Lightsteed is a Priest card with stats that are strong for its cost and the potent ability to maintain the board if you can keep your board strong. While it’s unknown if overhealing will activate the effect, Lightsteed can serve as a tool for the weak Tempo Priest list.

The Imprisoned Celestial combines mechanics from both Ashes of Outland and Scholomance Academy. Imprisoned Celestial synergizes well with aggressive Paladin lists since playing this on turn three after developing a wide board will give all of your minions Divine Shield, making them exceptionally difficult to remove. 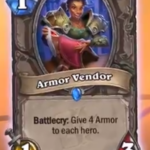 Barricade is a Paladin-Warrior Dual-Class card that can help develop 4/8 stats worth of Taunt from a single spell if you don’t have a board before playing this card.

Armor Vendor is a neutral minion that’s similar to Zombie Chow and Mistress of Mixtures. They’re one-mana minions that benefit you and your opponent while helping you develop an early board. 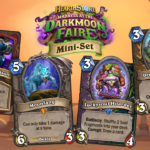 The majority of the cards from the third reveal use the Corrupt keyword from Madness at the Darkmoon Faire meaning they gain their full power if you can play a more expensive card while it is in hand. Nitroboost Poison is a Rogue-Warrior Dual-Class that can give a minion +2/+0, but if it’s corrupted it also powers up your weapon by the same amount.

Luckysoul Hoarder is a three mana 3/4 Demon Hunter-Warlock Dual-Class minion that has a Battlecry which shuffles two Soul Fragments into the user’s deck like the other Soul Fragments from Scholomance Academy. If it’s Corrupted, it also draws a card, maintaining card advantage.

Dreaming Drake is a simple three mana Druid minion that has 3/4 stats and Taunt. Once it’s Corrupted, the Dreaming Drake gains +2/+2 stats, making it beyond efficient for its mana cost.

While Moonfang isn’t safe from removal like Polymorph or Assassinate, the new legendary can stay on the aggressive while needing multiple ping effects to be efficiently taken down.

Rally is an intriguing aggressive take on Ressurection-style cards that try to accrue massive value by reviving exclusively big minions. Summoning three minions after an early curve could allow for strong tempo plays for both Priest and Paladin.

Sparkjoy Cheat and Shenanigans help add to Secret Rogue’s repertoire. Sparkjoy Cheat has the power to play two mana worth of a card while drawing a card, maintaining card advantage. While it is unknown how Shenanigans will interact with “Cast When Drawn” cards, the ability to turn an opponent’s useful card into a banana can disrupt strategies in a hilarious way.

Spiked Wheel is a strong controlling weapon that is nearly comparable to the old Fiery War Axe if you can manage to play this card on curve.

Saddlemaster is identical to Whirlkick Master in the way that it conjures Beasts whenever you play a Beast, meaning you can string together a long chain of value if you’re lucky.

Conjure Mana Biscuits allows Mage to spend mana upfront to set up for future combo turns by refreshing two mana crystals. An important aspect to take note of is that the Biscuit does not add onto mana, allowing you to cheat cards into play sooner than expected, it only allows you to play multiple cards in a single turn.

Mistrunner is a midrange Shaman card that can buff up one of your minions into a medium-sized threat. The stats provided are 7/7 total for five mana upfront, and an Overloaded mana crystal the following turn.

Guidance is a Druid-Shaman Dual-Class minor value card for one mana that can provide either one or two random spells to your hand depending on if you Overload your mana the following turn.

Resizing Pouch is a curve fulfilling Druid-Hunter Dual-Class card that can convert your mana into a potentially strong card at any stage in the game. Allowing you to either use it early to fill in your mana curve or a late game threat depending on when you draw it.

Runaway Blackwing is comparable to Ragnaros the Firelord in the past. While Ragnaros had the ability to hit face with its end of turn ability, Runaway Blackwing has the chance to perform natural attacks when your arrive at your turn again.

Felfire Deadeye is a Demon Hunter-Hunter Dual-Class card that reduces the cost of your Hero Power by one mana. In Demon Hunter, this makes the hero power effectively free, and in Hunter it pairs up well with Inspire-styled cards that want you to use your Hero Power.

Illidari Studies is the sole Study-style card to be included into this list. Compared to other Studies, this one may have difficulties in gaining the true combo potential out of them. This is due to the fact that any Outcast card you discovered will need to be played soon, because every card drawn after your Discover will prevent the discovered card from being Outcasted from the right-side of your hand.

Backfire is more refuel for aggressive Warlock style decks that enjoy using Darkglare. The three damage taken allows you to get a return on your mana, giving you a chance to play some of the cards drawn. 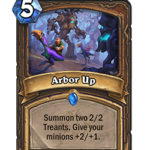 These cards were the final ones to be revealed after the Twitter teasers. Arbor Up has potential with Token Druid due to the board wide buff it brings. Bola Shot is potent early removal against aggressive decks. Glacier Racer combos well with Frost Nova, Blizzard and Ray of Frost.

Aside from making Corrupt cards easier to play in quick succession, Dark Inquisitor Xanesh makes it easier for your Corrupt cards to reach their true potential due to their cheaper cost.

Hearthstone: The Darkmoon Races is releasing on Jan. 21 and the 35 new cards can be obtained either through Darkmoon Faire packs or in the shop for $14.99 or 2,000 gold.