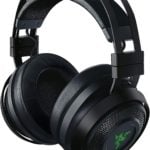 Each game title offers a unique graphical and audio experience. While the visuals are the first feature players notice when checking out a new title, soundtracks and voice actors essentially form a game’s soul.

Your enjoyment of a game will significantly decrease if you’re playing on mute, and using the best headsets the money can buy will take your gaming experience on Xbox Series X/S to another level. While a cheap set of earbuds may feel enough, you won’t notice what you’ve been missing until you put on a top-of-the-line gaming headset.

Gaming headsets take pride in their ability to isolate the outside noise. Once the noise isolation gets combined with decent sound drivers, you’ll start feeling like you’re actually inside the game you’re playing. In addition to making your gaming experience more enjoyable, gaming headsets will also increase your chances of winning in competitive titles like Fortnite, Call of Duty, Apex Legends, Rainbow Six Siege, and any other competitive title where hearing well makes a difference.

With a decent gaming headset for your Xbox Series X/S, you’ll have a better understanding of what’s going on around your character while playing. An increased level of awareness will help you make better plays, which can drastically increase your win-rate in your game of choice.

The following headsets feature an excellently balanced sound quality and come with a crisp microphone. Considering communication is key to survival in most online titles, a clear microphone will be essential to both give and receive information from your teammates.

Here are the best headsets for Xbox Series X/S that will help you stand out from the rest of the leaderboards. 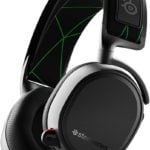 The SteelSeries Arctis 9X has an outstanding out-of-the-box sound profile. Even though it only has 40mm drivers, the sound quality is top-notch, and the advertised 20+ hours of battery life is long enough to withstand a couple of gaming sessions. It’s impossible to be disappointed with the overall sound quality Arctis 9X offers while gaming, but you may need to resort to a more audiophile-grade headset for listening to music and watching content since there will be a noticeable difference. Gaming headsets are usually designed to make quieter noises louder, so they tend not to be the best candidates for consuming content.

The headset also boasts a noise-canceling microphone. The microphone is relatively successful at blocking background noises, making your voice clearer in parties and online lobbies. The microphone isn’t removable, but it’s completely retractable, meaning it won’t stand in your way if you’d like to pack or use your Arctis 9X as your daily driver.

Another aspect that makes the Arctis 9X great is its compatibility with other devices. The headset can connect to phones, tablets, and laptops via Bluetooth, and you can even plug it into devices via a 3.5mm connection. Doing so will make some of its wireless-only features impossible to use, but it’ll always be a nice feature to have if you ever forget to charge your headset. 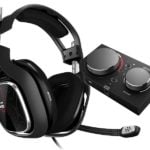 Modern wireless headsets are almost as good as their wired counterparts. Though it’s impossible to notice it, there will always be a slight delay, even if it’s for a fraction of a second. Even though you won’t be able to tell the difference in 99.99 percent of the case, some gamers find it comforting to know that they’ll always have an input lag-less experience no matter the game they’re playing.

The Astro A40 TR is a decent headset by itself, but the addition of a MixAmp will allow you to get creative with your sound settings. The headset’s default sound profile is slightly bass-heavy, which is decent for capturing the epic environmental effects of any game. It may not be everyone’s cup of tea, however, and the MixAmp will let you explore what works for you and the game you’re playing.

The open-back design makes the Astro A40 TR more breathable than its competition, but it also means that it leaks a decent chunk of what you hear. The padding also blocks noticeably less noise, but the maximum levels are more than high enough to make up for it.

The microphone quality is up there, and it cancels out most environmental sounds like the static you’d hear on lower-tier microphones. 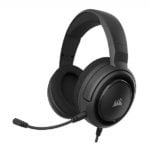 It’s quite difficult to tell the difference between high-tier gaming headsets since most of them max-out their specs after a certain price point. When you’re shopping with a low budget, it’ll be more about finding the best value. In the lower trenches of the competition, it’s all about making sacrifices.

Corsair HS35’s price-performance ratio is off the charts since it blows its competition off the water with its decent sound quality supported by 40mm drivers. Headsets in the H35’s price range usually suffer from low-quality microphones, which turns communicating into a struggle, but the microphone on the HS35 is good enough to punch above its weight. The microphone is also detachable, meaning HS35 can turn into your daily driver if needed without any problems.

Though you’ll only have access to stereo sound, the headset makes up for it in the comfort department. The memory foam ear-cups makes it feel like you aren’t even wearing a headset during long gaming sessions.

The HS35 is compatible with any device that has a 3.5mm input, meaning you’ll need a converter to use it on phones and laptops without headphone ports. 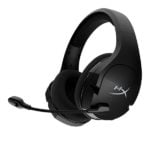 The Corsair HS35 isn’t the only budget king available in the market. HyperX is also up there, and the Cloud Stinger is another reliable option to consider if you’re shopping on a budget.

Both the HS35 and the Cloud Stinger come with 40mm drivers, so if you’re in-between picking them, the most vital factor will be the fit. Trying them in a store or ordering them both to see which one works out for you better can help you tremendously in your search for the best budget headset for your Xbox Series X or S. 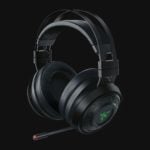 Hearing in-game sounds is one thing, but what would you think about actually feeling them around your head? Razer Nari Ultimate is a wireless headset that separates itself from the competition with its haptic feedback feature.

While it may sound like a gimmick, the vibration motor inside the headset is perfectly balanced and not uncomfortable at all. The vibrations aren’t delayed at all, and they practically kick-in when you start hearing a noise that’s vibration-worthy. Considering its haptic feedback feature, which should be a battery log, the battery life is quite decent.

The headset’s 50 mm drivers ensure an excellent sound quality, and the wireless connectivity is one of the best out there. The range on Razer Nari Ultimate is insane, but you should still prefer sitting close just to make sure you play with close to zero input lag.

Razer Nari Ultimate ships with a microphone that you wouldn’t expect to see in its price range, however, and its quality is average at best. Though this is usually a huge drawback, the sound quality and the haptic touch feature makes it easier to justify the cons.