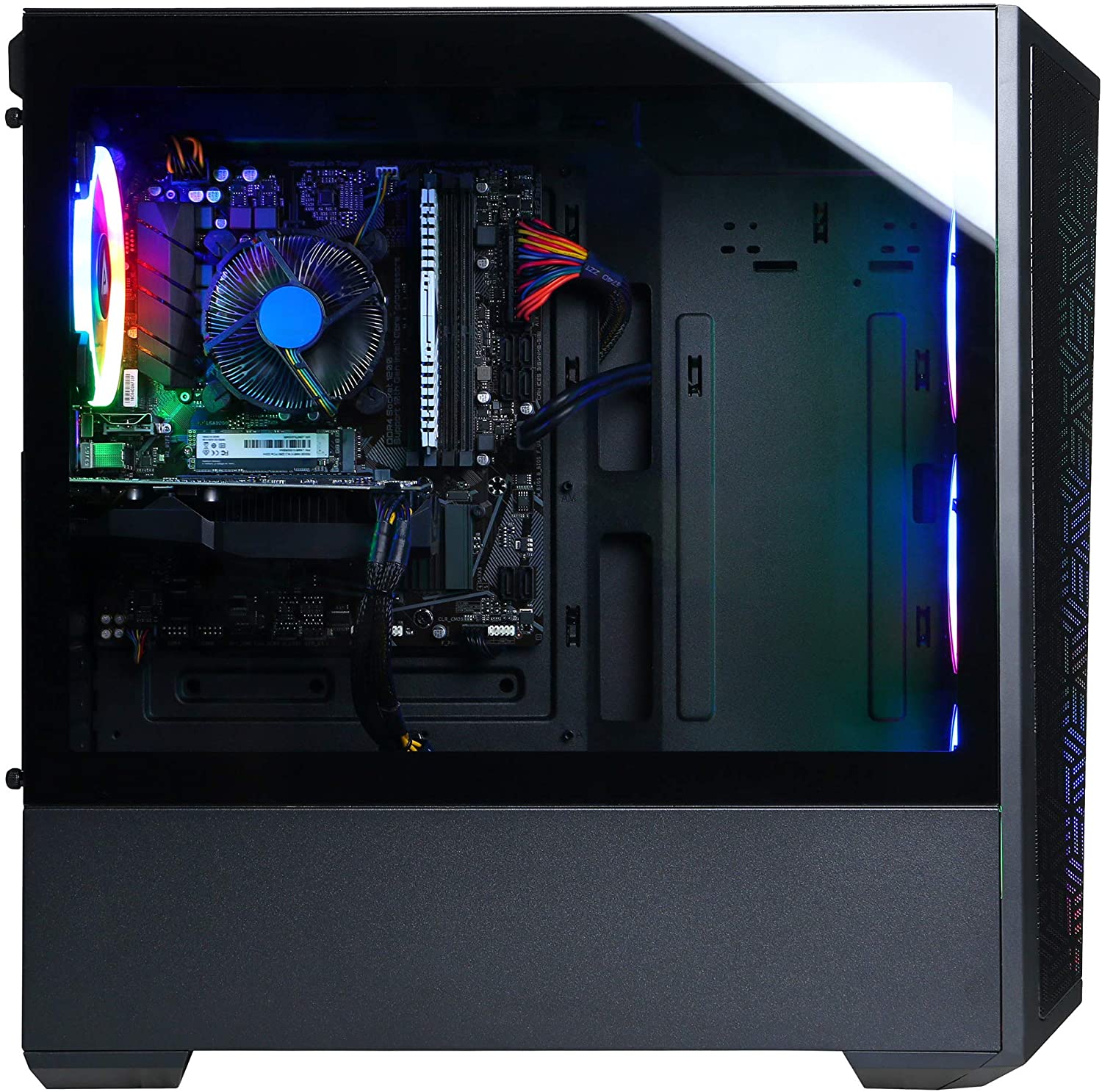 Finding the best gaming gifts can be a stressful, tedious task, but it doesn’t have to be. Instead of going through the guesswork of picking out a selection of games, peripherals, and software to gift to the gamer on the list, go straight to the source with one of the top 10 best pre-built gaming PCs on the market.

Pre-built gaming PCs are not only a lifesaver for those who can’t build a PC from scratch, but they can also be a cheaper alternative to custom builds, thanks to the unfortunate GPU prices. That said, the pre-built PC market is rife with overpriced junk and poorly made rigs. For the gaming PC with the right power for your budget, here’s a list of quality pre-builts.

Where expenses and computing power start reaching their peak.

Asus’ ROG Strix GA15DK has some incredible upsides that are hard to ignore, but it also has its share of pitfalls.

The GA15DK features a Ryzen 7 5800X alongside an RTX 3070. These two extraordinarily powerful components are enough to run any game in existence at high settings above 60fps. It also features 16GB of DDR4 RAM and 512GB of SSD storage, which is complemented by a terabyte HDD.

The bad is found when checking out how the GA15DK cuts corners to reduce cost. Admittedly, it is rare to see a pre-built PC with this much power under $2,000, but the case it comes with has a reputation for having poor airflow. On top of that, the CPU air cooler is suitable for gaming but isn’t recommended for anyone who plans on overclocking their CPU.

The Chromos Gaming PC is almost identical in performance to the GA15DK, but with some minor adjustments. Both PCs feature the same GPU, but the Chromos features a slightly weaker CPU in the form of the Ryzen 5 5600X.

Skytech’s Chromos also features 16GB of DDR4 RAM on top of a terabyte M.2 storage device, which can be slightly more enticing than sharing storage between an SSD and HDD. Between the RGB fans that provide the case with various colors and the marginally better airflow within the case, the Chromos is an ideal high-end option for those who don’t feel like upgrading any components after booting up.

The Omen 30L succeeds in providing some of the most powerful components on the market, but it cuts corners in its included storage devices. With an RTX 3080 GPU and an i9-10850k CPU complemented by 32GB of DDR4 RAM, it would take a bit of searching, and a ton of cash, to come up with anything better than this pre-built PC in terms of gaming power. This Omen PC will run any game at any settings at high frame rates.

Anyone who purchases the Omen 30L will need to keep on the storage devices, though. The 2TB of storage is a great amount that will suffice most gamers’ storage needs. But those 2TB drives are contained in HDD format, not an SSD. This means the data on that hard drive will read slowly and die with the hard drive in three to five years. Aside from that issue, the Omen 30L is a beast of a machine and will tackle any game, any time.

Mid-range pre-builts make up the bulk of what many gamers use today and represent a solid price-to-performance ratio that creates an enjoyable gaming experience from day one. Going with a mid-range pre-built also adds additional future-proofing through the use of higher quality products in comparison to budget builds.

A Ryzen 5 3600 and an Nvidia GTX 1660 make up the bulk of the price on this particular pre-built. GPU prices are high at the moment, so any option for a shopper to grab a decent pre-built PC with a competitive GPU at a reasonable price should be considered thoroughly.

With a 500GB SSD and 8GB of DDR4 RAM, this particular pre-built gaming PC will run games like League of Legends and Fortnite at well over 60fps. And with some careful storage management, can be left by itself without needing any additional upgrades for some time to come.

For those looking to acquire a strong mid-tier gaming PC while also keeping their budget within reason, CyberpowerPC’s Gamer Xtreme pre-built PC offers a reasonable CPU in the i5-10400f alongside a GeForce GTX 1660 Super. These specs will handle every game contemporary title to varying efficacy, but the included 8GB of DDR4 RAM will prove lacking in some scenarios.

Coming by a solid GPU is an expensive, and sometimes impossible, task these days. This PC features a GTX 3060, an i5 CPU, 16GB of DDR4 RAM, and 512GB of SSD storage. Although dipping into the pricier range, this pre-built’s GPU is a strong performer in the gaming world today and will future-proof the recipient’s gaming needs for the next three to five years.

Among all of the SkyTech pre-built PCs, the Archangel 3.0 is likely the most cost-efficient before stepping out into the high-end PC range, where $100 only gets you a marginal increase in performance. Similar to the Blaze II, the Archangel comes equipped with a Ryzen 5 3600. The Archangel gets an upgrade in the form of an RTX 3060 on top of 16GB of DDR4 RAM.

If the gamer in your life is looking to play all of the contemporary AAA titles available at mid to high settings, the Archangel 3.0 will work perfectly.

If the gamer in your life is keen on playing popular esports titles, such as CS:GO, Fortnite, or League of Legends, then a budget prebuilt gaming PC is not only the cheapest option available but also has the computing power necessary to handle modest gaming. These PCs are base platforms that lend themselves to those who are building a budget for future upgrading.

First on the budget entry is a prebuilt gaming PC that functions well for the gamer who’s new to PC gaming. This MXZ pre-built comes equipped with a Ryzen 3 3200G and 8GB of DDR4 RAM clocked at 3,200MHz. For the games that run the esports community, such as League of Legends, these specs are more than powerful enough to maintain 30 to 60 frames per second (fps).

As a cherry on top, this rig is primed for upgrading since the Ryzen 3 3200G takes the need for a dedicated GPU out of the equation. Stick any half-decent GPU in at a later date for increased performance.

To call the Aspire strictly a gaming PC would be disingenuous. The i3-9100 functions similarly to the MXZ’s Ryzen 3 3200G, except that its onboard graphics are marginally less powerful. This means that the Acer Aspire will get worse performance than the MXZ entry, but will benefit more from a dedicated GPU upgrade in the future. In short, the Aspire is less gaming than media browsing, but can still do both on a thin budget until upgrading is within the budget.

The Aspire functions well as a generalist’s computer and will still run all common esports titles above 30fps with some lowering of the graphics settings. The Acer Aspire also features a 512GB SSD, which not only provides a decent chunk of storage but will last its user for around seven years.

With a Ryzen 5 3600 CPU, a GeForce 730 dedicated GPU, and 8GB of DDR4 RAM, this iBUYPOWER gaming PC is easily the most powerful budget PC on this list. This budget iBUYPOWER rig will not only tackle most popular esport titles with ease, but it can even handle more graphically intensive games, such as Grand Theft Auto V and The Witcher 3, at 30 to 60fps.

The iBUYPOWER Pro Gaming PC comes with RGB fans, which give a colorful aesthetic that may only appeal to certain gamers. On top of the polarizing design, its storage is down to only one 240GB SSD, which may not be enough for some gamers and will need to be met with an additional storage unit.