There are many different weapon types in Elden Ring. Each boasts its own unique attributes, scaling, moveset, and weapon art. With short-ranged daggers, colossal greatswords, magic staves, and a mix of bows and crossbows, FromSoftware offers a lot of options for Tarnished to choose from to dominate their foes across the realm of Lands Between.

One choice that players have been looking for in particular is the Banished Knight’s Halberd +8. Halberds are a unique combination of thrusting attacks and wide-sweeping swings. This long pole-arm weapon type balances long reach with above-average damage output and is available fairly early on in Elden Ring. It’s a great starting weapon type for newer players to get their hands on.

The opportunity to get a +8 reinforced weapon early in the game will make players’ lives a lot easier at the beginning of their journey through the Lands Between. 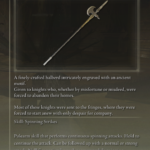 Where to find it

The Banished Knight’s Halberd can be obtained in a couple of different ways. The first option is farming the weapon off of Banished Knights that are using a halberd in Stormveil Castle. The second option is killing the NPC Edgar in Castle Mourne or Edgar the Revenger, who invades the player at the Revenger’s Shack just north of the Erdtree after completing Edgar’s questline. 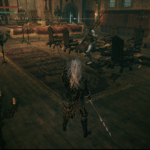 The knights in Stormveil Castle have the chance to drop a non-upgraded version of the Banished Knight’s Halberd. These knights will be two-hand wielding the halberd as opposed to the sword and shield knights that are also spread out around the castle.

For those not looking to farm the item off of the knights in Stormveil Castle, there’s another option. This involves killing the NPC Edgar in Castle Mourne or the NPC invader Edgar the Revenger.

If players aren’t interested in questing and don’t mind ending a questline before it starts, killing Edgar at Castle Mourne is a quick option. 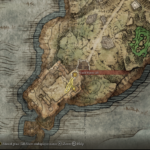 The non-invader version of Edgar is found within Castle Mourne on the Weeping Penninsula. He is located at the top of the northwest tower of the castle. Once you find him, simply kill him and he will drop the Banished Knight’s Halberd +8, the upgraded version as opposed to the non-upgraded version the Stormveil Knights will drop.

For those not looking to farm or kill an NPC that ends a questline, the other option is to finish Irina and Edgar’s questline. It is a rather quick questline that’s finished by being invaded by the revenging version of Edgar at the Revenger’s Shack just north of the Erdtree in west Liurnia.

To complete the questline, talk to Irina on the pathway to Castle Mourne and deliver her letter to Edgar inside the castle. Edgar will say he can’t let the Misbegotten steal the Grafted Blade Greatsword. Defeat the Misbegotten located on a small sandbar behind the castle and return to Edgar. He will thank you and go back to Irina. Return to Irina to find Edgar weeping over Irina’s body. He will swear revenge against the Misbegotten. After this, if the player goes to the Revenger’s Shack, they will be invaded by Edgar the Revenger. Defeat him and receive the Banished Knight’s Halberd +8.