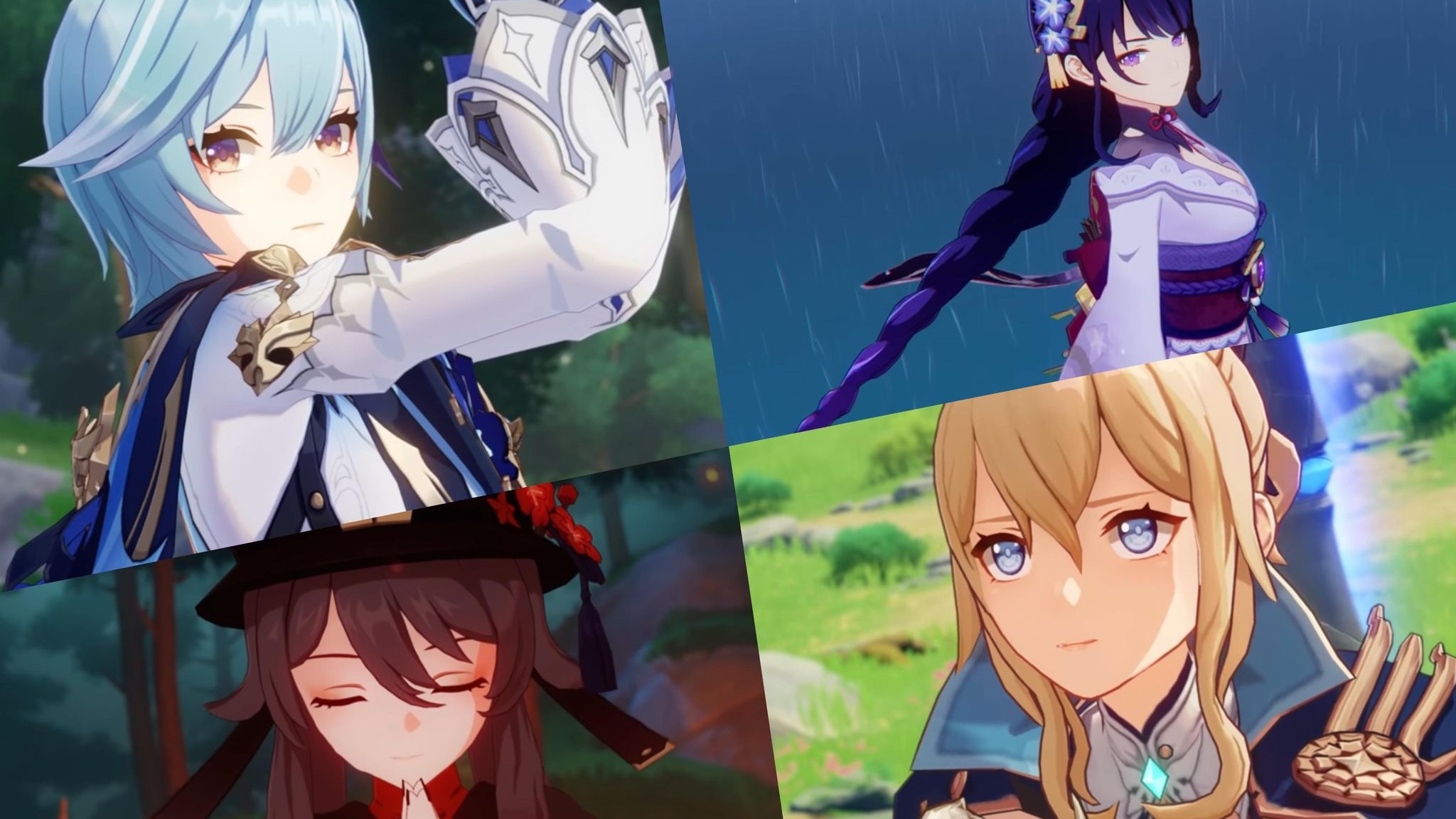 One of the best aspects of Genshin Impact is the compelling, powerful, and complex characters players can meet and play as during their expeditions across Teyvat. There are many characters to choose from and it can be hard balancing these factors to choose who you want to spend your hard-earned Primogems on.

Here are some of the most iconic female characters in Genshin Impact based on a balance between their stories, abilities, design, and personalities.

The five-star Cryo “Spindrift Knight” is the Captain of the Knights of Favonius Reconnaissance Company and a favorite among Genshin Impact players. Her cool, elegant, and dauntless demeanor is matched with an equally impressive movement style and effective skillset. Eula also boasts an overall stunning, unique look that quickly won over the hearts of Genshin players long before her official release in May 2021.

Eula’s Cryo abilities are some of the best in all of Genshin Impact and her physical damage output is high. Her agility is also unmatched among Claymore characters as she is the only Claymore character able to move very quickly while wielding a massive blade to deal massive amounts of damage.

The almighty Shogun arrived in early September 2021 and brought a steely, cold, and formidable foe unlike any other for players to face off with as the Traveler. The Raiden Shogun rules over Inazuma with a desire to pursue eternity for her nation.

Raiden Shogun is a stunning Electro force to be reckoned with. She also boasts a complex backstory and at first seemed to be a cold villain with two identities who began a Vision Hunt decree that cost many their Elemental abilities. Following the Traveler’s arrival, players helped Inazuman citizens regain their Visions and discovered the true character Ei lying beneath the front fake puppet that is the Raiden Shogun.

The five-star Electro Polearm character’s overall intriguing story and striking appearance are accompanied by a powerful Electro skillset that deals high levels of damage and uplifts the rest of the party with helpful boosts. She also has an appearance that is a favorite among Genshin players due to her stunning long violet braid and overall Electro purple-themed appearance.

The Pyro Polearm character is always accompanied by her ghostly friend and enchants players with her constant singing of her signature song which goes, “Silly-churl, billy-churl, silly-billy hilichurl.” Her overall personality and look are eccentric and fascinating, which makes her a top pick among the Genshin community. Hu Tao also serves as the current Director of the Wangsheng Funeral Parlor, which is located in Liyue.

Hu Tao’s distinctive look and temperament are matched by an equally unparalleled set of abilities. Five-star character Hu Tao uses her polearm and Pyro abilities to ignite the battlefield and eliminate her enemies. Her abilities also drain her Health Points, but this too makes her more compelling as it fits in with her being the Director of a funeral parlor and having a ghostly friend as well as creating a unique challenge for players hoping to utilize her powerful skillset.

Five-star Hydro Catalyst character Mona has a witchy aesthetic to her appearance and skillset that is generally regarded as a favorite among Genshin Impact players. Mona is a skilled astrologist who is highly intelligent but also quite prideful.

Her Hydro abilities are also among the best available of any support character. She helps recharge her teammate’s abilities while also easily applying the Hydro effect to all she comes into contact with. Mona also has a unique cloaked sprint that allows her to traverse right over any body of water.

The half-qilin Adeptus character boasts one of the most unique appearances and powerful skillsets in all of Genshin Impact. Part of what makes Ganyu so impressive is the fact that she is a Bow character who can deal up close damage rivaling that of characters wielding weapons meant to inflict heavy damage, like Polearms of Swords, while also still being able to effectively fight from a distance away as is the usual mannerism for Bow characters.

Ganyu is generally quiet and focused in her day-to-day life but always strategic and smart when it comes to battle. She is the secretary of the Liyue Qixing and has served tirelessly for thousands of years. Because she gives everything she does her absolute all, Ganyu is often exhausted and tends to keep to herself as she has no time for relaxation or friendships.

Perhaps the cutest character in all of Genshin Impact is Klee, a walking bundle of pure Pyro chaos. Klee is talented at creating explosives and used her knowledge alongside her Pyro abilities to exact utter havoc. Her energetic and charming personality makes her beloved by all despite the antics she causes wherever she goes.

The Pyro child is currently placed under the care of the Knights of Favonius in Mondstadt. This means she can regularly be found being disciplined by Jean, who is her primary caregiver, or learning from Albedo, who is a sort of older brother figure in her life.

Klee is an efficient and strong Pyro Catalyst character. In addition to her Pyro abilities, which are quite useful for creating Elemental Reactions and dealing high levels of damage on any team, Klee also runs, moves, and speaks in a gleeful, childlike way that is sure to make any Genshin Impact player smile.

The fearless, kind-hearted Acting Grand Master of the Knights of Favonius is undoubtedly one of the best female characters in Genshin Impact in every way. Her dedication, immense compassion, and all-around chivalry make the Anemo five-star a very compelling character. Jean’s ability to find the time and means to always help anyone in need help make Mondstadt the great City of Freedom it is.

When it comes to her battlefield prowess, Jean is often overlooked in favor of other five-star characters. Her impressive healing abilities are arguably the best in all of Genshin Impact and she makes Anemo Elemental reactions an absolute breeze, however. Her sword prowess is certainly not something to be overlooked either as in addition to dealing effective damage Jean also has a 50 percent chance to slightly heal herself and her allies with every hit.

The Pyro five-star Bow character has an explosive personality and uses her fascination and work with fireworks to bolster her own combat abilities. Yoimiya is the current owner of Naganohara Fireworks in Inazuma and is beloved by all due to her outgoing personality and creative fireworks.

Yoimiya’s Pyro abilities are dynamic in combat and her Elemental Burst helps bolster the rest of the team’s Attack output. She is an overall solid recruit for any team and her unique firework animations are an absolute blast to look at.

She has a pure, sweet heart that contrasts starkly with her icy Cryo abilities. Kamisato Ayaka is undoubtedly one of the best characters in all of Genshin Impact as she applies Cryo wherever she goes and boasts a unique cloaked sprint that allows her to travel over water while also freezing it. The balance between her kind personality and her excellency on the battlefield makes Kamisato Ayaka one of the best characters all-around in Genshin Impact.

Five-star Electro Catalyst character Yae Miko is a fascinating character with many responsibilities and many aspects to her personality. Yae Miko is a Kitsune, which means that her true form is that of a fox. She oversees the Grand Narukami Shrine to ensure its protection and runs the Yae Publishing House to demonstrate her love for learning and books. Yae Miko is also technically the Raiden Shogun’s pet since she is truly a fox and the Raiden Shogun is her master.

The Electro Catalyst character is mischievous and enigmatic both in her personality and on the battlefield. Her powerful Electro abilities feature foxes to honor her true Kitsune form and Yae Miko is an all-around intriguing character that Genshin Impact players will find fascinating to know and effective to recruit for their rosters.