The second week of Fortnite Chapter two, season four is here, and a new set of quests have gone live to help players level up their Battle Passes. This season’s Battle Pass is loaded with Marvel cosmetic skins and items, making it one of the most prestigious ones yet.

The beginning of the season featured Wolverine, Groot, Iron Man, Doctor Doom, Mystique, She-Hulk, and Storm teleported to the Fortnite world by Thor. The team made up of heroes and villains will be going up against Galactus throughout to season with a little help from Fortnite characters. Players will also need to complete the “Awakening challenges” of all heroes to unlock their superpowers since the teleportation process caused them to lose their abilities temporarily.

The awakening challenges unlock via the Battle Pass as well, which makes the weekly challenges, and the Punch Cards even more valuable. One of the eight quests of this week requires players to dance on top of three Sentinel heads. Though the quest sounds relatively easy, finding the Sentinels on the map can be difficult if you haven’t had the time to explore the new Fortnite map.

Where to dance on top of Sentinel head in Fortnite Chapter two, season four? 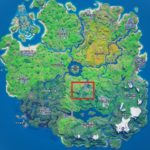 Considering you’ll need materials to build your way up, tackling this challenge in the Team Rumble game mode can be ideal for saving you time. Each player starts with 150 materials of each kind in Team Rumble.

Building a small box around you while completing this quest is also recommended since heads of the Sentinels are entirely in the open, and dancing on one of them can quickly get you killed.

While you’re at the area, you can also launch off a Sentinel hand and complete a Punch Card quest in the process.