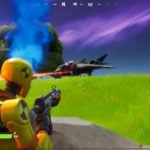 Fortnite Chapter Two, season four hit the live servers earlier today and brought a new set of challenges with it. Completing these quests will reward players with XP toward this season’s battle pass, which is filled with superheroes and villains. Household names like Wolverine, Iron Man, She-Hulk, Storm, Groot, Thor, and Doctor Doom are all waiting for players to unlock them at their respective battle pass tiers.

The first week of challenges looks to be a bit complicated compared to last season’s straightforward quests, but they should only take a couple of hours to complete if you know where to look. One of this week’s challenges requires players to eliminate five Stark Robots at Quinjet Patrol landing sites.

Though the task sounds easy at first, locating Quinjet Patrol landing sites can be challenging if you aren’t familiar with them just yet.

Where are the Quinjet Patrol landing sites in Fortnite Chapter Two, season four?

To complete this challenge, you’ll need to keep your eyes open from the beginning of the match. The Quinjets will be tailing the battle bus while players are getting ready to drop into the map and they all have a pre-set destination.

Each jet will land somewhere different in every match and you’ll need to follow them with your glider. The place they land is essentially a Quinjet Patrol landing site and destroying the robots there will net you 25,000 XP.

If you lose track of them, the Quinjets will release a visible blue smoke once they land, making them relatively easier to spot from all angles. There will be plane icons on your map as well, which should help you find them even after some time passes in the game.

Keep in mind that Stark Robots are armed to the teeth and can shoot you down before you realize what’s happening. Looting up before making your way to the landing site can be ideal. Stark Robots have a chance to drop a new weapon named “Stark Industries’ Energy Rifle.” Turning robots into loyal followers is also an option instead of destroying them, but it won’t count toward completing this quest.

Destroy five robots before attempting to hack one and also consider checking inside of the Quinjet since there will be a couple of Loot Chests waiting for you. If you get an Energy Rifle during the process, try to deal as much as damage with it to enemy players since it’s another weekly challenge that you’ll need to complete throughout the season.