Optimizing Fortnite with the game’s settings is key to climbing up the battle royale’s ranks. The right configurations will help you locate enemies faster and allow you to perform better.

The settings interface can look complicated since there are countless options to choose from. But the Xbox One port of Fortnite offers significantly fewer customization options compared to the PC version to avoid overwhelming new players.

While you won’t be able to change how Fortnite looks by adjusting graphical settings, you can modify the way you play the game by adjusting your controller settings and changing how to interact with the game. Considering you’ll build your muscle memory as you continue to play Fortnite, having settings that are just right for you will be important to make sure you settle with the right combination.

The following options are optimized for the best gameplay experience. This doesn’t mean that you should be hesitant about making your own customizations, however. Personalizing each setting can only make your inputs better since only you know your play style.

Here are the best settings for Fortnite on Xbox One. 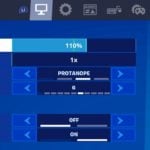 Before moving onto the controller options, we recommend switching your button layout, with Builder Pro’s. It’s the most preferred layout since it enables players to build faster and with more accuracy. Even pros like Sway prefer playing with it instead of the other options.