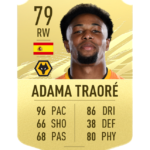 EA Sports released a list today that contains the 20 fastest players in FIFA 21.

EA has been making all sorts of lists with ratings since last week. FIFA‘s gameplay has been heavily based on Pace in the most recent editions, but it’s still unknown if EA will follow the same pattern in the next game. This list, however, will help you play with the fastest players in the game, whether it’s in Friendlies, Career Mode, or Ultimate Team.

Adama Traoré is one of the three players with the highest Pace overall, which is 96. The Wolverhampton Wanderers’ winger is known for his athleticism, which indicates that he’ll be faster in-game than any other player. But even though Adama is fast, he lacks Shooting and Passing stats.

The second-fastest player on this list is Kylian Mbappé from Paris Saint-Germain. The French star is FIFA 21’s global cover star and the best young player in the game, which makes him one of the best all-around cards in FIFA 21. Mbappé will surely be one of the best Ultimate Team cards and most likely the best player to sign if you’re a Career Mode fan.

The third player with 96 Pace overall is Alphonso Davies from Bayern Munich. The 19-year-old arrived in Bayern last season as a winger but was transformed into a full-back, which was a key factor in Bayern winning the European treble in 2019-20.

Here are all of the fastest players in FIFA 21, according to their overall Pace rating. This list won’t take into consideration cards that will be released for FIFA 21 Ultimate Team, where several new cards are added to the game mode every week.