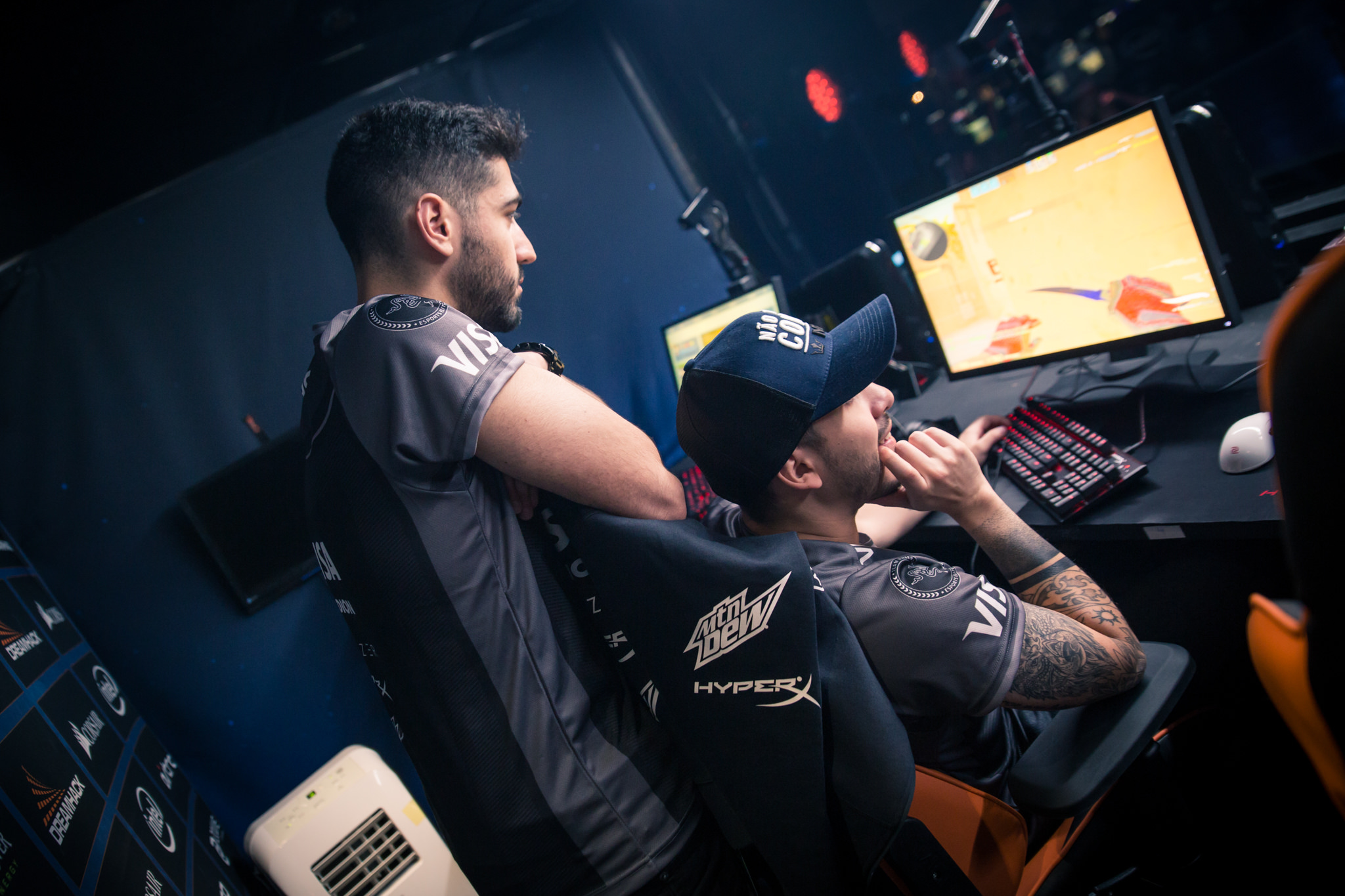 In 2017, a single piece of equipment, the UMP-45, has defined all discussions surrounding game balance in Counter-Strike: Global Offensive. While the gun hadn’t been touched since general SMG armor penetration buff in 2014, its presence in the professional scene has only very gradually increased over time until it suddenly took off and reached its near epidemic-level, economy-warping prime last spring. As such, Valve nerfed its damage in a May 23 patch. But there are still some concerns that its remaining strengths elsewhere in cost, kill reward, and armor penetration will continue to prop up it’s overstated relevance in the competitive scene.

Looking back at what we’ve seen in the month, can we say has their been a tangible decline in the UMP’s efficacy and play rate? And, more importantly, has the overall economic metagame improved accordingly?

To look forward, let’s first look back. When SMGs were originally buffed in October 2014 their acceptance within the competitive metagame wasn’t especially swift. Almost two months later at DreamHack Winter 2014, SMGs still were not always seen in the second round buy of the pistol round winner as is seen commonly today. Most teams still opted into buying five rifles (whether that be the AK, M4A4, M4A1-S, Galil, or FAMAS) with limited utility rather than the now-typical 1-2 rifles surrounded by SMGs with full nades strategy.

With time and some key nerfs to the CZ-75 and the TEC-9, the meta gradually moved towards the modern SMG and rifle buy in the second round in 2015. The UMP wasn’t the sole SMG used, however, and it wasn’t the most popular. There never seemed to be a clear weapon hierarchy in the quality of SMGs, with specific player preferences instead determining which weapon was purchased.

One player such as Wiktor “TaZ” Wojtas might prefer the P-90 while someone else such as Fernando “fer” Alvarenga might instead lean towards the MP9. It wasn’t until we were well into 2016 before the UMP-45 started to take off as the clear leading submachine gun. Players also learned it was decent economic replacement for the Galil or the FAMAS in rifle rounds with its ultra-cheap $1,200 price tag and hefty $600 kill reward. Ergo, the popularity of the UMP exploded.

To put the above graph in context, if the average map of Counter-Strike contains 180 kills, then players only found about 7 UMP kills per map at ESL One New York, but 18 with the same weapon at IEM Sydney.

This shift is profound. Unlike the original addition of SMGs into the metagame which mainly affected how the first few rounds of each half were played out, the growing willingness and capacity for players to use the UMP as a rifle alternative has far wider implications. Not only do we see more SMGs (now almost always UMPs) in the opening rounds of a half, the affordability and viability of the UMP-backed buys in later rounds has also become increasingly common.

And this shift has almost universally been seen as negative. It’s not some simple unfairness derived from an “overpowered” weapon. The increased frequency of UMP-laced force-buys makes economy far more brittle, which can hurt teams such as SK and G2 that prefer expensive, double-AWP setups. Also the near permanent possibility these pseudo full-rifle buys can ruin the ebb and flow of the game naturally created via the economy. If every round or near every round is a buy round, the rising action of the eco round that builds into the climax of the critical money-fuck round.

But this idea that the UMP is not just a good SMG but also a possible replacement for the FAMAS/Galil, Valve’s choice to increases the UMP’s damage falloff with range makes perfect sense. While its low-cost and high-armour penetration were far more frequently referenced as the gun’s most problematic features, decreasing the gun effectiveness at range might be the best way of limiting weapon use as substitution rifle. But the overall question still remains. Is the nerf large enough to have any noticeable effect?

There is some indication that the UMP is already dipping slightly in popularity.

According to stats provided by HLTV, in LAN matches occurring from March 23 to May 23, UMP kills accounted for 9.32 percent of all kills. Last month, that went down to 7.34 percent, which is a drop of about 3.6 kills in an 180-kill match. Now this 7.34 percent is still pretty far away from the 3.68 percent of ESL One New York, but if you look at the percentage of total kills accomplished by the UMP at the last few international LANs, excluding the Minors, there has been an encouraging trend.

Without getting into the thicket of margin of error, multilinear regressions, or Chi-squared values, it appears that there has been an apparent shift in trajectory that nicely meets our expectations. But looking at the popularity of the UMP in terms of total kill percentage can easily be misleading. This method does count UMPs bought, UMPs kept from previous rounds, nor does it try to measure the weapon’s efficacy when used. There is also the problems inherent to comparing one tournament to another. The level of competition obviously isn’t going to be exactly the same across all tournaments, and you expect the popularity of UMP to change given the specific teams in attendance, the resulting matchups, and the maps played.

Instead of looking at large data sets, perhaps it might be more beneficial to see how the exact same matchups play out before and after the UMP change to avoid many of these extraneous variables. Luckily, Astralis and Virtus.pro have played three near identical best-of-three series thus far this year with two occurring before the nerf and the most recent one occurring after. Unfortunately, the last map of this most recent series went to Mirage instead of Train as we saw in the previous two series, so we’ll only look at Nuke and Overpass here.

On Nuke, we see exact same trend in mirco as we see in the macro, but that doesn’t hold true for Overpass. UMP kills took a greater percentage of total kills, and while less UMPs were bought and used in the post-nerf Clash for Cash match, about the same amount were bought and/or used on a per-round basis. But with this every limited sample size, perhaps it’s more educational to look at similar moments across these map and matches rather than numerical outcomes.

For example, if you watch the previous Nuke games you’ll notice that the UMP was the only type of SMG bought in the second round of either half in the first two games. But the pattern doesn’t hold in the Clash for Cash match. In the second round, Filip “NEO” Kubski bought a MAC-10 alongside his team’s single UMP and three traditional rifles. Then in round 17, Virtus.pro again decided to diversify with Neo buying a MP9 alongside two UMPs and two rifles. The same story plays out on Overpass. No SMG other than the UMP was bought in the early half rounds in either of these two teams’ previous meetings on this map. Yet Neo again bought a MP9 in the second round of Clash for Cash’s Overpass and Peter “dupreeh” Rothmann did the same in round 17.

But this shift isn’t exactly what we might have hoped for. To “fix” the economy or the economic metagame the UMP probably should become a less viable substitute for a rifle, not a less viable SMG. And in this Clash for Cash match, we still saw plenty of instances where teams who didn’t have enough funds for a five rifle full-buy still go for the UMP+rifle puedo full-buy rather than electing to full-save or try the more traditional TEC-9 or upgraded pistol half-buy. Examples include round 22 on Nuke, and round 14 and 18 on Mirage. On the other hand, there were also a couple of incidences where a different sub-prime weapon was purchased in place of the UMP in these puedo-rifle rounds.

While clearly the nerf hasn’t dropped the UMP-45 into some Sarlacc pit of a dumpster, to say the change has had an inconclusive or negligible effect is probably overly pessimistic. Given the history of the UMP, it’s quite reasonable to expect that the full consequence of this change won’t be felt immediately. The adjustment period might again be slow or gradually over. That’s said, we have seen evidence (in big data sets and in controlled examples) where the UMP’s popularity and/or efficacy has dropped slightly even if it has hardly gone back to early 2016 levels or “fixed” the metagame in any dramatic way. The question moving forward is whether this trend will stagnate, revert, or continue in the coming weeks and months.

But we saw a very good sign this morning: in the first game of the next big premier LAN, the ECS Season 3 finals, neither FaZe nor OpTic bought a single UMP-45.