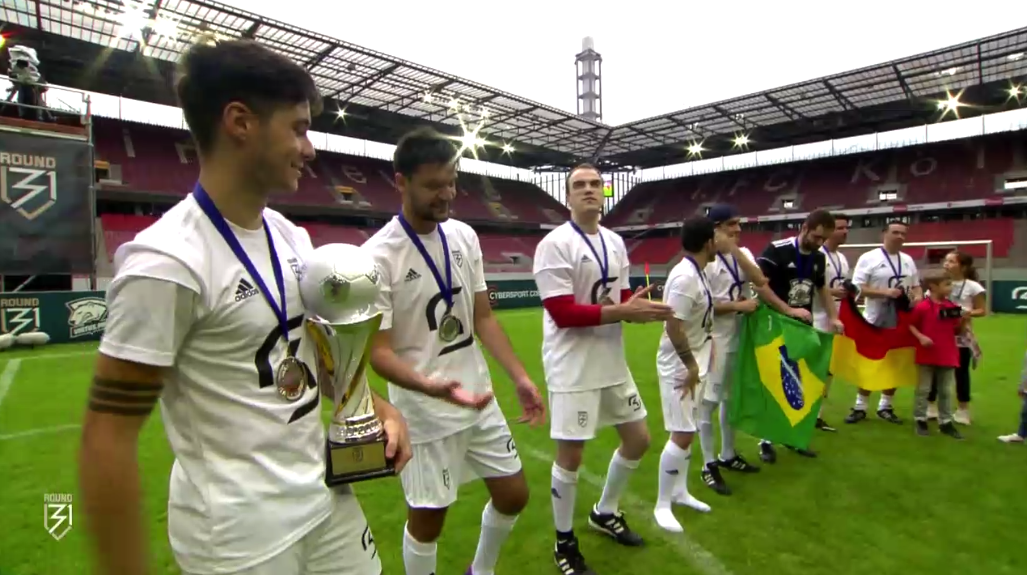 SK Gaming, the recently-crowned ESL One Cologne champions from Brazil, faced off against the Polish Virtus Pro roster in an exhibition match earlier today. But Counter-Strike: Global Offensive wasn’t the name of the game–it was soccer.

The two teams played six-on-six for 40 minutes on a miniature soccer field at the Rhein Energie Stadium in Cologne, Germany, which is home to the local FC Köln soccer team. VP sported all-black jerseys, while SK wore all-white jerseys, which is a big change from their typically black CS:GO jerseys.

VP’s Janusz “Snax” Pogorzelski and SK’s Marcelo “coldzera” David quickly traded goals in the first 18 minutes, giving VP an early 2-1 lead. The minutes following halftime were quiet until Jarosław “PashaBiceps” Jarząbkowski of VP earned a goal of his own in the 27th minute, after a one-on-one with the goalkeeper.

Coldzera blasted his second goal while under pressure at 3-1 in the 31st minute to bring his team back into the game. Shortly after, Pasha pulled off a one-on-two in the 33rd minute to stretch VP’s lead to 4-2.

Benjamin “Kane” Reichert, a co-founder of SK and former professional football player, was the great equalizer, with two goals in minutes 37 and 38—tying the game 4-4. Alex “TheSlash” Mueller, the CEO of SK Gaming, dealt the winning blow to VP in the final minute after winning a throw-in close to the goal. SK held their 5-4 lead in the closing seconds to win the match, a result that mimics their late-round heroics in CS:GO.

Following the match, the players of both teams were given medals for their participation in the exhibition. The captains, Gabriel “FalleN” Toledo and PashaBiceps, swapped jerseys, which is a tradition in professional soccer. SK won $50,000 by taking out the game, and will be donating 50 percent to a Brazilian charity and 50 percent to a German charity, according to SK’s Epitácio “TACO” de Melo.

Some could argue that SK’s former pro soccer star, Kane, was essentially “smurfing” against casual soccer players, but it doesn’t undermine the fact that VP blew a 4-2 lead in front of 150,000 concurrent viewers. Good game and well played, SK Gaming.