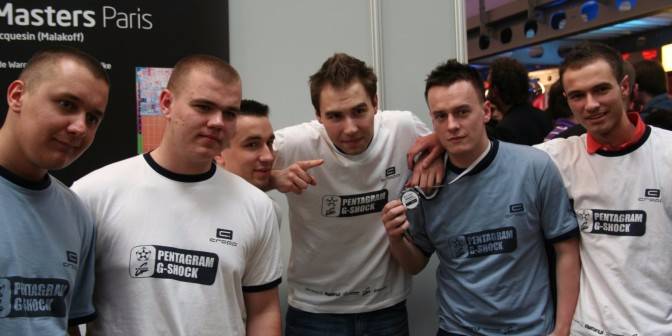 Recently, there was a reddit post about NEO being the first to play 1000 maps. What’s more is that TaZ is the oldest player on a top team and the first to hit 30. Sure, there was SirScoots, yes Scoots, but his era of Counter-Strike was vastly different. In an era where gamers are still struggling to find acceptance, TaZ is a monument to all that we have been trying to achieve. He proves that gaming is not just for children, nerds, and what other stereotypes and insults someone may throw at gamers. TaZ is not just some figurehead that is to be praised either. TaZ, along with NEO, have won the most Majors in all of Counter-Strike. They aren’t going to be matched anytime soon, and they still are trekking.

I have chosen 12, for the number of years that he has played competitively, important moments in TaZ’s professional Counter-Strike career. Ten of the videos are series and the other two are highlight clips. Unfortunately, TaZ’s career has gone on through some tough times in Counter-Strike history, and the VODs that I have been able to find are not all easy to find, in good quality, or in English. That said, I hope you enjoy them. Knowing that not everyone would want to watch all of them and that it wouldn’t be much of an article if I didn’t, I wrote a little bit about each of the series. Also, these videos follow no particular order.

To give you a bit of an idea of what to expect, I’ll tell you this much. Everything you have heard about TaZ, NEO, and the Golden Five is a bit untrue, and by that, I mean under exaggerated. Going back to watch these games, I was absolutely amazed. These were some of the most thrilling games to watch, and that is being removed from the events now ten years after the fact, in some cases. It’s pretty amazing to think that someone can stick to something for this long, go through so many changes, and still be on a top team.

TaZ has gone through many changes and adaptations to stay on top. He played as a star at the beginning of his career. In the earlier days of Counter-Strike, believe it or not, he and NEO were rivals, but in order for Poland to build a world class CS team, they both knew that they would have to team up. That they did, but it did not come without its fair share of problems. You may hear every so often about Virtus Pro changing up their roles and who does the calling, often switching between NEO and TaZ. Currently, it’s TaZ who makes the decisions for the team, and after they joined together, that’s mostly what he did. He was the new direction for the team, until kuben took over towards the end of CS 1.6. TaZ was also the secondary carry in his teams with NEO, and that lasted until pasha came on and developed his aggressive playing style.

Going back a bit, I mentioned that TaZ and NEO were at odds, and if you look closely, they still show that to this day. TaZ is the loud, aggressive, personality while NEO is more of the quiet type (quite an opposite of their in-game styles). I may be leaving you wondering why I am talking so much about his team, and that’s because TaZ was the team. TaZ has been the emotional, decision making, force of his teams. He isn’t just the guy who shouts at the monitor or tells his fans to stop booing olofmeister; he is a leader. And to see the material results of a leader, we look to his players.

This was a very close series overall. It was going back and forth on classic maps like Train, Nuke, and Inferno. This game was pushed to a high level of play through the intense effort put forth by both sides, but what led Pentagram to win it was NEO’s amazing level of play. In this game, you may recognize Astralis’ coach, Astralis; he is considered by many to be a great CS 1.6 player.

The first map played in this clip is known to be one of the best Nuke games ever. After bouncing around with a few orgs, as the Poles had difficulty finding sponsorship, they played on their own in their own temporary org, AGAiN. In the cushy climate of esports today, most people would have given up, but for these players uncertainty of how you will get to the next tournament was just part of the job. With that determination, and of course a massive amount of skill, they were able to win the game. Game 2 was also a nail biter. It began with Fnatic asserting dominance on Train, but it ended with the Polish team winning the map and match.

You might remember this one. Several months ago, Thorin posted a similar video to this clip where he went up to NEO for an interview afterwards. Since this is a short clip, I will let it speak for itself, and in case you are looking for the rest of this series, it can easily be found on HLTV.org.

This series is filled with games where the Polish team needs to dig itself out of a hole. These guys have nerves of steel. Again and again, they fight these uphill battles and win, and even though they have so many trophies, they often are an underdog team. If the quality were better and if there were English versions, companies like ESL should be broadcasting these legacy games.

The pace for much of the series is that Pentagram would get a few rounds, then Ninjas in Pyjamas would get a few themselves. It kept up this pace on the first two maps, looking as if it could go either way, until Train where–like always–Pentagram just took it away. With all of these amazing performances from 1.6 on Train, no wonder why they are good on it today. The Polish team has such a depth and breadth to their map pool that, at times, they can seem a bit like an in-form Fnatic.

“Ahhh, finally, a game with good graphics” some of you will say. This is one of my three series from CS:GO, and it was one of the two semifinals. Perhaps, the reason I chose it was that it was something recent and extremely moving. As I was watching this game, there were moments where I was nearly out of my seat, and by that, I do not mean going off to get a snack or use the bathroom. VP was no easy opponent, but for Fnatic, it shouldn’t have been a problem. Fnatic was no longer a god on Mirage, but it felt like a weak performance from them. This second map, Inferno, was crazy. This map would definitely make it on a list that I would recommend a friend to watch. They keep going back and forth, and Fnatic manages to come out with a chance to fight for the third map. Virtus Pro gains a fair number of rounds on their T side of Cobblestone, but it was not enough to satisfy the crowd. This is where the historic booing takes place and where TaZ comes out to defend his opponent.

This moment we all know to be a very special one for Virtus Pro. They win the hometown event and in remarkable fashion. Before EMS One Katowice, the team was in a very bad slump and had just moved onto Virtus Pro. VP with their famous “plow-mode”, which NiP could not stop, prevented the insecurity that they faced back in 2009 through a Major tournament victory.

This tournament was the last Major in 1.6. I guess it’s only fitting that the biggest underdog and the team with the most Major titles takes it, but these delightful patterns do not always win out. Na’Vi was an unstoppable team at the end of 1.6, and it seemed no matter what fate may desire, they were going to win. However, that was not the case. That day, whatever force that brought the Poles to win so many Majors in the past, be it fortune or virtue, was with them.

This one is probably a head scratcher for you, but the reason why I chose to include it is that it is the epitome of Virtus Pro. They go through rough periods, and they know that they won’t change up the roster because it works. It isn’t working though, and the removal of a player seems imminent. Finally, once they are up against the ropes, they break out and win a tournament, and thus, beginning the cycle again. Although it wasn’t the worst losing streak they had, it definitely goes among their best recoveries from one. In a very stacked tournament, they managed to make it all the way to the final, and once there, they embarrass Titan with a two map sweep.

Just as Na’Vi thinks that they can leave in peace, ESC takes the very last proper 1.6 tournament away from them. I say proper because the other tournaments’ prize money was hardly anything and many good teams/players were moving onto CS:GO. If there was a time for the remaining CS players to make their point, it had to be at IEM VI. Both teams had their eyes on the prize, ever so greatly fueling the flames of competition. In the end, like many of these series I have shared with you, their talent and determination allow them to hoist the cup. These sorts of games are the reason why many people still give props to NEO and TaZ. They are irreplaceable, relevant, and have made the point of them being a force to be reckoned with time and again. They now have proven this for twelve years!

Happy birthday, TaZ. We thank you for the amazing and enjoyable Counter-Strike you have brought to us. Good luck to you in all that you strive for.