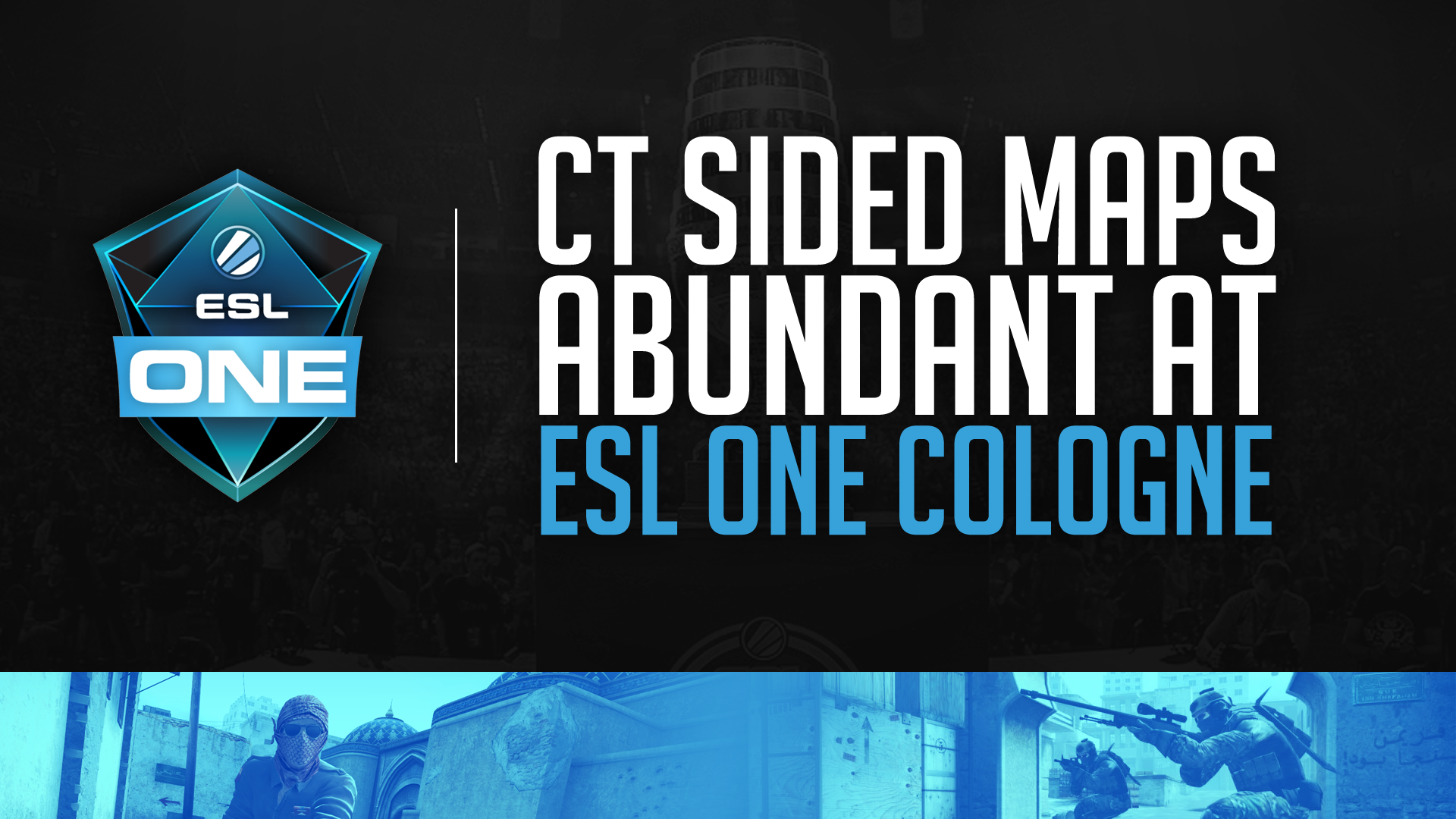 With ESL One Cologne still fresh in the minds of fans, I wanted to look at how Counter-Terrorist/Terrorist sided the map pool was. So, without further ado, let me explain how I produced the statistics for what each map’s favoured side was.

Firstly, all maps that seemed to be a mismatch in skill levels between the two teams were not looked at. This was defined by any map being played that finished with a score of under 16-8. My reasoning for this was that this allowed 24 rounds to be played, which would be enough for any two fair teams to have a reasonable run on each side. Had I included maps that ended with a score under 16-8, games where a heavy overdog of the match started on the least favoured side may have skewed my results, as the superior team may have picked up numerous rounds on the weaker side due to them outmatching their opponent, rather than how the map is built.

After segregating the matches I deemed fair, I went on to look at what percentage of the total rounds won had been secured on the Terrorist side. Take Fnatic vs G2’s match on Train in the group stages for example. The score ended 16-13 in favour of Fnatic. That means that a total of 29 rounds were won; 16 by Fnatic and 13 by G2. Out of these 29 rounds, 14 of them were won by a team on the Terrorist side. In a percentage, it works out to be 48% of the rounds won were done so by the Terrorist team. This means the map was slightly CT sided.

When calculating the percentages of rounds won by Terrorists, I rounded the number to it’s nearest whole. So 33.3 recurring would become 33%.

Dust II was played four times at the ESL One Cologne Major, but only twice was the scoreline above 16-8. In these games, the iconic map showed it is truly an even playing ground, as the map averaged out to have 49% of rounds won by Terrorists, keeping its reputation as a balanced map.

Like Dust II, the recently reintroduced Nuke only had two games played that had a scoreline over 16-8. In these games the map showed that, although it had been changed, it remained a CT sided map. The Terrorist sides only managed to win 43% of the rounds on Nuke.

The map which is widely known in the community as one of the easier maps for teams on the attacking side, Cobblestone showed that statistically it is a Terrorist sided map. Despite recent changes to the map, which included a set of stairs on the B site, CT’s were still overwhelmed. A whopping seven games were played on Cobblestone that had a score of 16-8 or more, making the figure of 55% of overall rounds being claimed by the Terrorists a valid statistic.

Offering a fast and difficult to breach rotation zone for the CT’s, Overpass is still regarded as a CT sided map. Three games were played on Overpass which were deemed even enough to be included. From these, the Terrorists managed to win 47% of the rounds, keeping the map CT sided but only by a small margin.

Mirage brought up an interesting figure due to a long battle between the rivals of Astralis and Dignitas. In one of the three even games played on Mirage, the rounds won by the Terrorists were very disproportionate to the other games. When Dignitas played their Danish counterparts Astralis, a massive 21 from the 26 rounds played were won by the Terrorist side, with both teams having excellent attacking halves.

Because of this, the overall average for the map turned out to be in favour of the T side, with 52 percent of the rounds played in the three games being won by the T’s. However, due to the abnormal result between Astralis and Dignitas, this number may not be accurate. Bear in mind that the other two even games on Mirage were heavily in favour of the CT’s, with the defending side winning 62% of the total rounds won.

A surprising result to me was that in the three even games played on Cache, the results favoured the CT’s quite strongly. Over the three maps, the defending sides won a total of 65% of the rounds that were played, leaving the Terrorists to only pick up 35%.

A total of six even games were played on Train, where the score ended as being 16-8 or over. In these games, the map proved to be diverse and would sometimes end up being dominated by Terrorist sides and sometimes CT sides. However, the average across the six maps came out as 47% of the rounds being won by the Terrorists, meaning the map, statistically, was CT sided.

I am aware that some of these figures seem inaccurate compared to common perceptions of the maps, but I sought to find if the maps in the Major were CT sided and this is how I did it. If you have any suggestions on how you would improve this process, I would love to hear them. You can leave feedback on this article or on either @GAMURSCOM or my personal twitter below.