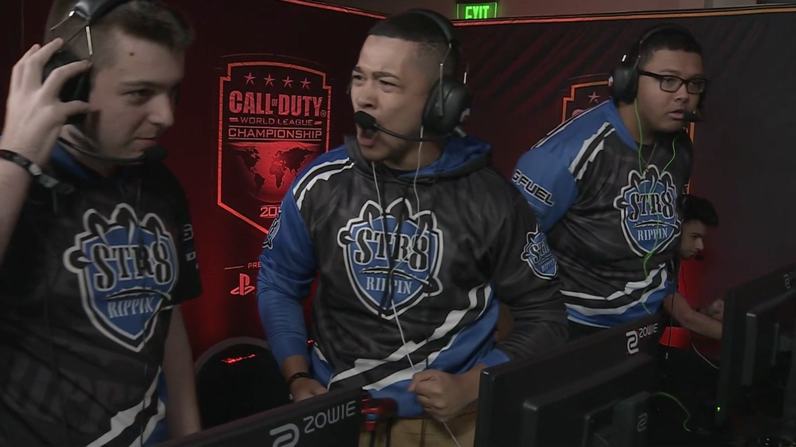 Group F was predicted to be one of the most intense pools at this week’s Call of Duty World League Championship—and it’s already living up to the hype.

Str8—Jeremy “StuDyy” Astacio, Richard “Ricky” Stacy, Brandon “Dashy” Otell, and Donovan “Temp” Laroda—started the series with a dominant 250-142 win on Retaliation Hardpoint. Ricky surprisingly led the way for Str8 with a 25-16 performance, but Temp wasn’t too far behind, producing a 22-14 scoreline.

The series then transitioned to Throwback Search and Destroy. Both teams traded rounds back and forth at the start, until EG’s Jared “Nagafen” Harrell pulled out a sniper. Known for his proficiency with this weapon, Nagafen picked up several first bloods as EG built a 5-3 lead.

But Str8 wouldn’t go down without a fight.

The young squad fought back to force a round 11—and in the final round of this map, Str8 just dismantled EG. StuDyy used his Reactive Armor payload ability to bait out Christopher “Parasite” Duarte, and Temp swooped in for the first blood. Str8 then went through the rest of the round without losing a single player on their team to take the second map in this series 6-5.

EG was clearly demoralized from this loss, but despite facing a 2-0 series deficit, they put the first point on the board in Frost Uplink. But that was also the only point EG scored throughout the entire game.

Str8 will look to improve to 2-0 in their next match when they face off against Tainted Minds at 10am ET on Thursday, Aug. 10.