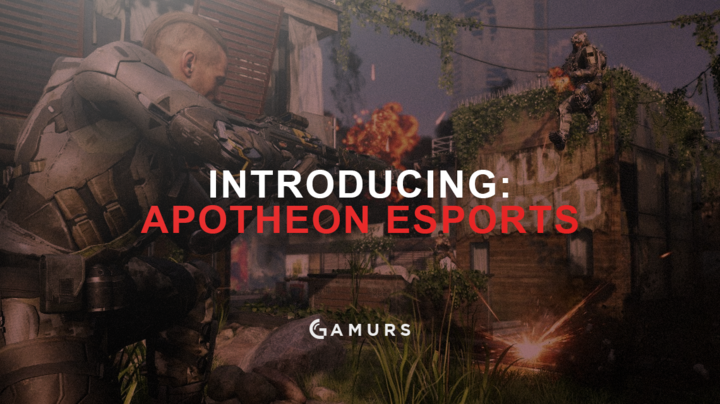 Apotheon Esports has been a name that many have probably heard, but not remembered.

Some teams probably remember playing (and getting beat by them) in the MLG NA 4v4 Pro Point Tournaments. Most people didn’t give them the respect they deserve, and now they’ve burst onto the scene and have shown their potential to be one of the major dark horse teams in Call of Duty.

The team’s North American beginning came earlier this year, with a roster consisting of:

These four players were picked up by AES and qualified for Stage 1 of the North American Call of Duty World League. Soon after, the team was bought by H2k-Gaming.

Fast forward to late-June, when AES picked up their current roster – swap out Mayhem for Joseph “Destiny” DeLillo – played a few online tournaments, then went to MLG Orlando 2016 and placed top-12.

Despite this quick burst, AES doesn’t have the star-studded background or veteran presence that many teams need to make a successful run at a tournament as tough as MLG Orlando in such a short time. But, what makes AES so different from other amateur organizations that attempt this type of run all the time?

“I think AES cares, unlike some other organizations that were in the league…” AES player Matt said. “I think they have the potential to do everything and more pro organizations do, we [the players] just have to give them that potential.”

The manager of AES, kRooKya, receives high praise from his players and is one of the more open and caring managers in CoD. Despite having a career, kRooKya is able to give the team and community plenty of attention.

“Balancing the two isn’t all that difficult due to my work outside of esports being finished by the time the community comes alive at night,” said kRooKya. “This schedule allows me to maintain proper, dedicated focus on both of my passions.”

Many of CoD’s top owners are involved in the community and exude passion about their team and esports in general. EnVyUs’s hastr0, FaZe’s Temperrr and OpTic’s h3cz are three prime examples of how an owner’s passion, drive and integration with the team inspires effective performance.

kRooKya, like many other top owners, doesn’t overwhelm his team with objectives. “The objective for this team is simple: Take it one tournament at a time,” said kRooKya. “They’re all phenomenally talented with good heads on their shoulders. We want nothing but long term, consistent success.”

While care and support from management is important, ultimately it comes down to the team to perform on the sticks. Talent, chemistry and communication are three factors that all top-tier organizations in any esport, traditional sport and company strive for.

“I think it’s just our raw individual skills,” said AES player Prestinni, when asked what allows AES to match up so well against pro teams. “We all know what we’re doing, for the most part, in every single game mode.”

This confidence is important when matching up against pro teams. Having a solid mindset is always important, and AES doesn’t back down from any challenge, despite their lack of notoriety. At MLG Orlando, the team faced off against Team Allegiance (who was expected to breeze through the Open Bracket – won 2-0), VexX Gaming (Open Bracket powerhouse – won 2-1), Team Infused (EU CWL powerhouse – lost 3-0), H2k (NA CWL team – won 3-0), Ground Zero (ex-Dream Team – lost 3-0), SetToDestroyX (Open Bracket team – won 3-1) and FaZe Clan (NA CWL powerhouse – lost 3-1).

In their victories, AES was dominant and very rarely missed a beat. In their losses, AES didn’t give up, kept it close and aimed to do better. The team has a growing bond, and believes to be stronger with the addition of Mayhem after MLG Orlando.

Look out for them, because they’re only getting better. As said best by Matt, “I love playing with these guys and am 100% confident in their ability to play the game and play together as a team.” Don’t discount them; they’ll make you pay for it if you do.

What are your thoughts on Apotheon Esports? Do you think they will continue to grow and qualify for CoD Champs? Lets us know in the comments below and be sure to follow our Twitter – @GAMURScom – for more esports coverage.