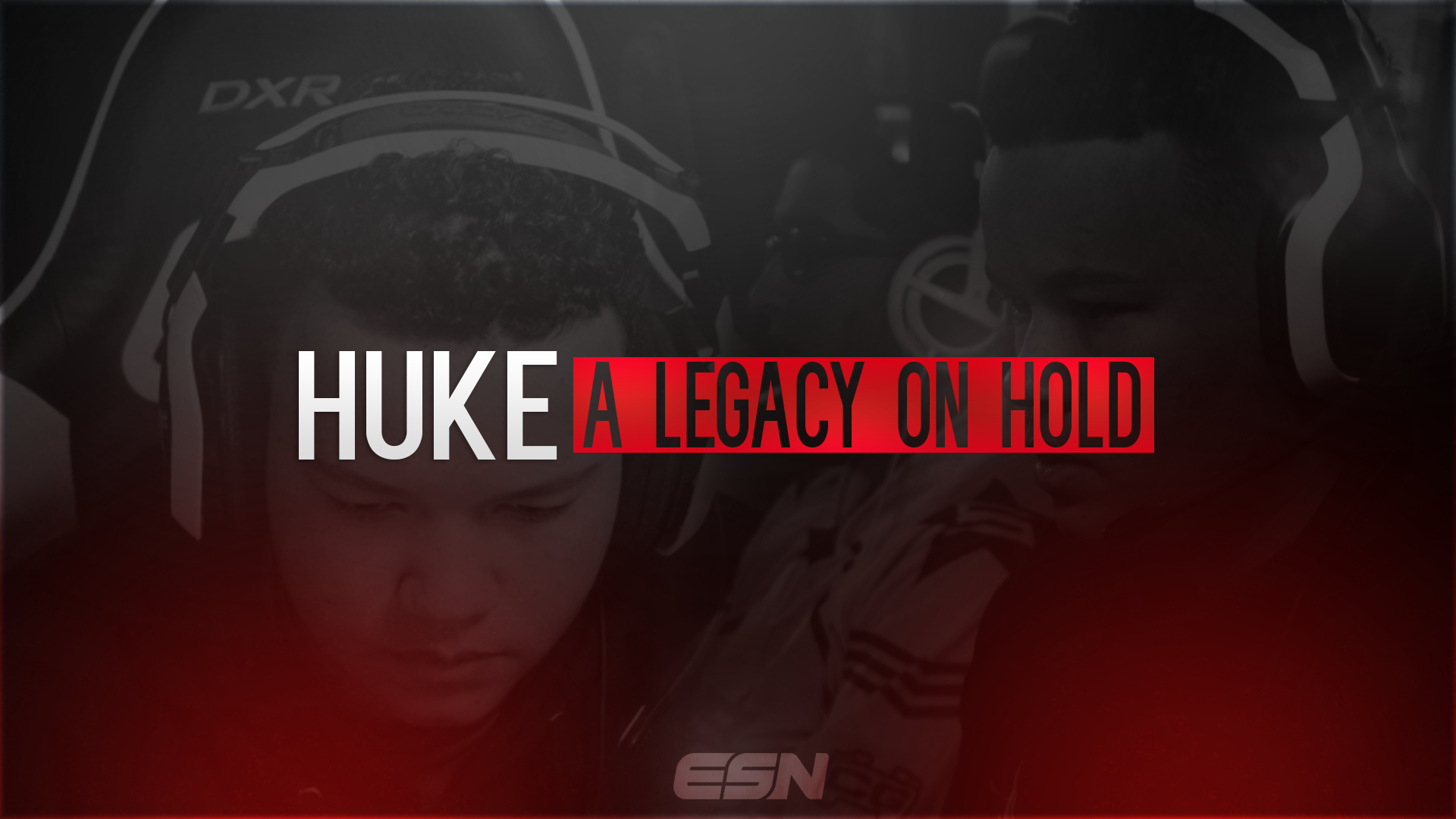 In traditional sports, a player’s legacy is defined by their ability to perform in the clutch and winning championships. While it takes several years for some players to begin their own legacy, others are able to get off to a hot start in the beginning of their careers and carry that with them for the rest of their time as a professional athlete.

While these are two relatively recent examples of players getting off to a good start in their careers, the point is that it takes time to build one’s legacy. The same concept of building one’s legacy carries over into the world of eSports, and especially holds true for one player in particular who emerged on the scene as a rookie in Call of Duty®: Advanced Warfare . This player is none other than Cuyler “ Huke ” Garland.

While some players are fortunate enough to win at the first MLG event they ever attend (i.e. Seth “ Scump ” Abner at MLG Dallas 2011 for Call of Duty®: Black Ops ), it takes other players many years to win their first event (i.e. Nadeshot winning his first MLG event at the 2014 MLG X-Games despite being a professional Call of Duty player since Call of Duty® 4: Modern Warfare ).

Regardless of championships, the other important aspect of one’s legacy is performing in the clutch. In Call of Duty, this is especially true. Players are remembered more for getting a great 1v3 clutch in Search and Destroy or for pulling off an insane flag capture as time expires in overtime. Every great player has these defining moments.

With each and every installment in the Call of Duty franchise, there are always new players who are trying to make a name for themselves within the community. In my eyes, Huke is on the cusp of cementing his legacy in Call of Duty history, but that may be on hold for a few years after the new Call of Duty World League established the rule that you must be 18 years of age or older to participate. Huke recently celebrated his 16th birthday, which unfortunately means he is two years and two more Call of Duty titles away from being old enough to participate in the new World League structure.

However, this does not take away from the tremendous start to Huke’s young and promising career. Huke started out this year of Advanced Warfare as somewhat of a myth. Before the first LAN event of the year, a bunch of players were talking about this “young kid” who would drop huge numbers online. While some players just shrugged this off as yet another kid who was only good online, they would soon come to realize that Huke was much more than that.

In his first event of Advanced Warfare, Huke placed top-sixteen as a member of Team Carnage . While the team name may not sound familiar to many readers, Huke’s individual play stuck out, as he led the entire event with a 1.21 K/D in 11 maps played.

Huke’s impressive performance at MLG Columbus opened the eyes of many in the community and began to open up many possibilities in what appeared to be a very promising future. Huke got the opportunity to join Stunner Gaming for UMG Orlando 2015 , which is the event that really helped to start Huke’s professional Call of Duty career.

Huke and Stunner would go on to place second at this event, which was a surprise to most of the community, in part due to the young names like Huke on Stunner’s lineup. Huke has even gone as far to say that UMG Orlando was his favorite event thus far in his career.

“My favorite event so far has been UMG Orlando, just for the simple fact that it was my first pro placing and we had so many intense matches,” Huke said. “My favorite moment was definitely at UMG Orlando against Denial to get into the finals for my first time. The adrenaline I experienced during that Comeback Uplink was insane.”

However, this was just the beginning for Huke, who would end up joining Aware Gaming for Season 1 of the MLG Pro League following UMG Orlando. With Huke’s help, Aware placed fifth in the regular season and went on to finish top-six at the MLG Pro League Season 1 Playoffs . Huke still performed well as an individual, carrying a 1.11 overall K/D in 13 maps played, which was good enough to be the seventh best overall K/D at this event.

Following the Season 1 playoffs, Huke ended up leaving Aware after getting his first opportunity with a brand-name professional organization; FaZe Clan . Due to Huke’s young age, he was obviously unable to play at the 2015 Call of Duty Championship , or any events overseas, so his first event with FaZe was UMG California 2015 , where he placed second once again. In 40 maps played at UMG California, Huke had an impressive 1.18 overall K/D, the sixth best at this event.

After the MLG X-Games, Huke would move on from FaZe to join another big organization; Denial eSports . Huke started his time on Denial with a third place finish at UMG Dallas 2015 , and would then go on to place second for the fourth time in his career at UMG Washington D.C.

Entering Season 3 of the MLG Pro League as a member of Denial, Huke had basically become a household name for Call of Duty fans throughout the world. There were many issues with Season 3 of the pro league, including multiple DDoS attacks on players, so a tenth place finish in the regular season for Denial does not hold much merit. Denial would then place top-six at the Season 3 playoffs, but Huke stayed loyal to his squad and continued to play for Denial heading into the 2015 MLG World Finals, which would be the final event of Advanced Warfare.

Now by this time, the Call of Duty World League had already been announced, so young players like Huke were heading into New Orleans knowing that this could quite possibly be their last major event for a couple of years. However, this clearly did not derail Huke’s motivation and preparation, as he ended Advanced Warfare with yet another second place finish, his fifth of the year.

Once again, since Huke is not 18 years old, he was unable to play at CoD Champs this year. Thus, the 2015 MLG World Finals was by far the biggest event of Huke’s young career, with only the MLG X-Games somewhat close in comparison. And when the lights shone the brightest on the biggest stage, Huke continued to perform in the clutch.

In arguably the largest event of his career, Huke put up a 1.14 overall K/D in 35 maps played, the sixth best K/D at the event. Huke also averaged 35.32 kills per respawn and a 1.18 Search and Destroy K/D, as well as 141 total Hardpoint captures, the second highest total at the event.

While some players in the community would probably constantly boast and brag after posting such impressive statistics on a consistent basis, Huke remains mature beyond his age, stating that his hard work and dedication is what has got him to where he is today.

“I think what made me good in AW is how much time I put into it from the beginning to end,” Huke said. “Putting in hard work and receiving results is a great feeling.”

Everyone has been asking Huke about what his plans are for Call of Duty®: Black Ops III since he won’t be able to compete in the Call of Duty World League, but Huke kept his answer short, sweet and to the point.

“Well I’m going to try to go to every open event I can and will be playing with other underage players,” Huke said.

Some other notable underage players that Huke has played with in the past and most likely will continue to play with heading into Black Ops III include Donovan “ Temp ” Laroda and Thomas “ TJHaly ” Haly. However, despite his young age, Huke continues to look at the positives and actually support the decision of an 18 and over age restriction.

“I understand why they have the age restriction, so there is no reason to be mad at them,” Huke said. “Yeah, it’s unfortunate that I can’t play in the world league and other events, but I’m sure this will help COD’s growth long term.”

Huke remained positive when asked if he would consider switching to another professional video game, as well as when he provided his personal expectations for Black Ops III.

“I would consider switching to another FPS game such as Halo, especially if I am unable to attend any events at all,” Huke said. “But, if I go into BO3 with the same mindset as I did in AW, I think I will be just as good or better since I have more experience now.”

Finally, as the world of eSports continues to grow and develop, Huke realizes his duty as a role model for other young players aspiring to become professionals, and he had some great words of encouragement for these players.

“I think one of the best traits you can have when trying to rise through the amateur scene is your willingness to learn,” Huke said. “If you can take criticism and play to fix your mistakes and improve your gameplay, it goes a long way.”

Despite his young age, Huke was arguably one of the best and most consistent players in all of Advanced Warfare, and quite possibly the best rookie in the community. Huke was certainly able to open eyes throughout the Call of Duty community this year, and a lot of the older players are probably happy that they don’t have to compete against such a talented player in the new World League. Even though his legacy might be on hold for now, this young slayer will definitely be back when it matters most.

Where do you rank Huke as a player in Call of Duty®: Advanced Warfare ? Do you think he will be back with a vengeance after his 18th birthday? Let us know by commenting below or tweeting us @eSportsNation .